It's a Big Move, Since China's Hot Social App Has Been Treading Carefully on Ads Until Now
READ THIS NEXT
Watch: How Discord's CMO is wooing more than gamers
WeChat's welcome screen.
Credit:

WeChat is huge in China – it's the ubiquitous all-in-one social app that's a stand-in for WhatsApp, Facebook, Skype and Instagram. But it hasn't been easy for brands to figure out.

Tencent, the Chinese internet giant that owns WeChat, has been committed to user experience, proceeding cautiously with monetization since it launched in 2011. And the WeChat environment has been mostly ad-free. Brands can interact with users through official accounts, though they're quite limited in how often they can reach out to their fans.

This week, though, WeChat made a big move, testing ads in its "Moments" feature, which is similar to Facebook's news feed.

Jason Hong, planning director at Tencent, unveiled the house test ads in a LinkedIn post: "Finally can take the wraps off," he wrote, asking for feedback. The posts are marked "promoted." Their content appears to be an explanation of the test ad format, and read, in part: "We are trying to make some changes."

Recipients said it appears people can "like" and comment on the test ads, and also hide them.

WeChat said in November that it has 468.1 million monthly-active users, and most are assumed to be in China. Its grew 6.8% from one quarter earlier, which was slower than in the past.

The mobile app has passed Weibo, China's Twitter, in part because Weibo became flooded with commercial ads, turning people off. If WeChat is being cautious, it's because it learned from that experience.

Some brands have had better luck than others with their WeChat official accounts. While posts from Starbucks or local mobile phone player Xiaomi typically get 100,000-plus views, others get lost. Most posts this month from Lincoln, the car brand that's a new entrant into China, had fewer than 2,000 views.

Andrea Fenn, founder of Shanghai digital agency Fireworks, said "WeChat for now has been a very strange platform -- it's something big that consumers use, but there hasn't been a clear way to plan out some marketing strategies in the platform." 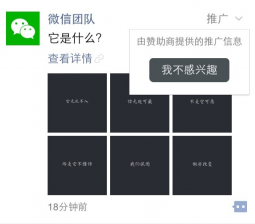 This WeChat test ad popped up on users news feeds.

If brands can buy ads on Moments, "it makes the platform much more reliable, it's suddenly a platform you can look at as a media channel," said Mr. Fenn, whose agency typically works with travel and luxury brands. On the other hand, he said, it will reduce the edge the platform has for being "tailored around people and not around marketers -- and that's why people love it. Ever since the beginning it's been a platform that does not envision spamming, it's just about me and you having a conversation about things we actually care about."

Chao Cheng, senior partner at marketing and business consultancy SinoStep, said that even before the move, users had been concerned about commercialization on the platform, since many small online businesses have been using the Moments feature to sell goods. Mr. Cheng, who spotted the WeChat house ad and blogged about it, suggests Tencent would like to regulate what happens on Moments.

The new ad format wasn't the only WeChat news of the day: State media reported that 133 public accounts had been closed for "making up stories and spreading false and illegal information about the Communist Party of China (CPC) and the nation."

Concerns about Chinese censorship and monitoring may be one reason WeChat hasn't spread into overseas markets as fast as Tencent had hoped; in November Tencent revealed that it had cut WeChat advertising in the West because of slow adoption there.