What happens if Microsoft buys TikTok, and where brands go if the app is banned in the U.S. | Ad Age
Skip to main content
Sign In Register

Deal with American tech giant would bring stability, but if it doesn’t happen, there are rivals waiting in the wings
READ THIS NEXT
Brand safety report reveals the dangers for advertisers on platforms like Facebook and YouTube 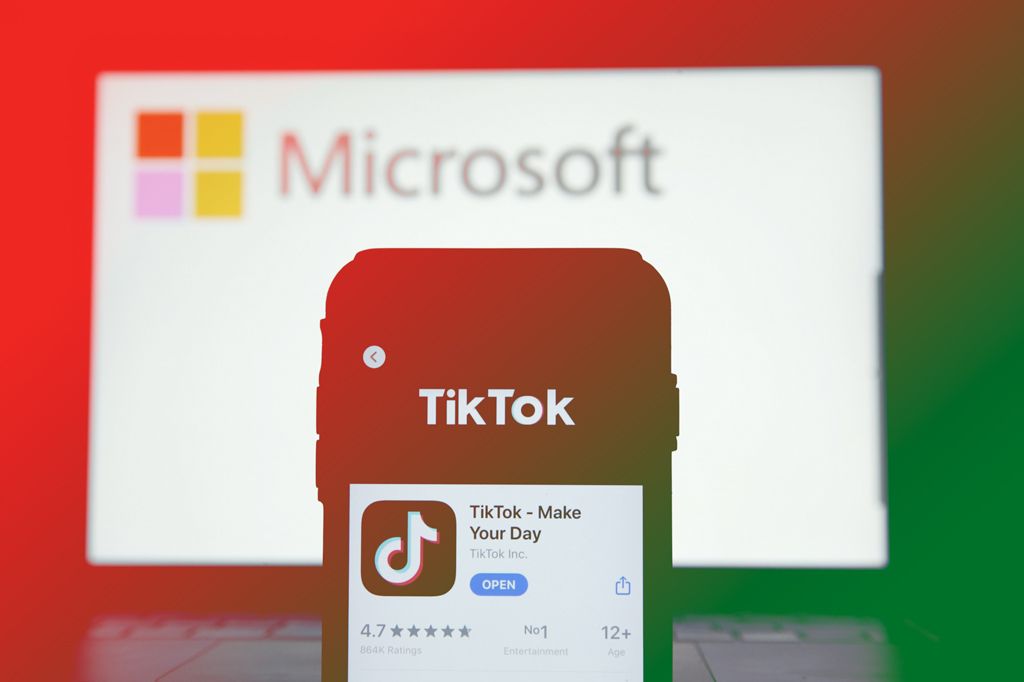 Microsoft set a clock on its TikTok negotiations that ends Sept. 15.

TikTok is caught in a political maelstrom, but advertisers aren’t jumping ship. They are preparing the lifeboats, though, just in case.

The Chinese-owned app that rose to stardom in the U.S., has become a bankable channel for marketing to the highly coveted Gen Z audience. But it now finds itself in the middle of bizarre fire sale because President Donald Trump called the app a national security threat.

On Monday, TikTok’s owner ByteDance was in negotiations with Microsoft to sell off the U.S. portion of its business to appease the U.S. government. Microsoft set a deadline of Sept. 15 for TikTok's Chinese owner and its American investors to close the deal.

If the sale goes through, social media marketing leaders say it would be the best outcome for TikTok and brands. They say the uncertainty swirling around the app would dissipate. Many brands have jumped into TikTok marketing without hesitation, but there are others that have stayed away while it remained under a veil of suspicion.

Now, brands that are on TikTok’s platform are calling their marketing teams to get status reports on whether ad campaigns are still good to go. Also, Brands and video creators are looking for new outlets just in case the ban happens. Brands like Chipotle are dabbling in TikTok rivals like Triller, while keeping close watch of the TikTok situation. Creators are looking for alternatives emerging from heavy hitters like YouTube and Instagram.

As of Tuesday, TikTok’s future was still far from fixed. Axios reported that Apple could join the bidding, although an Apple spokesperson said the company was not interested. It shows that there is still a ways to go before TikTok’s fate is decided. Ryan Detert, CEO of Influential, a social media influencer marketing platform, says that he is telling brands that it is “highly likely” that TikTok gets sold by Sept. 15, whether to Microsoft or another as-yet-unknown stalking horse.

What would Microsoft ownership mean?

If Microsoft buys the app, popular among millions of U.S. teens, it would be a victory for the tech giant that is looking for more inroads with millennials and Gen Z. Microsoft would also be a stabilizing force for some brands that want to tap that audience, but have been worried about the political turmoil.

“It would obviously allay fears about Chinese ownership,” Detert says. “That’s the good news; that despite all the hubbub it would take away that narrative.”

With Microsoft as owner, holdout brands might want to engage, and more consumers might be willing to download the app, says Joe Gagliese, CEO of Viral Nation, an influencer company that works with creators and brands to market on social platforms including TikTok.

“What Trump did by saying he was going to shut it down might be the best thing that ever happened to the app,” Gagliese says. “Because if Microsoft were to jump in there as an owner, consumer sentiment around it would go through the roof. I think brands would spend a lot more on it because it’s much more trusted.”

Gagliese says that if Microsoft can pick up TikTok, it would help secure its position with advertisers. It would bring stability to the ad platform, since Microsoft knows the U.S. market. “ByteDance is a sharp group, but they’re not Microsoft,” Gagliese says. “When these Chinese companies try to figure out media in the West, it’s very different than what they’re used to, so I think the media potential on TikTok, they haven’t even unlocked it yet, and Microsoft can expedite the process.”

Advertisers say that Microsoft would bring a new sense of confidence in working with TikTok, but there is always a risk that the new owner saps away some of the youthful energy of its hip acquisition.

“Short term, if it’s sold to Microsoft there will be a bit of relief that the security issues and threat of banning goes away,” says David Campanelli, EVP and chief investment officer at Horizon Media. “Long term, I think there is always a concerns when a legacy company buys a young, relevant, cutting edge brand, that it changes things and it stops being ‘cool,’ but that is a down the line concern.”

For creators who have grown dependent on TikTok for their supersize follower counts and massive amounts of views, they say that so long as Microsoft doesn’t dramatically change how the app works, they would stick around.

“As long as the app is still around, I don't care who owns it," says Isabella Avila, 21, who has more than 8 million TikTok followers. "As long as they're not making any change, and as long as it's just a back-end thing, so that Trump doesn't take it away. I'm fine with it."

For now, plenty of brands are still running full steam ahead on TikTok.

Chipotle has been a major TikTok booster, working closely with its top creators like Charli D’Amelio, the U.S. teen who grew wildly popular on the app. Tressie Lieberman, Chipotle’s VP of digital and off-premise marketing, says TikTok is still a great place to interact with fans. But Chipotle is “monitoring the conversation taking place surrounding the future of TikTok,” Lieberman said in an email statement.

Chipotle is experimenting with some of the other hot apps, too. The company just did a brand deal with Dillon Francis, a video creator, to launch an account on Triller. “We’ll test, learn and listen to see if Triller is a strong place for positive engagement,” Lieberman said.

For more than a year, TikTok has been making a concerted push in the U.S. to lure brands. Chipotle, Walmart, Kind, Nike, Ralph Lauren and others have staged campaigns on the app.

TikTok has also developed a self-serve ad platform, which is an automated online system to bid on ad space, similar to Facebook, Google, Twitter and Snapchat. Brands can buy video ads, sponsor hashtags and team with TikTok creators on campaigns. Hashtags are used to highlight trending events and topics that can catch fire on social media platforms, and brands seek to develop their own.

Over the weekend, brands like American Eagle, Netflix and Got Milk all ran campaigns on TikTok, Detert says. “So ... nobody pulled out in fear, and all the brands we spoke to said, ‘Great we just want to make sure our campaigns are good to go.’ So brands themselves are still seeing the power of TikTok. So there’s no stigma.”

That doesn’t mean all brands are fully on board. Gagliese and other marketers say that there are advertisers that have been timid about TikTok while the heat is on the app and its owners. “Brands are reluctant with a lot of things right now,” Gagliese says. “There’s the strike against Facebook, Black Lives Matter movement, the pandemic. I think they’re stressed and the last thing they need is to go head-to-head with geopolitical tensions around TikTok.”

What if TikTok is banned?

There are rivals waiting in the wings if TikTok is banned. TikTok is the No. 2 most-downloaded app in the U.S., consistently, Sensor Tower reports. But TikTok will not be without competition, regardless of owner.

Houseparty, too, has started doing more brand deals. It recently worked with Mattel to bring the card game Uno to the app.

Serious competition would likely come from established players including Instagram, YouTube and Snapchat. Instagram, owned by Facebook, is testing a TikTok clone called Reels, and has been reaching out to creators to pay them to make the switch, according to people familiar with the offers.

So if TikTok does end up being banned, ultimately brands will just follow the creators.

Avila, the TikTok creator, says she makes up to $20,000 a month on the app, working with brands like Asus and Dr. Phil. She was worried about the ban, but relieved when the company made assurances over the weekend that it’s not going anywhere. But she has contingency plans if the worst happens. Avila wants to expand to YouTube and Twitch with what she calls educational videos, which perform well on TikTok.

“If TikTok were to ever go away, I’d feel safe on YouTube,” Avila says. “I feel like I would be able to continue growing, but with 8 million followers on TikTok, I have a much bigger voice.”