Seems the Grey Lady Doesn't Quite Get the Whole 'Deals' Thing
READ THIS NEXT
You Can't Stop Instagram Bots by Looking. Brands Have to Stop Buying Them
Kunur Patel
Want to drop $460 on a caviar party? The New York Times thinks you might. In its very own Groupon clone, TimesLimited has also offered up $100 or $260 in flowers for mom, $300 for a seven-course meal and $195 for a cooking class. What a bargain!

Like many of its newspaper brethren, the Times launched its own deals site in March, but as the service gets rolling, one thing is clear: the Grey Lady doesn't get the whole "deals" thing. While Groupon or LivingSocial have grown massive with offers such as $60 for sushi for four or $50 for 10 yoga classes, the Times has its sights set way, way up market. But, as the deals come online, I'm scratching my head if there's actually a market for deals that , well, aren't deals at all. 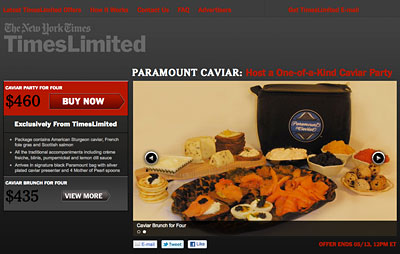 To be fair, the Times never said it'd follow the Groupon formula exactly. Instead of requiring a certain number of people to buy the deal before it goes into effect, TimesLimited offers aren't group deals, they are only limited time and don't need to gain critical mass. Only some are a percentage off -- the flowers are 40% off the normal price tag, while the caviar is just "exclusive." TimesLimited offers do arrive via email like Groupon, but that looks to be where the comparison ends.

"TimesLimited is not being marketed as a 'deals' program," said a Times spokeswoman via email. "The focus is on curated (as opposed to high-volume) offers."

Regardless, it remains to be seen if there are enough caviar fanatics out there to keep this new digital revenue stream afloat. Of the deals mentioned above, none have sold out on the Limited website, except for one Thursday night for the seven-course dinner for two. The Times is not reporting any specific results. "However, I can tell you that we are pleased with the performance of our initial offers and the growing interest shown by advertisers," the spokeswoman said.

But alas, Gilt Groupe with it's new deals arm, Gilt City, has managed to find a market for this stuff. Two thousands-of -dollars offers sold out in record time. Someone spent $10,000 for a set visit and walk-on role in TV show "Entourage" the moment it hit the site. A $30,000 wedding package for Mario Batali restaurant Del Posto sold out too, with 75 members on the wait list.

ABOUT THE AUTHOR
Kunur Patel is digital agency and mobile reporter at Advertising Age. You can follow her on Twitter.