With Star Player Sidelined, Social Media Hashtag Urges Everyone To Be Neymar
READ THIS NEXT
Dispatches from the panicked GDPR frontline 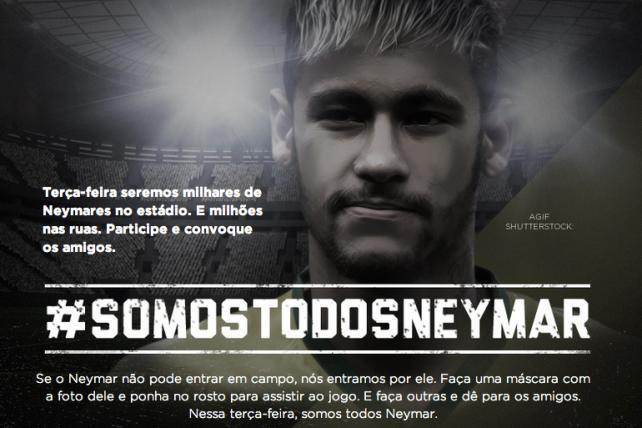 A group of ad agencies have a very Brazilian solution for their country's loss of injured World Cup star Neymar, who was carried off the field on a stretcher last Friday. At Tuesday's semi-final game against tough opponent Germany, everyone can—and should-- be Neymar.

The agencies have printed up 120,000 masks with pictures of Neymar's face for fans to wear during the game. The campaign is being publicized all over Brazilian social media networks using the hashtag #somostodosneymar (We are all Neymar). A website explains "On Tuesday we'll be thousands of Neymars in the stadium and millions on the street. Participate, and bring your friends....If Neymar can't be on the field, we'll go on for him." Fans who won't be in the stadium, which holds about 60,000 fans, can download their own Neymar masks from the site. 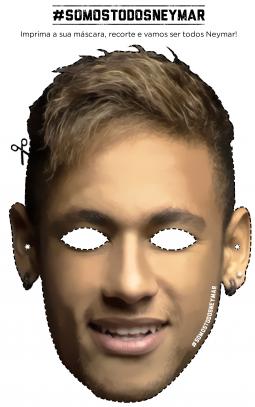 Fans not at the game can download their own Neymar mask

Crazy as their plan may sound, Brazilians truly believe that their support as ardent fans helps their team win. Major marketers like Banco Itau have played up the role of fans in their own World Cup campaigns.

It all started when Lo Braz, who is married to Pereira & O'Dell's Chief Creative Officer PJ Pereira and recently started her own agency, Muse Brands, posted on Facebook that fans should don Neymar masks. Sergio Gordilho, co-president and chief creative officer of Sao Paulo agency Africa, saw the post and conferred with Mr. Pereira (who has changed his social media profile picture to one of Neymar). They brought in Mauricio Magalhaes, of Tudo, a promotions agency owned by Africa and Pereira & O'Dell parent Grupo ABC.

Mr. Gordilho called around to Brazilian printers and found one that could print 60,000 Neymar masks over the weekend, in time for Tuesday's game. Then he called back and doubled the order to 120,000, as more agencies joined in to promote the hashtag and interest grew.

"There's no brand or advertiser behind it," he said. "We said that as Brazilians we have to do something. It's about how we cheer our team. We are all Neymar."

Since World Cup organizer FIFA has very specific rules that wouldn't allow masks of a player to be distributed at the stadium, the masks will be handed out at the airport and along the routes fans will take to get to the stadium in Belo Horizonte, where the game will be played.

Mr. Gordilho said the effort is "very cheap" since everyone did it because they want Brazil to win. Even the printer only charged for the paper. With Brazil doing well so far in the World Cup and dire predictions of violence and mayhem largely unfulfilled, Brazil's hopes had been growing until Neymar fractured a vertebra during Friday's game against Colombia.

"It's going to be difficult," admitted Mr. Gordilho, who has already attended six World Cup games and will be at the final three matches. "Germany thinks without Neymar, it'll be easy [to win]. But when the German team looks at the crowd, all they'll see are Neymars."