Despite High Response Rates, Inability to Reach Scale Led to Orange Acquisition
READ THIS NEXT
Dispatches from the panicked GDPR frontline

LONDON (AdAge.com) -- Hopes that an ad-supported mobile phone could one day become a big business have been dealt a blow with news that Blyk, the highest-profile experiment in that model, was being rolled into the massive telecom Orange. 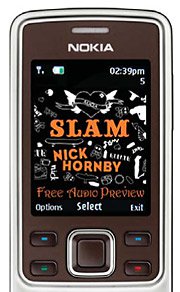 Response rates to the ads have been impressive, with 67% of recipients asking Penguin to send them an audio preview of Nick Hornby's latest book.
The heavily hyped Blyk was created by a pair of Finns and launched in the U.K in 2007. It had a simple proposition -- offering free calls and texts to 16- to 24-year-olds who agreed to receive a certain number of individually targeted of ads per day -- and high hopes. The company anticipated 4.5 million members and planned a European rollout later that same year.

Two years later, the ad-funded mobile network, which never expanded internationally, is becoming part of France Telecom's Orange network in the U.K. Despite successes in luring major advertisers and producing effective campaigns, Blyk never reached its hoped-for scale. It topped out at 200,000 customers in its first year of existence.

Many people in the industry view Blyk as a pioneer; a trailblazer for mobile marketing whose innovations have set the standard for the industry and will continue to play an important part in its evolution.

Blyk ran more than 2,000 campaigns and attracted quality marketers to its service: Coca-Cola, Colgate, Penguin Books, L'Oreal, Lucozade and the BBC all partnered with Blyk to create cutting-edge mobile marketing aimed at an exclusively young audience.

Positive reaction
The response rates to the ads have been impressive, with an average of at least 25%. More than 80% of respondents to a JJB sports campaign opted to receive more messages from the sportswear company. A campaign by the Royal Society for Prevention of Cruelty to Animals inspired 44% of recipients to reply with unprompted emotive messages.

A quiz for L'Oreal achieved a 70% response rate, and 67% of recipients asked Penguin to send them an audio preview of Nick Hornby's latest book. For one client, Blyk sent out a TV spot before it went on air to get audience feedback: 50% of the responses came within three minutes of sending out the message.

"Blyk is a great activation tool because of the response rates," said Scott Seaborn, head of mobile technologies at Ogilvy Group U.K. "We are fast approaching the day when you can spend $1 to make $5 and charge on a cost per acquisition basis. Blyk has helped us to develop small-screen expertise, and creatively they have spearheaded the medium, making good use of video, animated MMS and audio."

But big Blyk's downside -- and its downfall -- was scale. In its first year of business, it attracted 200,000 members, and then got stuck at that number, remaining a niche player. Antti Ohrling, a co-founder of Blyk, admitted, "Advertisers want to see scale but we were not rolling out quick enough."

Mark Angell, business development director at Marvellous Mobile, part of the Isobar network, said, "The intention and the premise were good, but Blyk's problem was its reach and the narrow proposition. It makes more sense as one part of a broader offering than as a standalone business."

Mr. Ohrling said, "If you take our results and then add scale, it becomes mass media. A year ago it became apparent that it didn't make sense to operate as an MVNO [mobile virtual network operator, which means functioning as an independent brand using spare capacity bought from an existing mobile operator], going to each country and rebuilding infrastructure that exists already."

Deals elsewhere
So the decision was taken to pursue partnerships with existing operators. The first of these was with Vodafone in the Netherlands, where, unlike in the U.K., Blyk will remain a consumer-facing brand. As a partner, Blyk will be in charge of recruiting and managing members using the infrastructure and systems of an established mobile network. 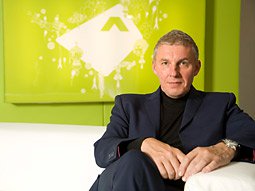 Blyk co-founder Antti Ohrling
There are already advanced negotiations for a deal in Belgium, and the U.S. is also a target, but most of the current expansion plans are focused on Asia, where mobile is the leading format for digital advertising because of the relative scarcity of fixed-line internet connections.

For Orange in the U.K., the Blyk deal (which starts on August 26th) offers the opportunity to become more intimately involved with customers, to find out about their preferences and communicate with them outside of the billing process. Orange will start offering its own ad-funded calls and SMS service in September; it has not revealed details but will be targeting a broader age group than Blyk did.

Mr. Seaborn, who is also co-chair of the Mobile Marketing Association, said, "You'd think Orange would know lots about mobile marketing, but actually they are in the business of connectivity and delivering the infrastructure. There are not many companies [other than Blyk] working heavily with MMS, because it's expensive compared to SMS. But for Orange, MMS carriage is an internal cost, so they can afford to use it more widely."

Mark Overton, VP of wholesale, business development and partnerships at Orange U.K., said, "Orange's ambition [is] to grow its media business in order to offer a portfolio of opportunities for consumers and media houses alike. Blyk has proven that sending timely, interesting and relevant messages to young people from brands builds high levels of engagement and elicits high response and action rates. Orange will continue to offer brands the same direct communication but on a far larger scale."

Mr. Ohrling said, "Our game was never about technology -- it's about creating intimacy and relevancy. Advertiser-supported media have to offer a benefit to users. Earn-out models, where you have to watch an ad before being rewarded, do not provide reliable results. We use relevant advertising and voluntary click through -- that way we are like a good friend and everybody wins."