From Brexit to Brixton, Everything You Need to Know About the U.K.'s Ad Capital
READ THIS NEXT
Dispatches from the panicked GDPR frontline 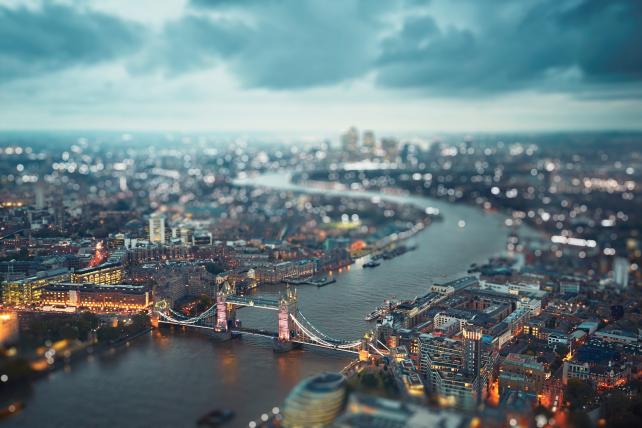 The upcoming nuptials of Prince Harry to the biracial, divorced American actress Meghan Markle is an apt analogy for London: Rooted in tradition, it's anything but traditional.

The city's hip bona fides were born in the swinging '60s, when a youth-driven revolution introduced miniskirts and the Rolling Stones to the world. Today the U.K. capital continues to be a vital cultural force; add to that it being wedged between the American and Asian time zones, and it's no wonder big U.S. tech companies are setting up shop there. Google, Apple and Facebook have all recently invested in statement-making London headquarters, many of them housed in the Kings Cross neighborhood.

It's not hard to convince people to work here: There are more good restaurants than ever, and from trendy Dalston (think Brooklyn) to swanky Mayfair (think Park Avenue), there's a place for everyone. Plus, there's history. Anomaly's office, for example, is situated near one of the Black Death plague pits.

And while the U.K. voted for Brexit, Londoners voted overwhelmingly to stay in the European Union. The city's Muslim mayor, Sadiq Khan, is determined to remain an active player in the global community. Katie Mackay, a partner at Mother London, says Britain threatening to close its doors to non-U.K. workers once it has left the EU has resulted in resumes, cold calls, chocolate and alcohol being sent from Europeans eager to move to London while they still can.

Alain Groenendaal, who moved from New York to London this year when he became president and CEO of Grey Europe, says he finds the city more mixed, and the multiculturalism more layered, than in New York. Look no further than British Vogue for proof: Its December issue—the debut of Vogue's first black, male editor, Edward Enninful—features a parade of multicultural U.K. creative talent, and the British-Ghanaian model and activist Adwoa Aboah on its cover.

But not so diverse in the ad business

This diversity, however, is not that apparent in the ad industry. While many of the city's ad legends started their careers in the mailroom—including Iraqi immigrant Charles Saatchi, founder of Saatchi & Saatchi, and Peter Mead, founder of Abbott Mead Vickers (now part of BBDO)—college graduate recruitment has now become pretty much the only way to get a foot in the door. This has resulted in an entry-level group of mostly white, middle-class employees. Mother London's Mackay is leading initiatives there to up diversity, such as offering entry-level jobs that pay well enough to appeal to applicants who don't have parents able to bankroll them.

London's ad world faces other challenges. Indie agencies could become a thing of the past, as exemplified by the selling off of thriving companies Lucky Generals and 101 to TBWA and MullenLowe, respectively. Laurence Green, a founder of 101 , says it's difficult to be a standalone in this low-growth, low-pricing era, particularly when big regional and global work is harder to come by. The barriers to entry are higher than ever, inflated by the need for access to data analytics. Meanwhile, there's less work for indies from the bigger clients. Over the last year, for example, Procter & Gamble and Unilever have cut their agency rosters in half.

The cause is the root-to-branch disruption triggered by digital technology and the transformation of the supply chain. Media agencies seem to have been hit even harder than ad agencies by the brutal pressure to deliver financial results, which, combined with the scrutiny around transparency, has provoked this exodus of talent. Brexit also hasn't helped, particularly when global network chiefs fail to understand its local impact.

Frampton's resignation to staff said, "Our industry is undergoing tectonic changes and it feels like the time for me to try something different."

Google: 6 Pancras Sq., Kings Cross
Construction begins in 2018 on Google's new U.K. headquarters, which will have room for 7,000 employees. Perks include a roof meadow and butchery lessons.

Street art: 83 Rivington St.
Street art—including some by Banksy—adorn the walls behind the Cargo club.

Apple: Battersea Power Station
The company plans to open its new London headquarters here in 2021. The art deco masterpiece has stood derelict on the banks of the Thames for 33 years.

God's Own Junkyard: 82A Shernhall St.
This little piece of Vegas has neon signs from artist Chris Bracey.

Anomaly: 25 Charterhouse Sq.
Anomaly's state-of-the-art office was formerly part of the Charterhouse buildings, which stands near the site of a Black Death plague pit, where 15,000 bodies are buried.

Ministry of Stories: 159 Hoxton St.
Hoxton Street Monster Supplies' website advertises Banshee Balls and Cubed Earwax for sale, but it's actually a front for the Ministry of Stories, a creative writing and mentoring charity.

WPP: 27 Farm St.
WPP, the world's largest communications group, has its headquarters in a 200-year-old townhouse on a residential street in the posh Mayfair district.

Annabel's: 46 Berkeley Sq.
Just around the corner from WPP is the new $75 million incarnation of Annabel's, said to be the only nightclub the Queen has ever visited.

Growing Underground: 1a Carpenter's Pl.
This World War II bomb shelter has been turned into an urban farm way below the busy streets of South London.

Bowie!: 6 Tunstall Rd., Brixton
Site of a graffiti portrait of David Bowie as Ziggy Stardust, which became a destination after his death.

Ogilvy & Mather: Sea Containers, 18 Upper Ground
After 17 years stranded in Canary Wharf, Southwark was a welcome change for Ogilvy & Mather when it moved there last year.

Unilever: Unilever House, New Bridge Street
Unilever's HQ is on a site acquired by founder Lord Leverhulme in 1920. Post-Brexit, the Anglo-Dutch company has been considering just one HQ, in Rotterdam.

Traitors' Gate: 35 Tower Hill
Many have entered the Tower of London through the Traitors' Gate, never to return.