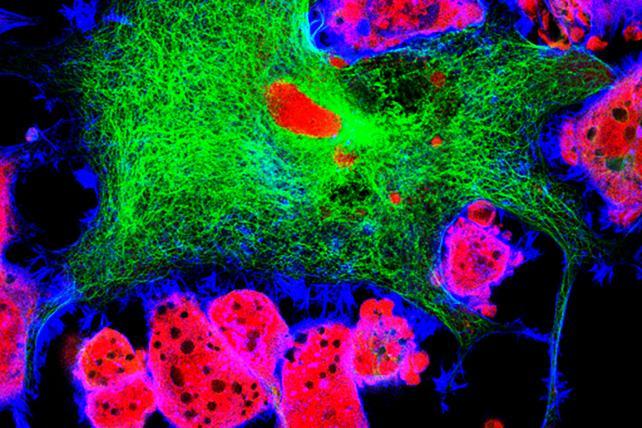 Cancer under the microscope.
Credit: vshivkova/iStock

No one ever accused advertising of curing cancer before. Dentsu is looking to change that.

Since Dentsu Inc.'s venture capital fund launched two years ago, it has funded a few forward-looking startups, from a maker of household robots to a company that makes snack bars from crickets. Now the Japanese ad giant is getting even more ambitious. Unlike other agencies that have invested in making products like beer and candles, or even starting a barbershop, Dentsu is looking to heal people.

Dentsu said Tuesday it invested in Grail Inc., a Menlo Park, California biotech startup that is working on blood tests to try to catch cancer in its early stages. Dentsu Ventures, with an overall fund of $91 million, declined to say how much it had invested in Grail.

Kotaro Sasamoto, the venture fund's managing partner, said it's looking to what Dentsu's business will be in the future, and is interested in big, challenging projects where Dentsu can add value.

Dentsu wants Grail's testing to be available in Japan in the future, and the agency giant could figure out ways to mobilize the public to get tested, for example.

"People have to go to the hospital and provide blood, and you need to incentivize people to go, and that kind of incentivized design could be our expertise," Sasamoto said. Dentsu also could help arrange partnerships with Grail, for example with companies storing data or doing analytics, he said. "Dentsu has been a hub for cross-industry partnerships in Japan, and we could probably leverage our expertise to connect different business partners."

Grail has raised over $900 million in Series B financing. Its goal, according to its website, is to "develop a blood test to detect cancer early, before symptoms appear," and investors include Jeff Bezos, Bill Gates, Johnson & Johnson and genetic sequencing company Illumina.

Dentsu Ventures, which launched in 2015, has invested in companies ranging from Jibo, a "social robot" to be used in a family setting, to VR sports startup LiveLike, to Exo, which makes protein bars out of cricket flour.