Brands From Revlon to Gap and Sony Are Using Technology for Payments, Identity Verification
READ THIS NEXT
Dispatches from the panicked GDPR frontline
Michael Keferl

Japan still has much to teach the world about product innovation and creating experiences for shoppers through their handsets.

There's a lot of global buzz around the coming retail and advertising revolution based on near-field communication, or NFC. Simply put, mobile devices that are NFC-enabled can exchange information at close range, making it possible to make payments or verify customer identities.

In one innovative use of the technology, two Gap stores in Tokyo this month started a "Like with a high-five" Summer T Coordinates campaign in which a customer connects the app to her Facebook account, then gets a bracelet in-store to act as an identifier. When the customer sees a staff member wearing an outfit she likes, she "high-fives" to show approval by touching the bracelet to her smartphone. The phone makes a cheering sound and sends the outfit to her Facebook feed.

The Gap adapted technology used by the Toppan printing company in a recent test with Revlon that involved setting up an NFC-enabled product gallery in Tokyo that allowed customers to use the same bracelet to "like" individual products in the store. 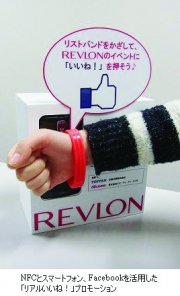 Revlon bracelets allow Facebook 'likes' while customers are still in the store.

In societies that are already reliant on credit cards, the jump to making payments using NFC might not be so difficult. Japan, however, is a cash-based society that certainly needed convincing, and the way NFC and micropayments were rolled out was very different than any other kind of product. Consumers needed to be educated, and that was done through the best way possible in Japan: making people's lives easier.

For Japan's city dwellers, the notion of "convenience" is always welcome, which explains why convenience stores are so prevalent (more than 40,000 nationwide), offering everything from postal services to laundry on top of a massive variety of food, drinks and personal-care items.

When NFC payments launched in Japan, they rode on a wave of convenience for busy Tokyoites. Instead of having to figure out your fare and stand in line for train tickets, it was now possible to use your phone or a rechargeable NFC card to simply "touch and go" through the gates. This simple function completely changed how people travel in the city, and made a positive difference in their lives. More importantly, the technology slowly gained trust and acceptance to make even more possible, starting with micropayments.

There are more than 70 million NFC-enabled devices in Japan, according to Wireless Watch, compared with around 3 million in the U.S.

It began with micropayments in vending machines and train-station kiosks, but this gradual implementation now has people buying everything from McDonald's hamburgers to airline tickets. Recently Skylark family restaurants added NFC payments to 2,600 of its stores nationwide, and nearly every convenience store in the country can accept NFC payments, as well as charge the cards with cash. The Aeon retail group and 7-Eleven convenience stores even have their own brands of cards that include loyalty programs as well. In a very real sense, retailers are becoming banks, and Sony's FeliCa platform makes it possible for independent operators to make their own programs while still remaining (mostly) compatible with each shop's hardware.

The ecosystem is already in place in Japan, which will make for very interesting times as the technology is used for more than purchases. Payments are one thing, but Japan is also a great study in how NFC will change the way brands communicate with their customers, starting with the ubiquitous "point card."

Your average Japanese person likely has a wallet full of paper point cards from every kind of shop imaginable, but we're moving toward a world where all of these loyalty programs can be stored conveniently in a handset. Some retailers like discount chain store Don Quixote already base their loyalty programs on bar codes that can be saved as images in a device, but electronics retailer Yodobashi Camera uses NFC to make it a matter of quick touch, also enabling their customers to manage their points through their devices. Taking existing point schemes, such as media retailer Tsutaya's T-Point program (Japan's largest, at 35 million members), and converting the members to digital points would be much easier in this environment.

For marketing communications, it's a bit trickier. There has to be a benefit to the customer to interact, but we're seeing more and more interesting ways the technology can be used.

Now that it's easier to get mobile data in the subway system, there are more opportunities to connect with a captive audience. Japanese agency Shunkosha rolled out "Strappy," an advertising medium that has chips embedded in subway hand straps. It allowed straphangers to make a quick brand connection with travel agency H.I.S. by bringing them to a mobile website.

At the recent NFC & Smart World trade show, we were given "NFC Quest" game cards connected to our Twitter accounts that let us check in at different booths we visited, earn points and then let our avatars battle it out for prizes at the end. This mixing of NFC with social networks is going to change retail in a lot of ways, because now we'll be able to "like" the things we touch and share them with the world.

ABOUT THE AUTHOR
Michael Keferl is director of CScout Japan, a company focused on marketing and technology trends in Asia. He blogs at japantrends.com; follow him on Twitter at @cscoutjapan.

Michael Keferl
View all articles by this author