You Give Me Fever-Tree: Upstart British Mixer Becomes a Global Brand

Premium Mixer, Growing at 62%, Launches First Advertising Campaign
READ THIS NEXT
Dispatches from the panicked GDPR frontline
Fever-Tree, a young brand of mixers, is beginning its first ad campaign.
Credit:

It's a classic David versus Goliath story: Two entrepreneurs get together to create a soft drinks brand to challenge the mighty Coca-Cola, and ten years later they are selling in 54 countries, growing at 62% annually, turning over $34 million, and the share price is up 210% in the past year.

"David," in this case, is Fever-Tree, a drinks mixer brand set up by Charles Rolls and Tim Warrillow, two well-connected Brits whose business is still based on the Kings Road in Chelsea, a famously upmarket street in London.

Fever-Tree hasn't put Coca-Cola out of business just yet, but its success has shaken up the market and compelled its main rival, Schweppes -- which is owned and marketed by Coca-Cola in the U.K. -- to relaunch its brand and step up new product development this year.

Mr. Rolls (who used to run Plymouth Gin) and Mr. Warrillow (a former ad man) noticed that mass-market Schweppes was the only mixer in town, and decided to create a premium alternative. After two years of research and development, Fever-Tree was launched in the U.K. in 2005, quickly winning shelf space in Harrods, in major supermarkets, and in some of the country's top restaurants.

Growth for the first decade happened by word-of-mouth, PR, and sampling campaigns, often in conjunction with premium gin brands. A decade in, Fever-Tree is ready to step up the marketing, and has just launched its first TV advertising campaign.

Saskia Meyer, Fever-Tree's marketing director, has been with the business for eight years and was the company's second employee. She said, "Our challenge is to reach a broader audience in an engaging way, while encouraging our existing audience to feel an emotional connection with the brand."

The advertising route is pretty direct -- a woman in a bar wears a slinky dress and sings Peggy Lee's song "Fever" while her G&T is made just as she likes it -- but the execution is classy, thanks to acclaimed writer and director, Paul Weiland.

The endline is, "Mix with the best." Ms. Meyer added, "We've felt a powerful connection between our brand and that song for a while, and Paul helped to streamline the process all the way through." 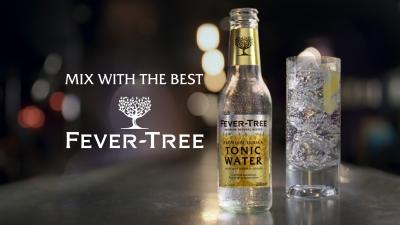 Already, Fever-Tree does 75% of its business outside the U.K. Its biggest seller in the U.S. is ginger beer, helped by the popularity of the Moscow Mule, which pairs the mixer with vodka and lime.

In its home territory, however, Fever-Tree's success has been built on tonic water and has coincided perfectly with the gin revival in Western Europe, particularly the U.K., Spain, Belgium and the Netherlands.

Spain, where Fever-Tree was first introduced through a restaurant with three Michelin stars, is the biggest gin market in Europe, according to Nielsen. The Spanish order from separate "gin-tonic" menus and love to drink it from a "copa de balon" – a large balloon-shaped glass with a stem – a fashion that is spreading across the continent.

The U.K. gin market grew 7.6% by value in the last year, driven by premium gins such as Hendrix and Bombay Sapphire, up 42% and 17.3% respectively (Nielsen).

Nielsen liquor analyst Marc Aston said, "Gin is a category that has benefitted from U.K. consumers wanting to buy 'craft.' We have seen craft beers take off in recent years and brands such as Hendrix fit perfectly into the Craft Gin movement."

Fever-Tree's origins -- the founders visited the Congo, Tanzania, Sicily and Seville in search of ingredients -- give the brand enough artisan credentials to fit in with this movement, but it has also energized the adult soft drinks market in general, with variants like Sicilian Lemonade, as well as helping to make it fashionable to drink mixers without alcohol.

According to Coca-Cola, the adult soft drink market in the U.K. is also strong, and has grown by 9.1% in the past year, outpacing other soft drink categories, including water and energy drinks. Jessica Taylor-Delaney, senior brand activation manager for Schweppes, said in a statement, "Demand is fuelled by a growing health culture, with 35-plus consumers more conscious of calories and looking for inspiring drinks outside of the established youth-focused brands."

Another measure of Fever-Tree's success has been the expansion of the premium mixer market that it invented. Artisan brands like 1724 (named because quinine was discovered at 1724 meters above sea level on the Inca Trail), and Bermondsey Tonic Water have launched recently, while other premium U.K. soft drinks manufacturers like Fentimans and Bottlegreen have now launched rival mixers.

The next move for Fever-Tree, which currently has a portfolio of 12 drinks, looks set to be the launch of ready-mixed drinks. Ms. Meyer said that the company is in talks with gin brands about bringing a full gin and tonic to market, designed to make the brand more accessible to a younger audience.

And upcoming trends? Ms. Meyer says that dark spirits like spiced rum are getting more popular, and predicts ginger beer could become a global big seller for Fever-Tree as a result.