Where's the Growth in Marketing? Follow the BRIC Road 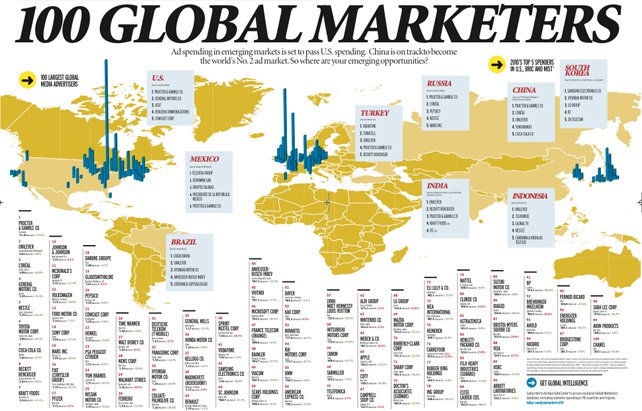 "Emerging markets are the main source of ad-expenditure growth," said Jonathan Barnard, head of forecasting at ZenithOptimedia. "Over the next three years, half of all global growth in ad expenditure will come from just 10 markets: the BRICs, the MISTs, South Africa and Argentina." 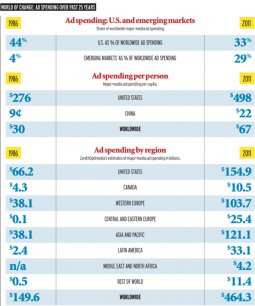 WORLD OF CHANGE: Ad spending over the last 25 years
The 25 largest ad markets this year include 10 emerging ones: BRIC, MIST, South Africa (No. 14) and Thailand (No. 22 ), according to the tally by ZenithOptimedia. Argentina ranked No. 26.

Among the 100 largest global advertisers, 13 companies allocated more than 10% of 2010 measured-media spending to China, according to Ad Age 's Global Marketers report.

One global advertiser stands out in China: Yum Brands, parent of KFC. China accounted for 29% of the fast-food company's measured-media ad spending and 36 % of its worldwide revenue last year.

P&G generated about $5 billion (6% of revenue) from Greater China in the year ended June 2011 and is counting on big growth ahead.

"The average Chinese spends less than $3 a year on Procter & Gamble products," Chairman-CEO Bob McDonald told analysts in August. "But in the United States, the average [person] spends nearly $100. So while we're leading, while we're growing -- we're growing strong double digits (in China) -- we still have work to do."

Meanwhile, P&G's revenue in India and Brazil is growing even faster, with an annual growth rate above 20%.

Avon Products is the Global 100's most BRIC-centric advertiser, putting nearly 40% of 2010 measured-ad spending into those countries.

Spending among the leaders in 2010 was on a growth trajectory -- a shift from 2009, when top-100 worldwide spending tumbled 8.7% amid the global recession.

The roster of Global Marketers has changed notably over the past 25 years. Changes reflect international growth of blue-chip marketers such as L'Oreal, McDonald's Corp. and Walmart Stores; the emergence of newer global players such as South Korea's Hyundai Motor Co., Samsung Electronics Co.and Kia Motors Corp.; the rise of new categories (most significantly wireless phones); and the effects of mergers and divestitures.

But the sea change in the last quarter century is where global advertisers spend their money.

Make no mistake: The U.S. remains the powerhouse of advertising, with spending more than three times that in No. 2 Japan, according to ZenithOptimedia. But the U.S. share of major-media ad spending (TV, print, radio, cinema, outdoor and internet) fell to 33% in 2011 from 44% in 1986.

Per-capita spending in emerging markets remains a fraction of that in the United States. Advertisers spent $498 for every man, woman and child in the U.S. in 2011, according to Ad Age 's analysis of the data. They spent $22 per capita in China -- roughly the U.S. per-capita ad expenditure in 1946. But consider how far China has come: Its per-capita ad spending in 1986 was just 9¢.