The Huffington Post picked a good time to launch in the U.K., when the day's news is saturated with stories condemning the practices of British journalists at Rupert Murdoch's Sunday tabloid, the News of the World. Both Huffington Post's 5-year-old U.S. site and the day-old U.K. version share the same lead story: the ongoing revelations that the News of the World didn't only hack into celebrities' voice-mail boxes years ago, but also tampered with the cellphone messages of a missing teenager. 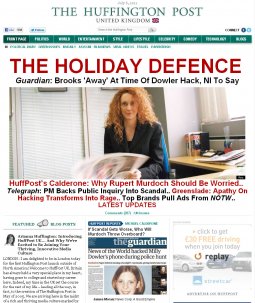 The treatment of the story on the two sites is very different, though. The U.S. site has a huge headline, "Lord of the Rings," across the top of its homepage, with the headline "Murdoch Empire Under Fire as Hacking Scandal Takes Turn After Shocking Turn" and a close-up of Mr. Murdoch's face in profile. The link is to stories on the U.K. site, giving a boost to Huffington Post U.K. on its launch day.

The U.K. site assumes more intimate knowledge on the part of the British reader, highlighting well-known News International executive Rebekah Brooks, who was editor of the News of the World in 2002 when schoolgirl Milly Dowler's voicemail was hacked and her messages deleted, giving false hope to her parents that the dead girl might be alive and checking her voicemail. The U.K. headline is "The Holiday Defence," a reference to stories suggesting Ms. Brooks would claim she was away at the time, and the main picture is of Ms. Brooks.

It's a day when the British public, heartily sick of at least some of the U.K. media, might welcome a new and different news site. And despite the wall-to-wall coverage of the News of the World's phone-hacking scandal, Huffington Post founder Arianna Huffington is attracting plenty of media coverage for her site's first venture outside North America.

The U.K. media landscape is very different from that of the U.S., however, and it will be a challenge to build long-term interest in Huffington Post U.K. Britain has a strong and lively tradition of a progressive media that challenges authority, so Huffington Post's liberal-ish stance will not stand out in the marketplace.

In the U.S., Huffington Post spent five years building its reputation as an independent voice before selling to AOL for $315 million in February, but in the U.K., most people outside media circles hadn't heard of the site until they saw the news stories about the AOL deal.

Consequently, Huffington Post U.K. is viewed as a distinctly AOL company. This view is supported by the number of links on the homepage that take a visitor directly to AOL sites. Huffington Post U.K.'s editor is Carla Buzasi, the editor in chief of AOL Europe, and it draws on local AOL editorial staff as well as recruits from the BBC and Al Jazeera.

All this makes for a less radical proposition than the U.S. version. There are some high-profile U.K. bloggers included in today's launch -- including ex-Prime Minister Tony Blair and comedian Ricky Gervais, best known for his TV show "The Office" -- but these left-of -center voices are balanced by contributions from two Conservative MPs, Culture Secretary Jeremy Hunt and millionaire green campaigner Zac Goldsmith.

Referring to the use of unpaid contributors that has proved controversial in the U.S., Meg Pickard, head of digital engagement for Guardian News & Media, said, "How sustainable is a business model where you don't pay your contributors? It might create a level playing field, but here [in the U.K.] we are more cynical about why a person is saying what they're saying, and why they want exposure."

Ms. Huffington's inaugural post on the U.K. homepage exclaims: "I am excited to be joining your thriving, innovative media culture." She adds that the country has "a very special place in my heart, having gone to college and started my career here."

Despite Ms. Huffington's insistence that the U.K. team is made up entirely of Brits who understand the local culture, comments on her post suggest that the site is too American in style. There are complaints about the alien U.S.-style headlines, where almost every word is capitalized. Other readers don't want a British version at all, and object to being redirected to the U.K. site when they are trying to get to the U.S. version, which already claims 1.2 million U.K.-based readers.

Ms. Pickard said, "We will wait and see if they will be able to make it more than just a 'lite' localization of the U.S. site, or whether they can build a real U.K. media brand."

In addition to a PR push, Huffington Post and ad agency MBA created a launch campaign themed "Blog all about it." Digital advertising sites in major train stations display a live Twitter feed, including tweets from commuters. Print, taxi and online ads carry the same slogan.