Not Just Crazy Hair and Sizzling Dance Moves, the 'Italians of Asia' Have Powerful Appeal
READ THIS NEXT
Dispatches from the panicked GDPR frontline

It might seem like a stretch outside of Asia, but the gimmick doesn't raise eyebrows for those familiar with the Korean Wave. South Korea's stylish entertainment industry, driven by pop music and TV dramas, not only amuses but also serves as a potent and willing vehicle for marketing messages.

Korean girl group Sistar
"For a fan it feels personal," said Mark Russell, author of "Pop Goes Korea: Behind the Revolution in Movies, Music and Internet Culture." "The advertising is not selling out, it's a way to see your celebrity more often.

"It's viewed as more of a symbiotic relationship, where the fans are giving as much as they're taking," he said. "The celebrities really work with the fans in a lot of ways, like making sure there's lots of shower scenes [in TV dramas]. They call that "fan service.'"

Korean entertainment has outsize influence considering it comes from a country of 49 million people that 's about the size of Indiana. Despite language barriers, the celebrities have passionate followings not only across Asia but even in Western countries, thanks to the internet and social media. Korean cultural exports hit a record $4.2 billion last year, the Financial Times reported.

Some acts are trickling into the U.S. mainstream. The nine-member Girls' Generation became the first Korean musical group to perform on David Letterman's show (pictured at right), when they sang an English version of their song "The Boys" in January. And girl group 2NE1 (pronounced "twenny-one") collaborated with Will.i.am on a song being used in an Intel campaign. Seoul-based agency network Cheil Worldwide will host a session at the Cannes Lions International Festival of Creativity next week on digital marketing opportunities through Korean pop music, with 2NE1 as guest stars.

"Korean stars are usually good at using social media to communicate with their fans. They speak about their personal lives (their family, their pets, etc.) and even post their "no-makeup' photos," Kenneth Cho, Cheil's VP overseeing marketing strategies, told Ad Age by email. "Using these social/digital media, K-pop stars become ...very approachable, someone who's very close to me." 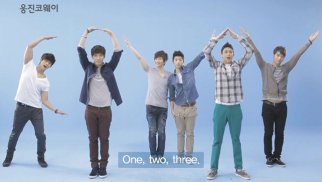 2PM's cover dance for Coway
An example of K-pop digital marketing is boy band 2PM's "cover dance" campaign for Coway water filtration devices. A YouTube video features the group teaching the routine step by step -- "One and two, then you get some water" -- then spelling C-O-W-A-Y in human letters. They also encourage fans to upload their own versions. The product's current target is women ages 30 to 50, but "we wanted to rejuvenate our brand image to a more bright, younger, dynamic image to appeal to the younger generation who may become our customers," CMO Peter Kahng said. The brand's ad agency is Cheil.

Fan submissions came from Indonesian Muslims in headscarves to Mexican teens using their country's flag as a backdrop. Several videos are from Thailand, where Coway plans to launch a marketing campaign this summer and host a fan meeting with a 2PM member who's Thai-American.

"We've not spent any advertising money to promote this [cover-dance campaign.] We just used YouTube and we think it's fantastic that people from Indonesia know about this and even write Coway on the walls to promote our brand," Mr. Kahng said. (Most social-media campaigns, however, do require some promotional investment.)

Unlike in Japanese pop culture, which often features young girls in school uniforms, Korean stars project stronger, more independent personalities. They're not as sexualized as Western celebrities, though long shapely legs seem to be a prerequisite for Korean starlets. The music is club-friendly, and lyrics often include a few words of English for more international appeal.

Korea's entertainment industry began taking off around 2000, as Seoul looked to culture to help lift the country out of Asia's economic crisis, said Eric Cruz, who worked for Wieden & Kennedy in Tokyo and is involved in the region's music and creativity scene.

"Just as Japan started exporting its culture through manga, Hello Kitty and anime, Korea also started looking at its own culture and looking at things it could capitalize on," said Mr. Cruz, now executive creative director at Leo Burnett & Arc Worldwide Malaysia.

One thing that made Korean entertainment, especially TV dramas, stand out in Asia were emotions conveyed openly. Unlike other Asian cultures where subtle forms of expression are the norm, Koreans are known to be passionate and hot-tempered, Mr. Cruz said.

"They're kind of known as the Italians of Asia," Mr. Cruz said. They're one of the more expressive cultures, more explosive in how they express themselves. It's also the way they carry themselves, and they're more into fashion."

Still, the themes of popular Korean TV dramas hew closely to Asia's generally conservative culture. Unmarried adult characters still live with their parents, and there's little violence or sex. Plotlines are aspirational, with the polite, long-suffering girl doing the right thing and triumphing in the end.

Marketers found TV programs to be a strong platform to promote products from cellphones to cosmetics. In "The King 2 Hearts," a South Korean prince eats pink heart-shaped Dunkin' Donuts on dates with his girlfriend, a North Korean Special Forces officer. He tells her that in South Korea, it's normal for couples to eat donuts when they go out.

"Dream High," about teenagers becoming pop stars, was designed from the beginning to be marketing-friendly. Its website has a page listing details of the clothes, shoes and electronics used by the characters.

Pop stars are also frequent brand ambassadors, such as Sandara Park from 2NE1, who promotes, among other things, Nikon cameras. A recent campaign shows Ms. Park and her bandmates horsing around, staging a photo shoot with a hair dryer for a wind machine and using a Nikon Coolpix compact camera. "Our intention was to increase attractiveness as well as purchase decisions," said Dongkook Kim, brand manager of Nikon Korea. The company said that since Ms. Park's campaign debuted, Nikon has grown to a firm No. 2 in the market with a 23% share, trailing only Samsung.

More broadly, Korean entertainment has apparently improved perceptions of "Brand Korea," which not so long ago was associated with shoddy knockoffs. A 2011 poll of foreign consumers conducted by the Korea Trade-Investment Promotion Agency found that if products from the U.S., Japan or Germany are priced at $100, then Korean products are valued at $76.60. That's up from $66.30 in 2006.

Respondents who said they'd experienced Korean culture (such as music or TV) in the past year tended to have a favorable perception of Brand Korea.

Perhaps the most telling indication that the Korean Wave resonates deeply with consumers is the increasing number of foreign tourists, many of them Chinese, going to Korea for plastic surgery to look more like their favorite idols. "Nearly all of them said they want the face of Lee Young-Ae," an Agence France-Presse report cited Seoul plastic surgeon Joo Kwon as saying, referring to a popular Korean actress.