Channeling consumers' frustrations with dieting, Unilever is running a mainstream advertising campaign by Ogilvy in Germany that uses the English tagline "Fuck the Diet."

The company is encouraging consumers to eat as much as they like of its Du Darfst products, claiming that the low-calorie line will help them lose weight without feeling as if they are on a diet. In German, Du Darfst means "you may." 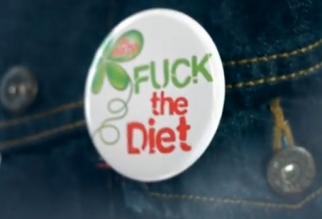 The brand's website is covered in references using the expletive, and even encourages users to download a badge bearing the "Fuck the Diet" slogan. Du Darfst's Facebook page does not spell out the word but more discreetly says "F*** the Diet."

In a TV commercial by WPP Group's Ogilvy Dusseldorf, young, slim, beautiful people tuck into sandwiches and enjoy an active and fun lifestyle. The spot, which airs at all times of day, including mornings and Sunday afternoons, ends with the "Fuck the Diet" tagline and image of a badge that Du Darfst clearly hopes will become its catchphrase.

A spokeswoman for Unilever in Germany said in a statement Tuesday night: "Although the current Du Darfst campaign has become a bit of a talking point in Germany -- as effective marketing should -- it is targeted specifically at German consumers and uses language that we do not believe most German consumers find offensive. This is because the term in the campaign is frequently heard on German TV and radio, and is used in newspapers and magazines, and in the context of 'let it be' it is not censored or seen as inappropriate by most German consumers."

German consumers might disagree. Despite toning down the Facebook language, not everyone is impressed by the campaign. Facebook responses say things such as "Neither clever nor funny. Embarrassing." Kervin Zeller wrote on the Du Darfst wall, "I am deeply shocked! I laugh each time I see the spot simply because I cannot believe it. So sad." Others complain that encouraging dieters to eat as much as they want is just as stupid as the slogan.

The philosophy behind the campaign is spelled out on the brand's site. "No fat, no carbohydrates and no food after 5:00 -- the list of dietary rules is long and frustrating. Stop it! We have developed some great tips with dietician Silke Kayadelen. Try it -- reawaken your passion for food and you'll never look back!"

The Unilever spokeswoman said the campaign is about having a healthy weight through a healthy lifestyle, and draws on research showing that 80% of women see diets as "complicated to implement and maintain."

Unilever supplied this translation for the German TV spot:

"You don't want to count calories? Just let it be.

With Du Darfst you can enjoy food without regret.

Because Du Darfst means "you don't have to."

Just take what you want -- Fuck the diet.