Bailon the Latest to Struggle With Marketing Beyond the Mouse
Adrienne Bailon
Credit: AP

LOS ANGELES (AdAge.com) -- Graduating from the Disney Channel to grown-up star often requires a change of wardrobe, but lately it seems to involve ditching a chastity belt for a straitjacket. 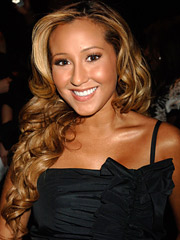 Adrienne Bailon
Credit:
AP
This week, Adrienne Bailon, a lissome blonde who is a third of the Cheetah Girls musical trio, did just that. She claimed that her laptop computer -- complete with embarrassing nudie pics -- was stolen at JFK Airport, and that she was pursuing legal action against the perpetrators who leaked those photos. But it turned out to be a hoax, a sort of contrived attempt to show that she was ready to spread her wings and fly the Disney nest before she is pushed out at the old age of 25.

Starlets keep losing costumes
At first blush, it looked like yet another potentially franchise-killing PR disaster for Disney Channel. In the past two years the Walt Disney Co. property has had to weather the leak of "High School Musical" starlet Vanessa Hudgens' own nude photos, followed by "Hannah Montana" alter ego Miley Cyrus' barely clothed photo shoot with Vanity Fair.

But the Cheetah Girls aren't exactly the freshest faces in Disney's stable at the moment. The first TV movie, based on the young-adult books by Deborah Gregory, debuted way back on Aug. 15, 2003, with millions of viewers worldwide. It would remain Disney Channel's top-rated movie for two more years, until the "Cheetah Girls 2" premiere received a total of more than 8.1 million viewers, making it the highest-rated premiere for a Disney Channel Original Movie at the time.

Given her age, Ms. Bailon is a Disney Channel star with a limited shelf life at the Mouse House: The Channel's demographic is set rigidly at kids 6 through 14, putting Ms. Bailon's Cheetah role on the endangered species list. The latest Cheetah Girls original movie, "One World," aired on the channel this past August, ending with the trio headed off to college -- territory where Disney Channel fears to tread. After their current stadium tour ends and their DVD comes out, both in December, things look bleak: No "Cheetah Girls 4" is in development at Disney Channel, insiders there confirm.

All three Cheetah Girls are now working on solo albums, and Ms. Bailon's exposure is clearly meant to make a clean break with her child-friendly past, albeit to the horror of the parents of the second-graders who worship her.

But in letting her friend and erstwhile publicist Jonathan Jaxson leak the nudes to get her some extra publicity, things may have "backfired," as Mr. Jaxson said in an interview with the Atlanta affiliate of CBS on Wednesday.

Added Mr. Rogow: "Bridging the gap between Disney and adulthood has been a challenge for actors going back to Jodie Foster, and there are good ways to do that. But this one would seem to be not one of the good ones."

Indeed, while Ms. Duff -- who has managed to not only keep her clothes on, but a line of her clothing on the racks of Target -- inked a one-year talent and development deal with NBC yesterday, on the same day Ms. Bailon was offered $100,000 to pose for Playboy.

"Everyone makes their own decisions," says David Weisswasser, managing director at Platinum Rye, a global entertainment consulting firm that specializes in mating celebs with brands. "Was I surprised by it? Yes. But it doesn't necessarily mean it's the wrong decision for her based on where she wants to take her career. She is now a 25-year-old woman."