Why Chelsea Handler Switched From Grey Goose to Belvedere

Q&A: E!'s Acerbic Talk-Show Host on Brand Loyalty, Oscar Specials and the Kardashians' Tweets
READ THIS NEXT
How restaurant chains are duking it out to be the best in their categories

LOS ANGELES (AdAge.com) -- In a recession, consumers of all sorts are abandoning their brand loyalty and trading up or trading down for value-based alternatives to their most-beloved products -- even Chelsea Handler.

The 34-year-old comedian and host of E!'s "Chelsea Lately" has long been a devoted drinker of Grey Goose, her spirit of choice and the inspiration behind many of the stories depicted in her New York Times best-selling memoir "Are You There, Vodka? It's Me, Chelsea." Fans would even present her with ribbon-topped bottles of the French spirit at stand-up shows in lieu of a gift basket or teddy bear. 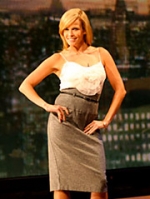 Chelsea Handler
Credit:
E!
But for her upcoming comedy tour, The Chelsea Chelsea Bang Bang Tour (named after her upcoming third book, out March 9 from Grand Central Publishing), the comedian is trading in Grey Goose for Belvedere, the official sponsor of the Live Nation-produced event.

Ms. Handler said her brand switch came down to Belvedere's healthier ingredients and heritage more than a case of sponsors throwing money at a tour.

"I was a Grey Goose girl but I found out Belvedere has no real sugar in it," she told Ad Age of her new vodka preference. "These guys really know what they're talking about. They have a distillery in Poland and that spells serious to me. Plus, if I was going to have someone sponsor me, it would have to be either Belvedere or Kotex. I just like Belvedere better."

That flippant approach to advertisers has helped make Ms. Handler something of an anomaly in the E! family. As the host of "Chelsea Lately" since 2007, she has carved out a unique niche for herself as one of the few females ever to host a late-night talk show, all while on a network known for covering and celebrating celebs such as the Kardashians, Denise Richards and the Playboy playmates of "The Girls Next Door."?

The irony is not lost on Ms. Handler, who makes her fellow E! talent the butt of many of her jokes. "I wanted to make sure from the get-go we weren't taking anything too seriously," she said of her show's early days. "E! is a very embarrassing place to be working so we like to make sure we're constantly making fun of everything."

Yet Ms. Handler's distinctive, raunchy brand of booze-influenced humor has helped her develop a growing following that's made her one of the network's biggest breakout stars and one of the biggest personalities among women 18 to 34, who watch her show more than they do "The Tonight Show," Jimmy Kimmel, Jimmy Fallon, Craig Ferguson or even newly christened late-night champ David Letterman. On average, her show draws 5 million total viewers a week across its nightly 11 p.m. and 12 a.m. airings, a 50% increase from last year, but still less than her male counterparts on broadcast.

Next, the comedian will be going the route of E! co-star Ryan Seacrest with her own production company, Borderline Amazing Productions, which will debut its first non-"Chelsea Lately" series for E! later this spring, "Pretty Wild,"?about a Kardashian-esque trio of Hollywood sisters.

Ad Age caught up with Ms. Handler on the cusp of her upcoming tour to talk about biting the hand that feeds (and pours vodka for) her, her talk show's upcoming Oscar-themed special and why she could never maintain a sponsored Twitter account like Kim Kardashian.

M&V: Many of the jokes you and the comedians on your roundtable make seem to be about your E! costars such as Kim Kardashian, Bruce Jenner and Ryan Seacrest. Is anything off-limits from the powers that be?

Ms. Handler: In the beginning there was a little concern, but mostly with making accusations like Amy Winehouse doing all those drugs. If she could get her faculties together to hire an attorney, we'd have legal battles, but sometimes we just have to be careful with our language. If they give us a lot of warnings, we have to pretend something slipped, or if it's anything really bad we can always clip it out of the show. Sometimes we change the word around artfully -- sorry, I don't think you can use that word, "artfully" -- but we can replace them. But we can say no to stuff these days. E! has a lot of amazing ideas we shoot down all the time.

M&V: Now that the show has found its following, it seems like your caliber of guests has increased a lot, with folks like Jennifer Aniston and Jim Carrey stopping by, compared to the Z-list reality celebrities who first populated your couch. When did that change start taking place?

Ms. Handler: The bottom line is people love reality shows, they love all the drama. And through making fun of all the celebrities that everybody's making fun of anyway, the big people enjoy hearing about it. They love that you're saying something different from what everyone else is saying. ... So I think they appreciate that and a lot of them come on the show because of that.

We're doing a one-hour special for awards season with Robin Wright, Sandra Bullock and Demi Moore. It's a different flavor. I'll be doing the same kind of interviews I do on the show, but with less levity.? I'm trying to lay the groundwork for doing other stuff in the future ["Chelsea Lately" is under contract with E! through 2012] and not being so stupid all the time. I mean, I'm going to be 35 this year.

M&V: So is this your version of the Barbra Walters special?

Ms. Handler: Yeah, but she's in the sunset of her life. This is my version of her if she had slept with more than one black guy.

M&V: That seems as appropriate of a segue as any to ask about your next book, "Chelsea Chelsea Bang Bang," and its accompanying tour. What kind of subject matter do you tackle?

Ms. Handler: Well, there's no black guys in this book. But it started out as a 22-date tour, apparently sold out a bunch of tickets and venues, so we added two more dates in Radio City and 10 more shows. It's more work than I anticipated but I? figured I might as well do it while I'm out there. The book is about where I am in my life now -- more of the same. All my books are about stories from my childhood, my dating life -- Ted [Harbert, her reported ex-boyfriend and CEO of Comcast Entertainment] is in there -- and about my dad, who my sister just called and said she just found out his cleaning lady was in his bedroom. So he gives me a lot of good material.

M&V: So you've switched from Grey Goose to Belvedere because you liked the natural ingredients and their overall brand story. Any other criteria for brands who may want to develop a relationship with you?

Ms. Handler: It has to be somebody I'm passionate about. I don't want to be one of those celebrities endorsing something to make money. If it's something that's funny or has relevance to my life, I'll do it, but I'm not trying to Kardashian my way through life.

M&V: So what do you make of Kim Kardashian's sponsored tweets and alleged endorsement of the "cookie diet?"

Ms. Handler: I guess they're smart making all the money they can right away. But that's a lot of twittering to do. Her fingers must be exhausted. I don't think I could keep up with all that anyway.