Universal, Sony, Others Wrestle With How Social Media Affects Box Office
READ THIS NEXT
How restaurant chains are duking it out to be the best in their categories

NEW YORK (AdAge.com) -- Can the so-called Twitter effect boost a movie's box-office performance faster than any traditional form of word-of-mouth? Not yet, say many top movie marketers and researchers, but the social networking platform's impact on a studio's media mix and campaign management has already taken shape.

Witness Sony Pictures, one of the first studios to create branded Twitter pages for its films, which saw releases such as "District 9," "Julie & Julia" and "The Ugly Truth" open strong and maintain momentum by keeping the branded conversation around each film active and updating the films' followers on the microblogging site with exclusive content in the following weeks. The results? Grosses of $113 million, $90 million and $88 million, respectively, and counting.

But the idea behind a Twitter effect gained traction this summer after the Hollywood press and the blogosphere blamed Twitterers for shortening the box-office life of films such as Universal's "Bruno," which opened to a strong $30 million but quickly sputtered to a $12 million second weekend based on poor word-of-mouth and a high volume of negative tweets. Could moviegoers with nothing but a cellphone and a Twitter account really be undermining the millions of dollars poured into a movie's marketing?

Market research firm 360i recently tested the Twitter effect by comparing Twitter traffic for "Bruno" during its first weekend at the box office with three other summer films, and found "Bruno" to have the highest percentage of drop-off in second-day box-office grosses (-39%) and negative tweets (21%).

But making a direct correlation between the two is far from scientific and hardly one-size-fits-all for all films, said Sarah Hofstetter, 360i's senior VP-emerging media and client strategy. "A movie like 'Bruno' is exceptionally polarizing -- either everyone wants to see Sacha Baron Cohen naked or they don't," she said. "You have to differentiate in the content and context of a film -- if you give too much credence to Twitter marketing and you say, 'Our efforts contributed to a 10% lift in ticket sales,' no one's going to agree on what caused that."

Little impact
And Twitter, as well as other social media, has yet to directly affect the methodology behind the metrics supplied by box-office forecasters to the studios to gauge all-important first-weekend ticket sales weeks in advance. One major movie forecaster said active Twitter and Facebook users have yet to be included in the sample size because it "needs to be reflective of how the studios spend their money. To chase Twitter or social networks would be a disservice to that population."

In fact, Twitter has helped forecasters such as Marketcast and Nielsen NRG steadfastly hold on to their role in manufacturing hype around those all-important first three days. In the case of "Bruno," analysts correctly predicted the $30 million opening weekend, but stayed away from managing post-debut expectations. "Our job stops after opening day. The rest is up to the universe," said one forecaster.

Nor has Twitter had a measurable impact on studios' marketing budgets, even as they add dedicated staffers to manage and measure social-networking activity around their slates. "While Twitter is important as social media, it is a very small sliver of our marketing campaign," said a Sony executive. "I think it is more effective as a gauge of how effectively your materials are working and it allows marketers to take a real-time pulse on consumer attitudes towards your brand or property."

Instead, Twitter has become the campaign-management tool of choice, one that studios and other marketers can harness faster and to a greater extent as more case studies crop up on a weekly basis. "The name of the game for the studios is to take full advantage of all early signals," said Pete Blackshaw, exec VP-Nielsen Online's digital strategic services. "The downside for them is a movie can be damaged really quickly -- the flow of information on these platforms, and degree to which influencers are tapping into those signals is quite profound."

But one former marketer at a major studio suggested that Sony has harnessed Twitter more effectively for a $30 million movie such as "District 9" than other surprise blockbusters such as Warner Bros.' "The Hangover" or Disney's "The Proposal."

"Sony did a very good job at continuing engagement with consumers. The film got such positive buzz from consumers that they started talking about it through [Sony's] real-time stream," the executive said. "I don't think those other studios knew what they had on their hands at the time." 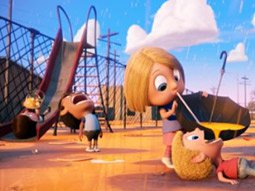 EARLY HIT: 'Cloudy With a Chance of Meatballs'
The studio is taking big bets on summer-level success with a slate that got off to a strong start with the 3-D animated "Meatballs" ($60 million grossed in its first two weekends) and is off to more ambitious heights with the Roland Emmerich apocalypse flick "2012" and the highly anticipated Michael Jackson concert film "This Is It," each slated for the coming months. Even last weekend's "Zombieland" was expected to top the box office with a $25 million haul, which, leading up to the Oct. 28 release of "This Is It" could give Sony a No. 1 film for at least four of the season's first seven weeks.

"They're positioned really perfectly," said Paul Dergarabedian, president of box office at Hollywood.com. "The other studios have some good stuff going on, but it's not like in past years where we had a 'Lord of the Rings' movie or a 'Harry Potter' to dominate the season."

"It's really anyone's game, and the momentum they're going to glean from 'This Is It' is really going to help them," added a former marketing chief for a rival studio.

The concert film has already sold out more than 200 showings based on advanced ticket sales on Fandango.com, breaking the site's records for highest-ever Sunday sales. Although scheduled for a limited two-week release, the film could be extended much in the way Disney's "Hannah Montana" concert film was in 2008 should ticket sales soar. "If the demand's there they'll keep it out there," said the former marketing chief.

"2012" is also poised to be a summer-sized blockbuster when it opens Nov. 13, preceded by what was believed to be the largest-ever simultaneous media roadblock on Oct. 1, with two minutes of new footage from the film airing on 92 TV networks, reaching 90% of TV households and an estimated 110 million viewers.

"If you look a couple years back to 'I Am Legend,' there will always be a place for a movie like that in the fall," Mr. Dergarabedian said.

And while boutique arm Sony Pictures Classics rolls out Oscar bait in November and December ("An Education," Pedro Almodovar's "Broken Embraces"), the main branch seems to have gotten its Academy-courting out of the way in the summer with Meryl Streep in "Julie & Julia" and the critically praised "District 9." Instead, it's prepping popcorn fare such as the action flick "Armored" and the romantic comedy "Did You Hear About the Morgans?" for the final weeks of the year. "It's not about chasing Oscar, it's about chasing the audience," said Mr. Dergarabedian.