With Some Creative Word-of-Mouth Ideas, 'Knight and Day' Could Have Disproven Cynical Narratives
READ THIS NEXT
How restaurant chains are duking it out to be the best in their categories
In case you didn't notice, "Knight and Day," the new romantic action comedy starring Tom Cruise and Cameron Diaz, did not have a great opening weekend. It grossed just over $20 million and came in third place behind "Toy Story 3" (which, along with many others this year, reappeared in the top slot) and "Grown Ups," the Adam Sandler and gang comedy.

It's not as if this was surprising, though. Tracking had been weak prior to release, signaling that there was little interest in seeing Mr. Cruise and Ms. Diaz engage in wacky capers around the globe, with Mr. Cruise acting unhinged and more than a little insane while Diaz reacted hysterically to the events around her.

So what happened? Let's examine some theories: 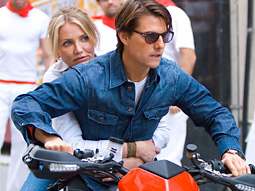 'Knight and Day' only grossed just over $20 million opening weekend.

I'd be surprised if there weren't at least some portion of pontificating pundits who chalk this up as another example of one of 2010's emerging Hollywood memes, namely the "movie stars don't work" idea. These are two of Hollywood's biggest stars we're talking about here, after all, and so success with both of them should have been as automatic as Steve Kerr at the three-point line.

The failure of "Knight and Day" might also be pegged to another contender for this year's story hook, "The audience only wants sequels/franchises/reboots." This is one of this summer's only original properties, even if you can see aspects of a half dozen other movies in the plot outline. So this idea might have some validity, especially since, sans everything else, star power itself should have acted as the brand the audience latched onto for familiarity.

There's also the much simpler explanation that the campaign was a bit disjointed, without a poster or outdoor ads that featured the movie's two big stars -- something Fox's co-president of marketing Tony Sella said was an intentional tactic to set this film apart from the pack -- and a series of trailers that didn't quite know whether to sell it as a romantic adventure or an adventurous romance.

Whatever the larger reason, there were things that the campaign did well (saturating TV with ads) and things that it didn't (the aforementioned lack of movie-star faces on posters), as is the case with most movies. But with as much warning that vast swaths of the moviegoers simply weren't aware or interested in the movie, it seems that there would have been plenty of time to engage in an inspired word-of-mouth marketing campaign that could have turned the ship around.

Now Fox did indeed try to get word-of-mouth going for the movie, mostly in the form of advance screenings about a week before release. That's a tactic that's been used over and over again to try and get audiences excited. It didn't work in this case, though, so maybe it's time for the industry to start trying new things.

Why not try something unexpected: Let some people watch the movie -- or at least a significant chunk of it -- at home. Work with a VOD provider so that random customers can watch a severely extended preview. Or set up in-home viewing parties that are movie-themed for those previews. Cater the party and give everyone a 2-for-1 coupon to see the movie at theaters.

Provide incentives: If people came out of those advance screenings having enjoyed the movie, what mechanisms were in place to help them spread that message either online or off? A dozen business-card-sized handouts or an encouragement to share their feedback on the movie's Facebook page are just a couple of examples. Both need, though, to provide rewards of some sort for those behaviors that encourage people to take them.

If you're going to engage in tactics that are designed to get people talking, it only makes sense, especially taking social networks into consideration, that there be programmatic elements in place to help move that word-of-mouth along. Hollywood could have used a hit from this movie to disprove some of the theories being bandied about, but unfortunately this didn't come through.