How to Get a Brand on NBC's 'Today' for Nothing

Instead of Spending Tens of Thousands on a 30-second Ad, Just Stand Outside With a Sign
READ THIS NEXT
Watch Elon Musk’s awkward ‘SNL’ promos—plus, why his hosting stint is so controversial

NEW YORK (AdAge.com) -- Most marketers looking to get their messages out by using NBC's popular morning-news program, "Today," figure they'll need to spend tens of thousands of dollars for a 30-second spot. And yet Taylor Larouche and her pals were able to snag much more time than that -- for free. 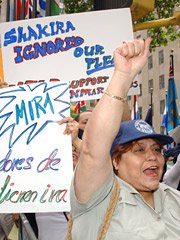 Unpaid placement: Rather than buying spots, many just hold up signs.

Ms. Larouche, a 20-year-old Penn State student, and a "street team" of other college students lined the plaza in Manhattan's Rockefeller Center at 5:15 a.m. on a cold Monday morning in mid-January. Their intent was to hold signs during the broadcast of "Today" calling attention to thon.org, a website devoted to raising money to thwart childhood cancer. But they got a lucky break. At about 8 a.m., no less than host Meredith Vieira approached the group, talked to them and took note of their sign -- all with the cameras rolling. "We made our signs real glittery and big, and we just really wanted to get our message across," said Ms. Larouche.

The college students discovered what some savvy marketers with limited ad budgets already know. In this age of branded entertainment and sponsored integrations, NBC is inadvertently giving away tens of thousands of dollars in commercial time on its flagship morning program.

A 30-second ad on "Today" is worth between $50,000 and $60,000, according to media buyers, and a sponsor is likely to reach what Nielsen Media Research said is an average live-plus-same-day audience of more than 4.96 million in the first 15 minutes of the 8 a.m. hour.

Public-relations pros have long known that if you send out someone in a costume, or plant an appealing enough spokesperson in Rockefeller Plaza at the break of dawn, you might snag some precious screen time when the "Today" anchors go out to do a meet and greet. But now, so does everyone else. "We had figured we'd get on the 'Today' show because we knew the viewership, the audience is so strong, and lots of people watch that segment when they go outside," Ms. Larouche said.

Executives at "Today" don't seem to be fretting over lost ad revenue. While Ms. Larouche's group had to pass through metal detectors, crew members on the scene were only interested in whether their "glittery signs" were appropriate for broadcast on TV and were legible, she said. "We always welcome all fans and visitors to the 'Today' show to stand outside on Rockefeller Plaza with or without signs," said Megan Kopf, a "Today" spokeswoman, in an e-mail statement. She declined to make executives from the program available for comment. "We only remove people from the Plaza if they are posing a security threat or if their signs have profanity, which is very rare," she added. "Most visitors to the Plaza come to see the show and meet our anchors."

Ironically, these may be just the sorts of advertisers NBC Universal would like to monetize in the days ahead. On Thursday, the General Electric media concern and Google launched an effort that lets the search-advertising giant serve as a broker for a limited amount of ad inventory on NBC digital-cable outlets Sleuth and Chiller. The Google program is expected to roll out to CNBC, MSNBC, Sci Fi and Oxygen. When the venture was announced in September, NBC executives indicated they hoped to reach out to smaller and local advertisers who weren't traditional buyers of national TV time.

People, presumably, like Linny Boyette. On Jan. 28, a man in sunglasses and a hooded parka was spotted holding aloft a huge umbrella covered with the logo for 1-800-LAWYERS, a direct line to attorneys in different regions of the country. Representatives of the company did not respond to a call seeking comment. But Mr. Boyette, a stalwart "Today" attendee, said he was not paid to hold the umbrella. 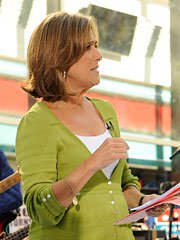 'Today': Stand behind host, get exposure.

Mr. Boyette also often sets up a banner featuring the number "1-800-LAW-CASH" behind the "Today" hosts as they start their 8 a.m. banter. The sign also calls attention to a blog associated with a radio show moderated by host Brian Smith on WICC in Bridgeport, Conn. "It helps," Mr. Smith said, because it reminds former listeners who have moved out of his area about where to find him.

The banner appears because Irving Pinsky, a New Haven, Conn., attorney, arranges for it to be there through Mr. Boyette. "The outdoor part of the 'Today' show is like a block party in New York City," said Mr. Pinsky, who added that he tries to help friends by placing the sign.

At 1-800-LAW-CASH, based in Brooklyn, N.Y., the company is puzzled by the ad. "This is something that we don't pay for and have no connection to," said Rich Palma, the company's chief operating officer. Still, it's clear that the appearance of a random sign on "Today" can generate results. "We get calls all the time: 'How did you get that space?'" Mr. Palma said.