Nothing but net: YouTube TV dials in NBA Finals sponsorship 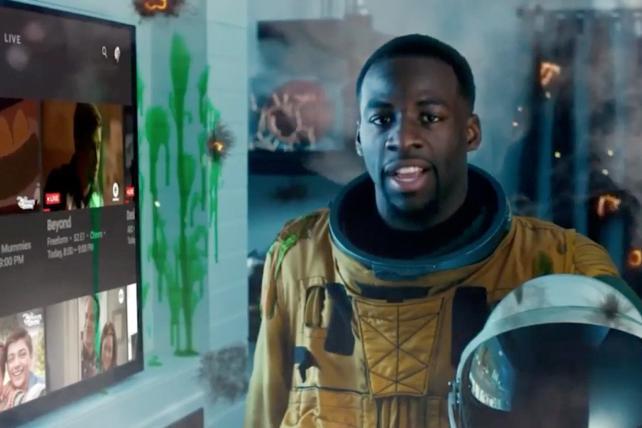 The National Basketball Association this afternoon will announce it has lined up the first presenting partner of the spring NBA Finals, inking YouTube TV to a multiyear deal. It includes in-game commercial spots, call-outs and the YouTube logo on the court and throughout participating arenas.

This marks the second high-end sports championship YouTube TV has aligned itself with, coming on the heels of its presenting sponsorship of the 2017 World Series. Now available in 94 markets, including each of the top 50 DMAs, YouTube TV reportedly has notched north of 300,000 subscribers since it first launched a year ago.

In hitching its wagon to the NBA Finals, YouTube TV is all but guaranteed to reach some of the year's biggest, most engaged live audiences. According to Nielsen live-plus-same-day data, the deciding Game 5 of the 2017 Warriors-Cavs series on ABC averaged 24.5 million viewers and a 13.5 household rating, making it the year's 23rd most-watched and highest-rated TV broadcast.

In retrospect, YouTube TV may have indicated that it had its eye on the NBA championship series when it dropped a new promo starring Golden State power forward Draymond Green during ABC's coverage of the Jan. 27 Celtics-Warriors game. Developed by ESPN CreativeWorks, the swashbuckling spot is exclusive to ESPN and its broadcast sibling, airing only during the networks' live NBA coverage and "SportsCenter." Given that ABC has carried the NBA Finals since 2003 and Green's Warriors are 5/7 favorites to win their third title in four years, YouTube probably couldn't have picked two better-positioned partners to help it hype up its virtual MVPD.

Since the year began, 57 percent of YouTube's TV ad impressions have been generated by its in-game NBA buys. According to iSpot.tv estimates, 98 percent of the skinny bundle's 2018 ads have aired in live sports or shoulder programming, a category that includes "SportsCenter" and various pre- and post-game shows.

The NBA characterized the YouTube TV pact as another milestone in an alliance that began back in 2005. And while pro hoops already boasts the youngest fan base of any major sport, the league is "never one to rest on [its] laurels," says NBA Senior VP, Global Media and Business Development Dan Rossomondo. "Even while we're the youngest-skewing league, we're always looking for ways to innovate how we broadcast our games."

The NBA Finals tip off on ABC on Thursday, May 31. In the interest of not cannibalizing ABC's commercial impressions, subscribers who tune into the championship series via YouTube TV will be exposed to the same ad load that runs in the national broadcast feed. How the two hourly minutes of local ad time shake out remains to be seen; since tipping off in April 2017, YouTube TV has yet to wrestle that inventory from the cable and satellite operators. ESPN, which brokers ABC's sports sales (and books billions of dollars each year in carriage fees) did not comment on the matter.

While the financial underpinnings of the NBA Finals deal were not disclosed, the agreement in some ways resembles the deal YouTube TV hashed out in early October with Major League Baseball. Under that particular arrangement, Google's skinny bundle agreed to air a number of promotional spots throughout Fox's coverage of the 2017 Fall Classic.

According to iSpot.tv data, Fox ran three YouTube TV spots during the course of the seven-game series, for a grand total of 17 airings. Thirteen of the units purchased by YouTube were devoted to a 30-second spot featuring a pair of shortstops (the Astros' Carlos Correa and the Dodgers' Corey Seager) celebrating dingers they'd hit earlier in the playoffs. YouTube also ran a two-minute live spot that aired on Oct. 24, just before the first pitch of Game 1, and invested in five-second interstitials that aired in the run-up to Games 4 and 5, during Fox's national college football and NFL coverage.

"Partnering with the NBA is a slam dunk for YouTube TV members," says Angela Courtin, global head of YouTube TV & Originals Marketing. "We are excited to bring to life our cable-free live TV service during one of the most watched sports events of the year."

Last month, YouTube TV announced it was bolstering its suite of sports content with the addition of NBA TV and MLB Network, bringing the total number of networks it currently offers to 60.