A TV Show to Love, About Finding Love on TV | Ad Age
Skip to main content

A TV Show to Love, About Finding Love on TV

"Lost" has bid a final farewell, leaving a trail of undercooked allegories in its wake. "Glee" now feels the need to include three teachable moments ("tolerance is cool!") per episode. David Simon has barred everyone but Anne Rice and Drew Brees from watching "Treme," because viewers just can't love New Orleans as much and as hard as his supremely annoying characters do. "Justified" and "Breaking Bad" are nearing the end of their seasonal runs; "Mad Men" isn't due back until late July. So what's left to fill this gaping void in our lives, the one we've tried unsuccessfully in the past to fill with family and/or handheld electronic devices? 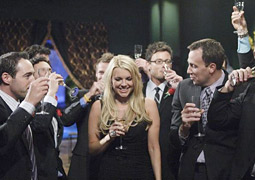 I'd never seen an episode of "The Bachelor" or "The Bachelorette" before Monday. This has nothing to do with some misplaced sense of intellectual superiority or an objection to tele-dating derbies on moral grounds or my male-type plumbing, so much as with an unabashed fondness for even train-wreckier fare. By the time I'd awakened to the existence of these two ABC mainstays, the airwaves had been flooded with dating pageants that doubled as cries for help. Given the choice between well-mannered couples silhouetted by the late-afternoon sun or tequila-rank strumpets wallpapered with do-it-yourself tattoos, I watched the blowsy tarts, even if it meant having to give my TV set the occasional tetanus booster.

In recent months, however, "The Bachelor" and "The Bachelorette" have become impossible to duck, thanks to a wave of tabloid fascination. For a solid six-week stretch, headlines about Jake (apparently a cad) and Vienna (apparently a bitch on wheels) blared at me from supermarket checkout counter and periodontist waiting-room table alike. Against my better instincts, I started to wonder who these people were and how they'd managed to displace the Kardashian gals. At that moment, I vowed to watch the next installation of "The Bachelorette," if only to plug back into the pop-cultural conversation. I suffer for my art.

It took a lot of homework to catch up. I learned that this season's up-for-grabs gal, Ali Fedotowsky, had made it to the final four in the last "Bachelor" tournament. However, her heartless employer forced her to choose between her job and the possibility of true, eternal love. Practical gal that she is, Ali left the show. Hey, when a once-in-a-lifetime account manager gig comes knocking, you answer that door, man. You answer that door.

She realizes now that she was wrong, that marketers are less inclined to send her free cartons of lip gloss when she's otherwise selling ads on behalf of Facebook. And so Ali has returned, chastened and wise, knowing that sometimes "you have to go through the fire to get to the happily ever after."

I like her. She seems genuine enough and boasts myriad attractive qualities, like "nicely shaped shoulders" and "good at soccer." She loves the color yellow; when she emerges from the limo at the start of the season, you half-expect her to be accompanied by chirping animated bluebirds. Ali also gets right to the point, speaking in simple declarative sentences ("I love hugs!") and describing most of what she encounters as "awesome." Her next metaphor will be her first.

As for the 25 suitors, they have well-aligned teeth and count among their interests everything from fitness and nutrition to exercise and push-ups. Sure, they bluster and bark and appear to have learned everything they know about lady-charmin' from Zales commercials, but they're here for the right reasons.

We know this because they say "I'm here for the right reasons" multiple times per episode. In the season's second hour, in fact, they were asked to identify which of their fellow contestants weren't "here for the right reasons." For the uninitiated: A "right" reason is "to fall in love with Ali and serve as a snarling guard-dog for her heart, reawakening her to the glory of mutually respectful romantic attachment," while a "wrong" reason is "to drum up financing for a chain of 24-hour fitness chains." Either way, Ali seems impressed: "They're interesting and smart and driven and ... have AMAZING bodies."

Looking ahead, "The Bachelorette" promises much drama over the course of its summer-long arc, including but not limited to the discovery that one of the male contestants has a girlfriend, a possible stalker incident/suicide attempt involving vehicles with sirens and flashing lights, and an appearance by Barenaked Ladies (shudder). The preview montage teases glamorous field trips to Iceland, Portugal, Turkey and New York City -- this, I suspect, is when the product-placement spigot shall burst open -- and enough tears to fill a Jacuzzi.

It's so on. I'm so in. If, like first-round eliminatee Kyle, you "need someone to go ice-fishing with," that someone oughta be "The Bachelorette."