What is, 'We're tired of being in last place, Alex?'
READ THIS NEXT
A roster of celebs stump for the Vegas Strip’s newest hotel in its first-ever campaign 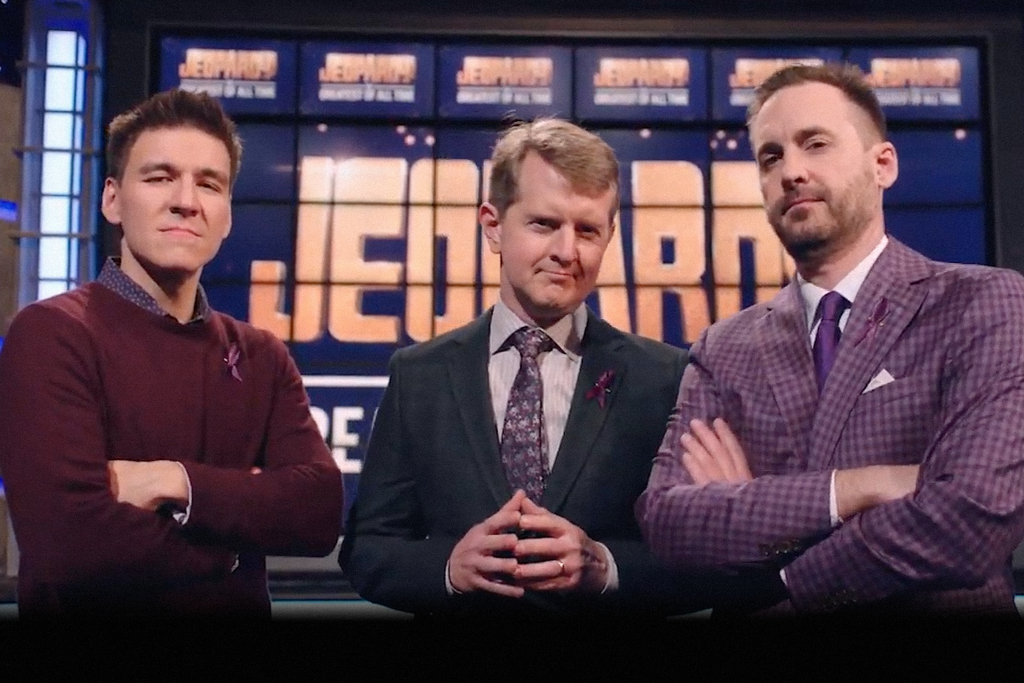 The primetime tournament should give host network ABC a much-needed boost in the Nielsen ratings.

A first-of-its-kind primetime “Jeopardy!” tournament will not only crown the venerable game show’s greatest contestant, but should give host network ABC a much-needed boost in the Nielsen ratings.

Beginning tonight at 8 p.m. EST and proceeding through Thursday at the very least (more on that in a bit), “Jeopardy! The Greatest of All Time” will convene the three biggest brains—and highest money winners—in the show’s 55-year history.

Ken Jennings, who in 2004 put together a skull-clutching 74-game, $2.5 million winning streak, will square off against Brad Rutter, who over the years has amassed a record $4.88 million in “Jeopardy!” lucre, and James Holzhauer, the affable Vegas sports bettor who last spring dragged the show back into the national water-cooler conversation with his 32-game tear, which paid out $2.46 million.

Holzhauer’s reign was mesmerizing, and “Jeopardy!” began generating massive ratings as he continued to clear the boards. When Holzhauer’s streak came to an end on June 3, the syndicated program averaged 14.5 million viewers and a 9.2 rating, making it the most-watched installment of “Jeopardy!” since Nov. 30, 2004. As it happens, that was the day Jennings’ own remarkable run ended; per Nielsen, that episode averaged 18 million viewers.

Holzhauer’s dominance has had a significant impact on the “Jeopardy!” ratings long after he bowed out to Philadelphian Emma Boettcher last June. The show currently averages around 9 million viewers per episode, which makes it a bigger draw than nearly all of the 80 primetime shows currently airing on broadcast TV. (Only NFL coverage and the CBS mainstays “60 Minutes” and “NCIS” put up higher live-same-day deliveries.)

While Jennings’ and Holzhauer’s individual performances helped move the ratings needle for “Jeopardy!” during their respective eras, Rutter is a bit of a wild card. The 41-year-old is a master of the show’s tournament format, appearing in and winning every event from The Tournament of Champions, Ultimate Tournament of Champions, Million Dollar Masters and Battle of Decades. But because he hasn’t had the sort of sustained runs enjoyed by his rivals, Rutter hasn’t had the sort of day-in/day-out visibility and consistency that makes for a viral contestant.

That said, Rutter is the favorite to win the GOAT tourney. In fact, even if he doesn’t walk away with the $1 million grand prize, his cash lead over Jennings and Holzhauer is sufficiently roomy so that neither contestant could possibly catch up to him—at least not this time around.

Rutter can add to his pile of “Jeopardy!” bucks in just three days if he runs the table. A best-of-seven series, the GOAT tourney will run tonight through Thursday on ABC, with dates to be added as needed. Should a fourth night be required, that round will air on Tuesday, Jan. 14. A real dogfight will extend the action into the next night and the next after that, with Friday, Jan. 17 designated as the seventh and final round should all three players remain deadlocked.

The GOAT event marks the first time in 30 years that “Jeopardy!” will air on network prime. Produced by Sony Pictures Television and distributed by CBS, the first-run syndicated program airs in 208 of the nation’s 210 local TV markets. ABC affiliates account for 42 percent of “Jeopardy!” households, but the show also appears on local NBC (25 percent), CBS (22 percent) and Fox (6 percent) stations, as well as a handful of independents.

ABC is in dire need of all the ratings traffic “Jeopardy!” fans will bring with them in the coming nights. Currently ranked last among the Big Four with a 0.8 live-same-day demo rating, ABC has managed to deliver a 1.0 or better in the dollar demo on just 14 of the first 105 nights of the 2019-20 TV season. Seven of those nights were boosted by the ESPN-produced “Saturday Night Football,” while specials (“The Little Mermaid Live!,” the CMA Awards, American Music Awards,“New Year’s Rockin’ Eve”) and a Christmas NBA game accounted for five of the other higher-rated primetime blocks.