It's an Adidas-vs.-Adidas World Cup Final, With Nike Teams Vanquished 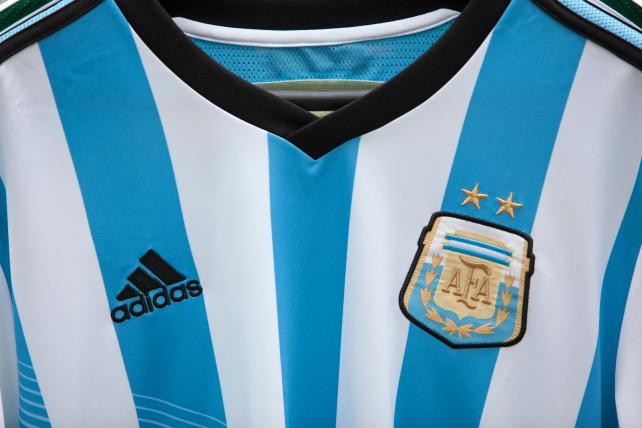 Argentina's World Cup victory over the Netherlands put the South American team one step away from soccer's ultimate prize. But for Adidas, the championship has already been won.

Argentina, which is sponsored by Adidas, triumphed on penalty kicks in Sao Paulo to eliminate a Dutch team outfitted by Nike. And in the final, Agentina will face fellow Adidas-backed team Germany, which defeated Nike-supported Brazil 7-1 on July 8.

Adidas also outfitted the Spanish team that won the last World Cup in 2010.

The prestige of outfitting the victor counts in a closely contested market that has the two adversaries seeking any edge. Nike, the world's largest sporting-goods supplier, and Germany's Adidas, which is No. 2, are benefiting from billions of dollars' worth of soccer shoes, jerseys and other gear sold this year, partly due to the lift supplied by the World Cup.

"Sponsoring the final teams is the grand prize for the apparel brand," said John Kristick, global chief executive officer of ad buying agency GroupM, part of WPP. "There will be an immediate sales lift in the winning country, but these teams are football powerhouses -- where, win or lose, the support for product sales will remain strong," said Mr. Kristick, who has been involved with the World Cup since 1994 and headed an unsuccessful U.S. bid to host the 2022 World Cup.

The World Cup "certainly creates a brand-halo effect," Tom Ramsden, Adidas's marketing director for soccer, said before the Argentina game on Wednesday. "That halo effect then does translate into an increase in sales. I believe you'll see a growth in sales and visibility and brand exposure in all markets."

Argentina's fleet-footed Lionel Messi has been at the center of Adidas's World Cup advertising efforts, while Germany sports the Bavarian company's gear from head to toe, including its distinctive black, white and orange cleats.

Adidas has soccer intertwined with its history dating back to World Cups in the 1950s, and this year it's again the tournament sponsor and match ball supplier. The company has said soccer sales will surpass 2 billion euros ($2.7 billion) in 2014 and has sold more than 8 million replica World Cup jerseys -- including 2 million with Germany's stripes and eagle.

Selling outside home markets
Germany's stars, including attacker Thomas Mueller and goalkeeper Manuel Neuer, have sparked excitement around the team, and more than 500,000 Germany jerseys will be sold outside Europe this year, compared with about 300,000 in 2010, the year of the World Cup in South Africa, Adidas has said.

"The victory of the German national team already ensures that Adidas will be the most visible brand by far in the World Cup final," CEO Herbert Hainer said in a statement yesterday after Germany's dismantling of Brazil. "Adidas is the clear number one in football globally."

Nike, which started making soccer cleats in 1994, has nearly matched Adidas's share in the German company's flagship sport. The company reported June 27 its soccer sales for the fiscal year ended in May jumped 18% to $2.3 billion.

At the tournament's start, Nike sponsored 10 teams featuring the Netherlands, Brazil, the U.S. and France, to Adidas's 9, including Argentina, Germany, Colombia and Spain.

Nike and Neymar
Nike's top star, Cristiano Ronaldo, was part of the Portuguese team eliminated last month in the first stage of play. And Brazil's Neymar, another Nike talisman, had to be carried off the field during the team's July 4 match against Colombia, which preceded its meltdown versus Germany.

"As a football brand, it's not about one match, it's about every match," Nike spokesman Charlie Brooks said by email, "and the World Cup for us has been about the incredible brand energy and business benefit throughout the months leading up to it and the month of the tournament itself, not just the final."

Going into the final game, Adidas has the three highest goal-scorers in the tournament: Uruguay's James Rodriguez with 6 goals, Germany's Thomas Muller (5) and Argentina's Lionel Messi (4).

"The Adidas f50 football boot is the highest-scoring boot of the tournament with 46 goals, and is the most mentioned product hashtag (#f50) on Twitter with over 230,000 mentions vs. our key competitors," Mr. Hughes said in an email.