The American Society of Magazine Editors has updated its guidelines for editors and publishers to further address sponsored content and "native" advertising online. The update is the organization's first since 2011 and comes in response to magazine editors' questions on the topic. 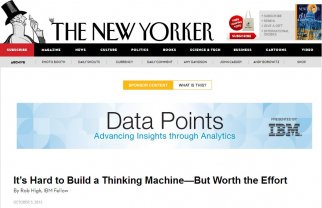 New language suggests magazines use the term "sponsored content" to help set apart native ads, which usually are designed to mimic a site's editorial content. Native ads should also include "a prominent statement" or "What's This?" link at the top to explain the origins of the article, the new guidelines say.

The portion that seems most likely to cause contention, however, says native ads "should not use type fonts and graphics resembling those used for editorial content and should be visually separated from editorial content."

That would seem to require a change from magazines such as Forbes, one of the most prominent publishers to put a major emphasis on sponsored posts. It lets paying advertisers publish posts that look very similar to articles by Forbes staff but carry a "BrandVoice" label at the top next to the marketer's logo, a line of text reading "Connecting marketers to the Forbes audience" and a "What is this?" link that readers can click for a fuller explanation.

A spokeswoman for Forbes said BrandVoice advertisers are "transparently identified" and their posts are clearly labeled. "The program is now three years old," she said in an email. "Our data shows BrandVoice content is extensively read and widely shared. Our audience benefits from the insights our marketing partners have to offer."

ASME CEO Sid Holt said some magazines are using the same type for ads and articles, but declined to specify them. "There are definitely publications that are using the same font and graphics," he said. "And they will likely disagree with this position."

ASME studied how The Atlantic and The New Yorker approach sponsored content for examples of how to do it right, according to Mr. Holt. Both titles have introduced sponsored articles this year, he said, without confusing readers. (The Atlantic caused a minor uproar when it published an article sponsored by the Church of Scientology that some people said wasn't sufficiently labeled. The magazine has since corrected course, Mr. Holt said.)

"We're not making a judgment for or against native advertising," Mr. Holt said.

ASME first introduced its guidelines in 1982 in response to print advertorials, Mr. Holt said. In extreme cases, magazine issues that violate ASME's rules can be excluded from consideration from the society's National Magazine Awards.

ASME is the latest group to focus attention on native advertising, which is spreading as publishers and marketers seek ways to engage readers with online ads. The Federal Trade Commission is expected to hold a workshop on the matter in December. Meanwhile, the National Advertising Division investigated a sponsorship campaign running on Mashable. And the Interactive Advertising Bureau has convened a task force to explore the topic of native ads.

"We're not law givers," Mr. Holt said of ASME. "We're articulating best practices for the industry for magazine editors. We do feel very strongly that a self-regulating industry should follow these guidelines."

The alternative is for the FTC to issue its own rules, an outcome the magazine industry should seek to avoid, he said.