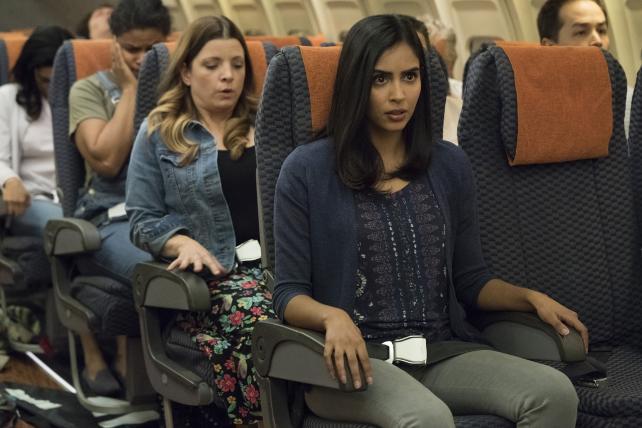 The 2018-19 broadcast TV season officially kicked off on Monday night, and while recent upheavals in the executive ranks have conspired to put something of a damper on the opening-night revels, for advertisers it was business as usual. Which is to say that many of the Big Four networks' top returning shows took a pounding in the Nielsen ratings, while at least one newcomer got off to a rip-roaring start.

For CBS, which found itself having to rebuild its once-formidable Monday prime-time lineup after the night lost nearly 25 percent of its audience—and which must confront the season that lies ahead in the absence of longtime leader Les Moonves—the opening deliveries couldn't have been more disheartening.

Leading off its twelfth and final season on CBS, "The Big Bang Theory" averaged 12.9 million viewers and a 3.8 rating in the network's primary ad sales demographic, which works out to 4.61 million adults 25 to 54. And while those numbers beat out everything else on broadcast TV Monday night, they also marked a significant fall-off from last season. Per Nielsen live-plus-same-day data, the "Big Bang" audience shrank 27 percent versus its fall 2017 premiere (17.7 million viewers), while the 25-to-54 demo plummeted 34 percent. All told, 2.37 million fewer members of the age bracket that CBS advertisers most covet tuned in for the beginning of the end of the "Big Bang" saga.

"Big Bang" spinoff/prequel "Young Sheldon" took an even bigger hit Monday night, averaging 10.6 million viewers and a 2.8 in the demo—good for 3.38 million adults 25 to 54. Not only did "Young Sheldon" squander 26 percent of its "Big Bang" lead-in, but in shedding some 3.21 million adults 25 to 54, the show's demo delivery was nearly halved from its series premiere a year ago.

CBS's diluted, but still potent, 8 to 9 p.m. audience didn't give its ballyhooed "Magnum P.I." launch quite the boost it had hoped for, as the reboot scared up a serviceable (if unspectacular) 8.12 million viewers and a 1.9 in the target demo. And while its total audience topped Fox's "9-1-1" by around 1.5 million viewers, "Magnum" couldn't out-perform its direct competition where it mattered most. "9-1-1" edged "Magnum" by three-tenths of a ratings point, or around 316,000 adults 25 to 54, while eclipsing the older-skewing CBS drama by more than half a million (558,000) adults 18 to 49.

In its official Season 2 premiere (a special preview episode that aired Sunday night won't be factored into the show's final Nielsen tally), "9-1-1" managed to retain 90 percent of the target audience that turned up for its Jan. 3 series debut. Buyers believe "9-1-1" has the makings of a top-rated series, projecting that the medical drama will average a 1.8 C3 rating and do a 2.1 in C7 over the course of its sophomore season.

Another hospital-set show that buyers have put a lot of stock in is ABC's "The Good Doctor," which returned Monday night for its second season in the Monday 10 p.m. slot. Although "The Good Doctor" last year was a lifesaver for ABC, boosting the ratings in the hour by 157 percent compared to 2016-17, the show got off to a shaky start Monday, drawing 7.35 million viewers and a 1.3 rating, which translates to 1.66 million adults 18 to 49. In delivering 1.13 million fewer members of ABC's so-called dollar demo than it did in its year-ago premiere, "The Good Doctor" saw the most significant portion of its audience dwindle by 40 percent.

That many returning series saw so much flux in their 18-to-49 demos may be seen as a function of the general aging of the broadcast TV audience. Per Nielsen, the median age of the viewers who tuned in for the very first night of the 2018-19 season was a wizened 60.1 years old, up 5 percent from the year-ago 57.4 years. The youngest-skewing show, "9-1-1," boasted a still-ripe median age of 56 years, or seven years beyond the terminal point of Fox's target demo, while the eldest-skewing offering, ABC's "Dancing with the Stars," posted a median age of 65.2 years.

It wasn't all doom and gloom on the broadcast front, however, as NBC made an early case for a freshman hit with the launch of its supernatural drama "Manifest." Produced by Robert Zemeckis, "Manifest" bowed to 10.4 million viewers and a 2.2 in the demo, which works out to 2.78 million adults 18 to 49. Not only did "Manifest" become the first NBC series to outperform lead-in "The Voice" in its series opener, but it also scared up 1.1 million more advertiser-friendly viewers than did its fall 2017 predecessor, "The Brave."

Speaking of "The Voice," in averaging 9.66 million viewers Monday night, NBC's venerable singing competition for the very first time premiered to fewer than 10 million fans. The two-hour table-setter also delivered a 2.0 rating, or 2.62 million adults 18 to 49, which marked a 23 percent decline versus its year-ago 2.6 rating/3.39 million demographically relevant viewers.

NBC's strong showing comes as entertainment chairman Bob Greenblatt prepares to step down from his perch after nearly eight years of service. After developing and championing hits like "The Voice" and "This Is Us," Greenblatt told staffers that he departs "with very mixed feelings," adding that his tenure at NBC "has been one of the most rewarding experiences of [his] life."

Replacing Greenblatt are the newly appointed co-chairs George Cheeks and Paul Telegdy. Cheeks most recently served as co-president of Universal Cable Productions and NBC's late-night programming, while Telegdy was president of NBC's Alternative and Reality Group.

If NBC's stability suggests that it is well-positioned to ride out the change at the top—the network has won four of the last five seasonal ratings titles and actually improved its overall deliveries in 2017-18 in the midst of broadcasting's 9 percent decline—there's also an argument to be made as to which executive is more responsible for its recent success. As is the case across the broadcast landscape, live sports accounts for a disproportionate chunk of NBC's gross ratings points; as such, NBC Sports chairman Mark Lazarus may be more vital to the Peacock's future than anyone who sits in the programming suite.

Case in point: Take sports and live events out of the mix and NBC's demo average for 2017-18 was a 1.6. Look at prime time as a whole, and that average jumps up to a 2.2. Meanwhile, the average C3 rating for a scripted broadcast series last season was a meager 1.2. As much as NBC is justified in hailing the successes of shows like "This Is Us" and "The Voice," sports is very much keeping the lights on at network TV, and indisputably so when reach and actual commercial impressions are put under the microscope.

For all that, there is something to be said about consistency, a quality that now appears to be in short supply in network TV. Greenblatt's decision to leave NBC was announced nearly two weeks to the day after CBS Corp. CEO Les Moonves was forced to resign amidst a maelstrom of sexual misconduct allegations. Meanwhile, Ben Sherwood, president of Disney-ABC TV Group, is expected to leave his post once the Disney-Fox deal its completed, and word around the campfire has Fox's Peter Rice and Dana Walden taking on key roles at the post-merger TV entity.

Different but the same

While you may need a scorecard to figure out who's running the show at your favorite broadcast network, the inner volatility won't be discernible on your screen of choice. For example, as much as Moonves had his fingerprints all over CBS's programming, having final say in everything from the scripts to casting decisions to show marketing, much of what viewers will see on CBS this fall was determined some time ago. The consumer-facing impact of all the recent changes at the Big Four likely won't be detectable until pilot season rolls around and we start getting a feel for what sort of new projects are being picked up.

Once the very model of consistency, CBS enters the season on the heels of a two-year stretch of historic ratings declines and in the shadow of Moonves' ignominious ouster. In parting ways with the executive who for years had positioned himself as broadcast TV's last True Believer, CBS is counting on entertainment president Kelly Kahl to help maintain its long-running streak as America's most-watched network.

But anyone expecting to see an abrupt shift in how CBS presents itself to the world does so at the risk of underestimating Kahl's fundamental programming philosophy. While he only assumed the reins of the entertainment division last spring, when he was tapped to replace the ailing Glenn Geller, Kahl knows the CBS playbook inside and out, having served for more than two decades at the network. And but for the last two tumultuous weeks, Kahl has spent every day of his tenure reporting to Moonves.

In the near term, expect the most visible manifestations of the broadcast shakeup to make themselves known on the new-look Fox. The network gave advertisers the first taste of what the future holds during its May upfront presentation, when it unveiled a decidedly conservative fall slate of two new sitcoms and the reclamation project that is Tim Allen's "Last Man Standing." Instead of its traditional supernatural dramas and quirky single-camera comedies, the centerpiece of Fox's upfront pitch was its 11-game "Thursday Night Football" slate.

With streaming services like Netflix and Amazon gnawing away at the audience for broadcast entertainment fare—last season the average demo rating for a scripted network TV show was a miserly 1.0—and given viewers' well-documented mania for avoiding commercials in playback, expensive dramas and ensemble comedies are increasingly looking like a dead end for advertisers. As early as the 2019-20 season, viewers should begin to see live sports and other DVR-proof events push much of its scripted fare off into the margins of its primetime schedule.