'The Big Bang Theory' goes out with a … well, you know | Ad Age
Skip to main content
Sign In Register

'The Big Bang Theory' goes out with a … well, you know 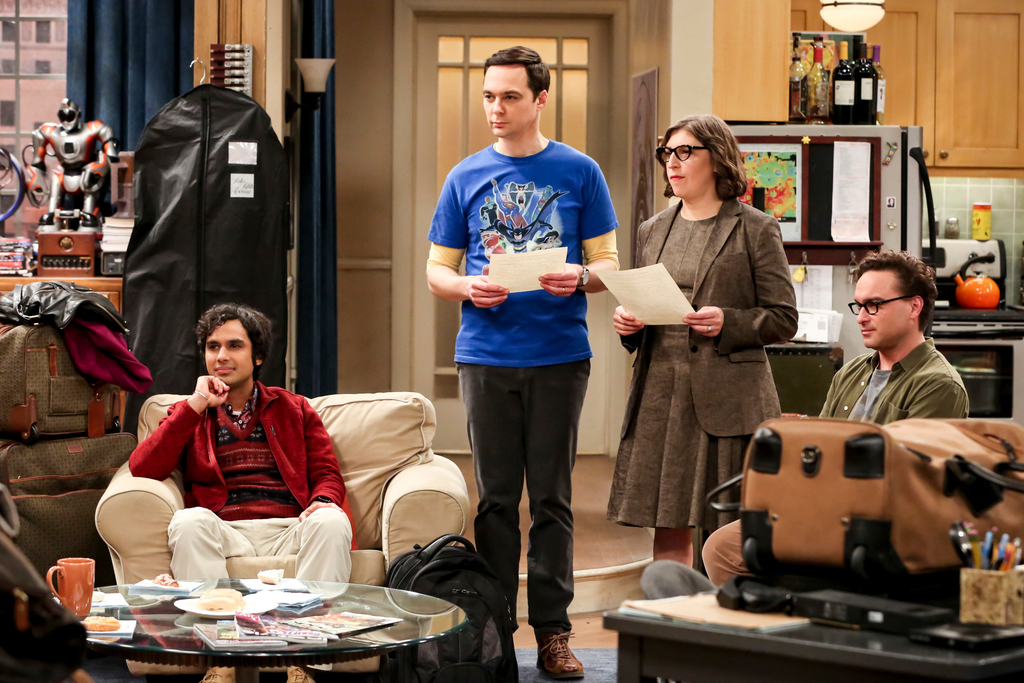 TV’s top-rated comedy closed up shop Thursday night in front of a predictably super-sized audience, as “The Big Bang Theory” ended its 12-season run on CBS with an average draw of 18.5 million viewers.

The final chapter in Chuck Lorre’s landmark comedy series was its most-watched episode in five years. Along with the sheer reach of the finale, the one-hour broadcast also put up some enviable demo numbers, averaging 5.9 million adults 25-54, good for a 4.9 rating among CBS’s target audience, and 4.15 million adults 18-49. The 3.2 rating in the younger demo is the highest for a scripted broadcast series since ABC’s star-crossed “Roseanne” reboot notched a 3.4 on April 17, 2017.

At present, “The Big Bang” capper ranks 20th among the most-watched broadcasts of 2019, trailing NBC’s coverage of the 76th Golden Globes (18.6 million). All told, the finale didn’t quite live up to the all-time “Big Bang” record of 20.4 million viewers, which was set during the Season 7 premiere back in September 2013. With an average rating of an 8.0 in CBS’s dollar demo, that episode was a far more efficient buy than last night’s send-off; per Nielsen, 9.6 million, or 47 percent of those 20.4 million total viewers were members of the 25-54 crowd, whereas only 32 percent of Thursday night’s deliveries were in the target.

Media buyers last week said 30-second spots in the “Big Bang” finale had fetched as much as $1.4 million a pop, or about five times the $286,000 unit cost advertisers forked over in last year’s upfront bazaar. That CBS was able to command such a vertiginous rate is testament to the show’s massive popularity; despite bowing during the waning days of President George W. Bush’s second administration, “Big Bang” still managed to close out its last season as TV’s No. 1 scripted program.

The “Big Bang” unit cost is in line with what CBS charged back in May 2005 for the final episode of its “Everybody Loves Raymond.” Ray Romano’s sitcom swan song averaged 32.9 million viewers.

According to iSpot.tv data, among the most visible marketers that bought time in the “Big Bang” finale were Universal Pictures (“Yesterday”), the University of Phoenix, Nissan, State Farm, Verizon, Gillette, Capital One, Apple (iPhone), Google Phones and Facebook (Portal). In keeping with show creator Chuck Lorre’s observation Wednesday afternoon that pharma spend had been the lifeblood of “Big Bang”—“It’s mostly drugs, I’ve noticed,” he said during CBS’s upfront presentation—among the brands in the mix last night were Abbvie’s psoriasis palliative Humira and Pfizer’s partial nicotinic agonist, Chantix.

The all-time record turnout for an American TV series was secured by CBS on Feb. 28, 1983, when the 150-minute “Goodbye, Farewell and Amen” scared up a staggering 105.9 million viewers. Approximately three-quarters of all televisions in use at the time were tuned in to CBS.