Explicit references to body parts on medical dramas are commonplace, so it must take something really shocking to rattle the heroine of "Emily Owens, M.D.," the young-doctors serial set to begin in October on the CW. 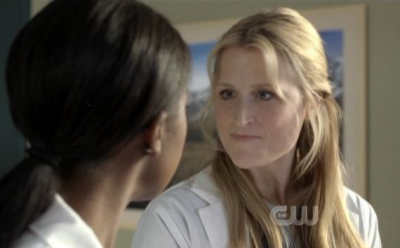 But in one scene from the pilot, a character makes an unmistakable attempt to invoke a word largely shunned by polite society -- and the impolite parts of it as well.

Emily Owens (played by Mamie Gummer, Meryl Streep's daughter) becomes embarrassed when her pager goes missing. She believes it was stolen by her nemesis, Cassandra. When the two medical interns are told to find a senile woman's missing daughter and determine her name, bad feelings emerge, though couched in terms that ought to be safe for TV:

Cassandra: Maryann Cramden, maybe?
Emily: You know, it was actually pretty funny? The whole pager gag? Karnen?
Cassandra: Or Connor. And again, I didn't take your pager.
Emily: I just wish you'd come clean. There could be an 's' at the end. Crains.
Cassandra: There's nothing to come clean about. Krasner.
Emily: It's just -- I know you did it. Kravner!
Cassandra: You don't know anything! Kraven!
Emily: I do! Kravitch!
Cassandra: I didn't steal it! [Looks into Emily's eyes.] Krunt!

Did she just say what we think she said? Emily Owens' expression in the aftermath would seem to indicate so.

TV networks have long sprinkled salt into the dialogue of their scripted dramas and comedies, but now they're testing out tastes heretofore banished from the kitchen. In an attempt to sling some witty dialogue, the writers of "Emily Owens" have nodded to a vulgar term rarely heard even in TV shows and movies looking for an edge. If the word signified in "Emily Owens" can be hinted at on free, over-the-air broadcast TV, however, does that mean it has become less offensive?

Not too long ago, TV networks would never -- never -- even allude to such a term. Now, after running shows with titles such as "$#*! My Dad Says," "Don't Trust The B---- In Apt. 23" and "GCB" (for "Good Christian Bitches") on old-school networks like CBS and ABC, TV is tilling new ground for profanity.

Time was, the freer hand enjoyed by cable networks such as HBO and FX put pressure on broadcasters to try rougher dialogue. These days, the squeeze is coming from nascent media outlets happy to rewrite old rules. Current audience tastes are shaped by "entertainment from unregulated markets" such as Howard Stern on satellite radio and uncensored rap on Pandora, said Philip Dalton, assistant professor and chair of speech communication, rhetoric and performance studies at Hofstra University. Premium cable is also still pushing the boundaries of taste as it tries to lure top talent and gain notice.

Because of all this, Mr. Dalton said, many broader TV networks "face a real challenge to find and build audiences while following tamer conventions."

Basic cable is getting in on the act. Some TV viewers will take another step into the wild on July 15, when NBC Universal's USA will begin "Political Animals," an ambitious miniseries about a harried-but-savvy U.S. Secretary of State played by Sigourney Weaver. After facing down an aggressive reporter, Ms. Weaver's character is reminded that her own mother has referred to the journalist as a "bitch with a capital C."

In a signal of how envelope-pushing the drama is for USA, home to tamer fare like "Royal Pains," that allusion isn't the rawest of the program's offerings. Earlier in the episode, Ms. Weaver tells the leader of Russia via on-screen subtitles that she will "f--- your shit up" if he grabs her rear end again.

To be certain, the "C-word" and variations on it have cropped up on TV before. On "The Sopranos," Paulie Walnuts was once heard to utter the term, and the entire crew at the firehouse that was the center of the FX drama "Rescue Me" once came up with a new word, "twunt," combining two shocking epithets into one ear-ringing term. An FX spokesman said the network has not used and does not intend to use the "c-word" or "f-word" in its programming.

But one can make the argument that those programs skew toward male sensibilities, while the CW's audience is known to veer toward the young and female. Likewise, USA's "Political Animals," with its strong central female character and soapy political plotline, is likely to snare the interests of a female viewer. A CW spokesman declined to comment.

USA executives did not deliberately pepper the script of the miniseries with epithets, said Bill McGoldrick, exec VP for original scripted programming at USA. The show was pitched with that sort of dialogue in mind, he said, and the network felt the words suited the milieu of the program, which features politicians struggling with high-pressure projects and messy private lives.

Even so, "Political Animals" marks a new step for USA, which in the past has largely avoided the use of profanity, he said. Only recently, with the new drama "Suits" and in some instances the spy serial "Covert Affairs," have characters been heard spouting an off-color word or two. USA does expect dialogue in "Political Animals" to spark some backlash from viewers, Mr. McGoldrick said, but any loss of audience would hopefully be offset by new viewers who come to USA for the political potboiler and stay to sample other offerings.

Gritty language "is all right there at our fingertips" thanks to a broader array of available video entertainment, not all of it from traditional sources, Mr. McGoldrick added, and many viewers want to hear dialogue that sounds true to life.

TV has spent decades upping the ante, of course, as programmers try to keep up with modern tastes and cultural values. ABC allowed producer Steven Bochco to weave the word "bullshit" into later seasons of "NYPD Blue." The CW made hay by using the phrase "OMFG" to promote "Gossip Girl." In 2009, when NBC launched "Southland," characters said things such as "show me your tits" and "shut the fuck up," with the potential offending words bleeped out even though it was clear to viewers what they were saying. In 2008, NBC's "30 Rock" jauntily depicted a promo for a fictional TV show called "MILF Island." And characters in SyFy's "Battlestar Galactica" relied heavily on the word "frak" -- a sci-fi version of "fuck" -- in any number of situations.

With so many once-horrifying profanities already being hurled on the boob-tube, TV may be running out of language taboos to break. What kinds of words will surface when script-writers go to the dictionary for inspiration and find the pages bare?