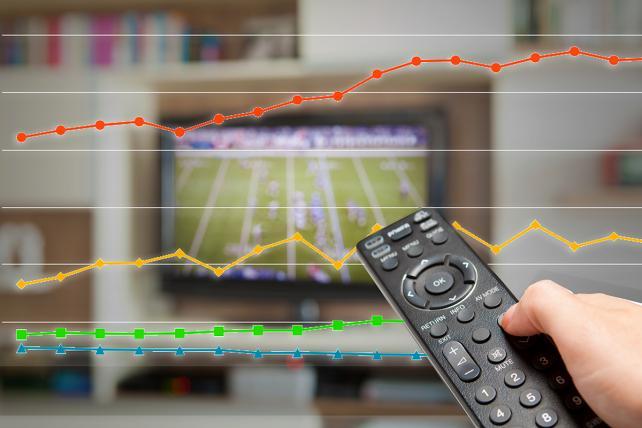 The NFL's season-long ratings rehab continued apace on Sunday, as a pair of the most gripping conference championship games on record served up huge TV audiences—and in one case, a near-record turnout. But as much as an argument can be made in support of the mystic powers of momentum, decades of Nielsen data suggest that it's all but impossible to predict the exact magnitude of Super Bowl deliveries based on the regular-season and playoff ratings.

Not that it matters one way or the other.

Before we get into the Nostradamus stuff, a quick look at the Championship Sunday numbers. The AFC Championship Game was a massive draw for CBS, which averaged 53.9 million viewers and a 27.5 household rating in the late window. Deliveries for the Patriots-Chiefs nail-biter were up 27 percent compared to the analogous year-ago Vikings-Eagles broadcast on Fox, and were sufficiently high to earn bragging rights as the second most-watched AFC title tilt in the 42 years Nielsen's been keeping track of those numbers. The all-time high: 2011's Jets-Steelers game, also a CBS production, which drew 54.9 million viewers.

The Only Game in Town

If NFL-to-NFL comparisons don't exactly butter your biscuit, it's instructive to look at the Pats-Chiefs numbers within the context of scripted TV. According to Nielsen, CBS's Sunday evening broadcast was the second most-watched non-Super Bowl programming to air on a single network since May 14, 1998, when NBC drew 76.3 million viewers with the series finale of "Seinfeld." Among the cultural milestones New England's 37-31 overtime victory eclipsed outright include the "Friends" finale (52.5 million viewers) and Johnny Carson's last night as host of "The Tonight Show" (50 million).

Fox also lit up the ratings scoreboard, although the deliveries for its presentation of the NFC Championship Game weren't nearly as elevated. Tainted by a controversial no-call that robbed New Orleans of a Super Bowl berth, the Rams-Saints showdown averaged 44.1 million viewers and a 24.5 HH rating, effectively flat versus the year-ago early window.

All told, the 10 NFL playoff broadcasts averaged 34.1 million viewers and an 18.9 household rating, good for a gain of 10 percent compared to last year's 30.9 million viewers/17.2 rating. That double-digit postseason boost followed a 5 percent hike in the regular-season ratings.

Given the reach of Sunday's games, and the seemingly endless media narratives that will be spun over the next two weeks—by Feb. 3, the watery ubiquity of the phrase "Tom vs. Time" will be enough to fatigue even the most casual football follower—there's no reason to believe that Super Bowl LIII won't draw far higher ratings than did last year's game. Hell, take a prop bet on it should one make itself available; after all, Super Bowl LII was the least-watched NFL title game in nine years. Nowhere to go but up, right?

Hard to say. As much as the NFL's ratings boomlet would seem to support the thesis that Super Bowl LIII should put up significantly higher numbers compared to the year-ago broadcast on NBC, the data say otherwise. Since the beginning of the century, the year-over-year fluctuations in the Championship Sunday deliveries have been in direct opposition to the corresponding Super Bowl's rate of change no fewer than 10 times, while more proportional results occurred just four times. As stats wonks are wont to say, correlation is not causation.

If the ratings for the final stage of the playoffs are at best a directional indicator as to how the Super Bowl will shake out, many of the traditional factors that make handicapping the ratings for the World Series and NBA Finals have no impact whatsoever on the NFL numbers. For example, as much as league officials are overjoyed to see a Los Angeles franchise back in the Super Bowl after a 35-year drought, the size of the media markets served by the participating teams doesn't seem to determine the size of the TV audience.

If DMA clout were anything to go by, last year's battle between No. 4 Philly and No. 9 Boston arguably should have out-paced the all-time record of 114.4 million viewers set by No. 9 Boston and No. 13 Seattle in Super Bowl XLIX. And by that measure, the 2018 game sure as hell should've eclipsed the 111.9 million viewers served up in 2016 by No. 17 Denver and No. 23 Charlotte. But such an arid accounting would willfully ignore the fact that the Broncos-Panthers game was Peyton Manning's very last outing, while also turning a blind eye to the white-knuckle finish to the previous year's Pats-Seahawks game. (With 26 ticks lift on the clock, Pete Carroll's call for a pass play on second-and-goal from New England's one-yard-line remains the single most dumbfounding decision ever made by a sentient human.)

In fact, market size has never really had much influence over the NFL ratings picture. Year in and year out, the Green Bay Packers are one of the league's biggest national draws, this despite the fact that the team's home market is only the 67th largest on the Nielsen charts. (At No. 36, nearby Milwaukee is also a relatively sleepy home base.) The same holds true with local TV deliveries. On Sunday, the two teams that in the regular season put up the biggest ratings in their home markets, the Saints and Chiefs, were bounced out of contention, while the other top-five draws (the Steelers, Vikings and Packers) did not so much as advance to the playoffs. But as far as the Super Bowl is concerned, none of this stuff really seems to matter.

If we can agree that the Super Bowl is essentially sui generis, an event that is more or less unbothered by outside forces and demonstrably impervious to the factors that make lesser championships a much dicier buying proposition, it should also be noted that ratings for the Big Game don't really matter in the way that they do for everything else.

While undoubtedly a source of fascination for sports media types and ratings junkies of all stripes, Super Bowl deliveries are practically immaterial to the network suits. Because CBS ad sales boss Jo Ann Ross and her team do not offer ratings guarantees to Super Bowl advertisers—a standard upheld by fellow rights holders Fox and NBC—there's no fear of being on the hook for make-goods in the event of an unforeseen slump. Caveat emptor, if such a thing can be said for a buy that will deliver at least 100 million impressions at the time the creative airs.

If from the supplier's perspective, Super Bowl ratings are primarily about bragging rights and inflating the host network's full-season demo deliveries—they are also useful in establishing a baseline unit cost for the next network in line to host the game—a significant ratings slide coupled with a price increase can give budget-minded advertisers fits. CPM flux can have a chilling effect on brand investment; a marketer who saw the cost of reaching 1,000 viewers jump 35 percent in the four years between Super Bowl XLVIII and Super Bowl LII may elect to sit out this year's game.

However the Patriots and Rams fare down in Atlanta—New England is currently booked as a 2.5-point favorite, so Brady & Co. can knock it off already with all the "underdog" shtick—there are a few can't-miss outcomes on which we would confidently wager a kidney. Barring an extinction-level event, Super Bowl LIII will be the most-watched, highest-rated broadcast of 2019, and nothing else will even come close. And as much as it's difficult to determine exactly why the game crashed the 100-million-viewer barrier when it did (in 2010, Super Bowl XLIV broke the longstanding U.S. broadcast record of 105.9 million viewers set by the series finale of "M*A*S*H"), for nine years there's been little cause to worry that the game might slip back into the high 90s.

That's not going to change on Feb. 3, however unappealing the prospect of bearing witness to a sixth Brady-Belichick coronation may be to those of us who pronounce their terminal Rs and can't make the etymological distinction between a spuckie and a grinder.

Perhaps this is the year the Super Bowl will ascend back into the rare air of 110 million-viewer-plus territory, a dreamy part of the stratosphere the game inhabited six times between 2011 and 2017. But even as little as a 5 percent improvement over last season's deliveries gets CBS to around 108.9 million viewers, which would make Super Bowl LIII the seventh-biggest draw in NFL history.

Again, the significance is relative, but it's hard to resist juxtaposing that projection with network TV's current primetime deliveries. Through Week 16 of the 2018-19 broadcast season, the Big Four nets are averaging a hair over 6 million viewers, or roughly 5.5 percent of the audience CBS can expect to reach on Super Sunday.