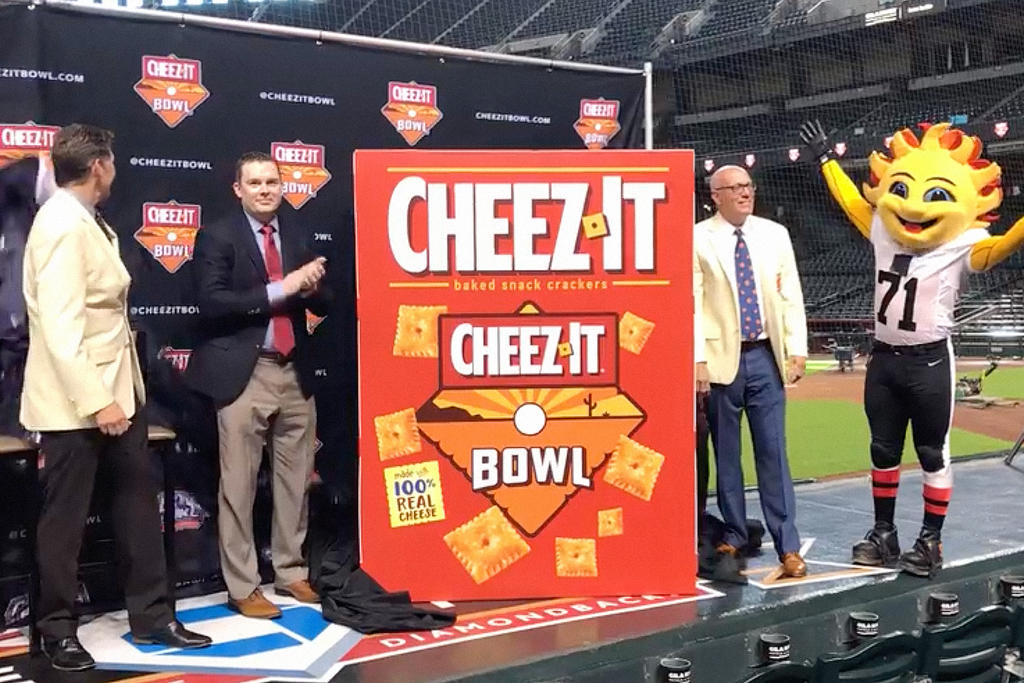 Welcome to the latest edition of Ad Age TV Brief, our roundup of news from the world of broadcast, cable, streaming and beyond. *Extremely Mr. Roarke Voice* Smiles everyone, smiles!

Say Cheez-It:
Kellogg’s Cheez-It has inked a multiyear pact to serve as an official sponsor of the College Football Playoff series. Cheez-It joins a rooster of 14 other CFP backers, including the 10 brands that signed on way back in 2014 (Allstate, AT&T, Capital One, Chick fil-A, Dr Pepper, Ford, Gatorade, Goodyear, Northwestern Mutual, Taco Bell), when the new postseason package first began to take shape.

College football diehards may recall Cheez-It’s inaugural sponsorship of the late-December game that previously had been billed as the Cactus Bowl. (Before that, it was the Buffalo Wild Wings Bowl. And before that, you either knew it as the Insight or Insight.com Bowl. Ah, memories.) At any rate, Cheez-It’s first foray into a marquee college football sponsorship was a bit of a jolly nightmare; among the highlights of the game’s drive summary were: 15 punts, 9 interceptions and a missed field goal, all in service of a 7-7 comedy of errors that was settled in overtime with a 27-yard chip shot. Oh, and: TCU quarterback Grayson Muehlstein finished the night with a QB rating of 1.7. So!

For all the unintentional slapstick that awaited viewers of last year’s TCU-Cal showdown, the Cheez-It Bowl wasn’t a complete dud. Nielsen data ranks it 18th among all 2018-19 bowls, a stat that was likely influenced by the fact that there’s literally nothing else to watch on the night after Christmas. Your other options were a “Guy’s Grocery Games” episode titled “Clash of the Vegetables!” or something called “Iron Nun” on the AT&T/DirecTV channel. At any rate, Cheez-It’s sponsorship likely paid off in the long run; per a recent rEvolution study, bowl sponsorships increased brand opinion from 34 percent to 55 percent and boosted purchase intent from 21 percent to 54 percent between year one and year five.

As with all previous CFP sales, the deal was brokered by rights holder ESPN, although you wouldn’t have guessed from a glance at the release Disney pumped out on Thursday morning. ESPN is mentioned only at the very bottom of the memo, in a bit of boilerplate having to do with the network’s 2019-20 bowl game coverage. As much as the ESPN ad sales business has been integrated with that of sibling broadcaster ABC, the half-hearted acknowledgment of the sports flagship—not to mention the team that originally booked and maintained these megabucks relationships (pour one out for Ed Erhardt)—is an unfortunate oversight by the usually fastidious Mouse House.

Fifty Shades of Grey Gardens
The broadcast TV audience gets especially creaky during the summer, as younger viewers build campfires, menace strangers on street corners and strive to brew up the mythical fifth Loko. But rather than bemoan the prevalence of aging TV fiends, savvy marketers should look at the sultry season (or what’s left of it) as a time to target older consumers on the cheap. Come on, people: Not everyone’s in the market for an Apple Watch or feels compelled to wear Kurt Cobain’s kicks.

Come Together
While Shari Redstone’s bid to future-proof her media empire has only just begun, investors may not have to wait long to see how the reunification of Viacom and CBS will boost the company’s linear TV business. “In the near term, a combined ad sales force with greater digital inventory should drive CPMs and ad revenue higher in next year’s upfront,” MoffettNathanson media analyst Michael Nathanson wrote in a note he issued the morning after the merger was announced. (We’ve seen the same dynamic play out with NBC and the NBCUniversal cable nets.) As Nathanson went on to note, Viacom and CBS together account for 23 percent of all impressions but lays claim to just 18 percent of the advertising dollars in play, and a blended sales force could go a long way toward bridging that gap.

Blocking and Tackling
Tallahassee Democrat reporter Curt Weiler on Wednesday broke the news that the ACC Network reached a carriage deal with Charter/Spectrum, which is the “second-largest distributor in the conference’s footprint.” The pick-up comes just a week before the ACC Net’s August 22 launch. While securing a place in the Charter/Spectrum lineup is good news for ACC fans in parts of Florida, North and South Carolina, Louisville and New York (Syracuse joined the conference in 2013), Comcast, Century Link and Dish Network subs may be out of luck, as the three carriers remain holdouts.

Summer Bummer
But for the unclassifiable funhouse mirror/soap opera that is Fox’s “BH90210,” all of the summer’s top-rated broadcast series are unscripted efforts. Hanging onto the top spot by the merest of threads is NBC’s “America’s Got Talent,” which in its 14th season is averaging 9.43 million viewers and a 1.5 in the demo, which represents a year-over-year loss of around 2 million viewers per week and a 29 percent drop in the number of adults 18-49 tuning in. Rounding out the top five are ABC’s “The Bachelorette,” which closed out its 15th season flat with an average draw of 5.85 million viewers and a 1.5 rating; “BH90210” (3.19 million viewers/1.3 rating); ABC’s “Bachelor in Paradise” (4.08 million/1.2) and CBS’s summer warhorse “Big Brother” (4.17 million/1.1). “Big Brother” is currently averaging a 1.4 in CBS’s adults 25-54 demo, down 21 percent versus the year-ago 1.9 rating. In July, broadcast C3 ratings fell 19 percent in the 18-49 demo, as commercial deliveries for the Big Four networks averaged out to a 0.5 rating.