Achievement Is Encouraging for Brand and Magazines in General
READ THIS NEXT
Ad-supported streaming sports: the next big thing

Cosmopolitan magazine has reached what appears to be a milestone: 100,000 paid digital subscriptions.

The Hearst Magazines title seems to have beaten other brands to the mark, reinforcing the idea that digital will be a big platform for Cosmopolitan. But it's also a good sign for magazines' digital ambitions in general. 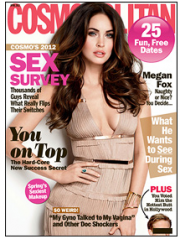 "A couple of years ago, the big question was what's going to happen to magazines like Cosmo in the future," Kate White, the magazine's editor-in-chief, told Ad Age . "There was a little bit of anxiety. What this has done is say that our content will rule and will thrive. Women want our content, and they'll get it on a variety of platforms."

Cosmopolitan has been available on the Zinio platform since 2005 but has seen its digital circulation rise particularly since the advent of the iPad, Nook and Kindle Fire.

Cosmopolitan is benefiting in part from a digital circulation strategy that requires even its print subscribers to buy the digital edition separately. Magazines such as Wired and People, on the other hand, give digital-edition access to every paid print subscriber, undermining their prospects for digital-only sales. Time Inc., the publisher of People, doesn't even sell iPad-only editions.

Cosmopolitan's digital push has also gained from its exceptionally large newsstand circulation, a marketing tool that other magazines can't match. Cosmopolitan reported average newsstand sales of nearly 1.5 million copies over the second half of last year, more than any other magazine.

"It's understood in context that we sell so much more at the newsstand than any other magazine," Ms. White said.

Although Hearst has become very effective at cross-selling its print magazines to existing subscribers, Cosmopolitan is staying focused on its own digital circulation for now. "The big goal will be not so much can I help anyone else, but how fast can we grow it," Ms. White said.

So how is the momentum in Cosmopolitan's digital product affecting the way the magazine works? The team has made an effort to have developers in-house to work with editorial staffers and tries to ensure that there's no divide between the print and digital staff, Ms. White said. "No one works [just] on the website or the Cosmo for Guys app," she added.

December 2009
Introduces an iPhone application called Cosmo's Sex Position of the Day, based on the best-selling book "The Cosmo Kama Sutra" and featuring 77 sex positions.