Sold for $10 billion less than their asking price, the Fox RSNs no longer call the shots in the distribution wars
READ THIS NEXT
More-subdued presidential debate sees drop-off in TV viewers 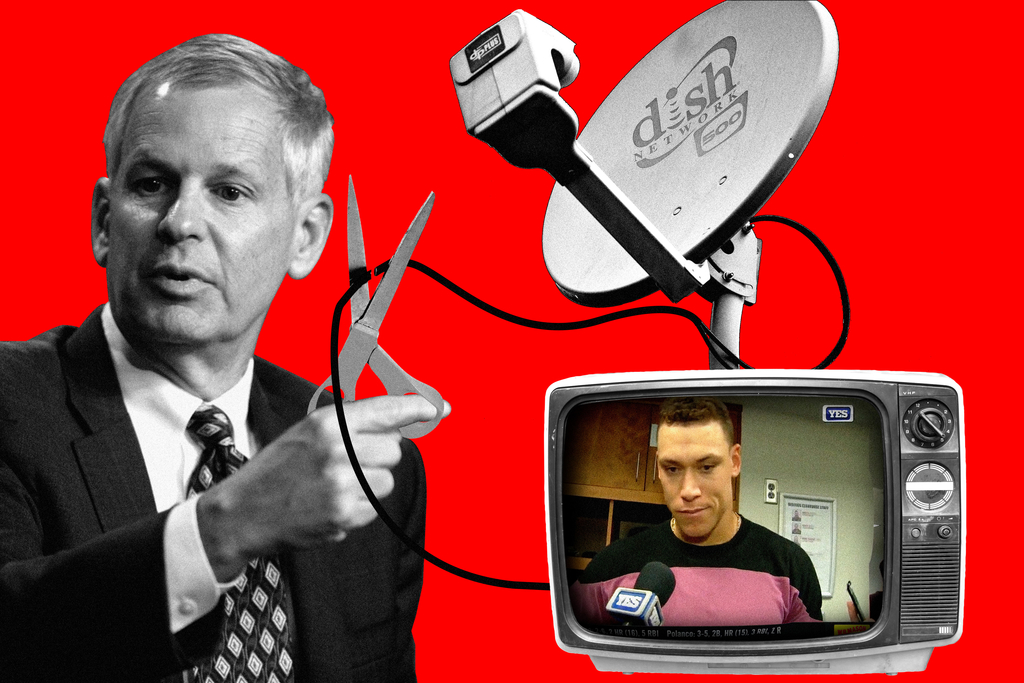 The co-founder and former CEO of the nation’s fourth-largest subscription-TV service appears to have sounded the death knell for the regional sports networks model, telling investors that Dish Network is considering dropping the Fox Sports-branded channels permanently as the two sides continue their recent carriage standoff.

Speaking on the satellite company’s second-quarter earnings call, Dish Network Chairman Charlie Ergen suggested that the blackout of the 21 RSNs and YES Network, which began on Friday afternoon, could extend indefinitely. “It doesn’t look good that the regional sports will ever be on Dish again,” Ergen said, noting that the high cost of carrying the channels may justify dropping them altogether.

“The frustrating thing is, they are not very good economic deals for us,” Ergen said. “We have real data that tells us that the channels are overpriced, and Fox had a lot of leverage to get people to overpay when they owned them.”

Disney acquired the Fox RSNs as part of its $71.3 billion acquisition of 21st Century Fox; in order to avoid an antitrust tie-up, the Mouse House in June 2018 agreed to divest itself of those assets. Sinclair Broadcast Group came to terms on the Fox RSNs late last spring, and its $10.6 billion acquisition of the sports channels is expected to close by the end of the third quarter.

That Sinclair is paying fire-sale prices for the RSNs—the initial valuation of the networks was north of $20 billion—speaks volumes about the state of this once-booming sector. Many analysts now believe that their inflated carriage fees have made regional sports networks all but unsustainable in a time of escalating subscriber losses.

Other than ESPN and its family of spinoff networks, no programming costs cable and satellite TV customers more than the top-tier RSNs. According to SNL Kagan estimates, ESPN charges operators $9.06 per sub per month for its channel bundle, making it by far the priciest offering on the cable dial. With an average affiliate fee of $6.74 per sub per month, the New York Yankees’ YES Network is the most expensive RSN. Both figures are in stark contrast to the average fee for all nationally-distributed cable channels, which works out to around 30 cents a pop.

If the math goes a long way toward explaining why Dish is willing to alienate more than a few of the sports fans in its subscriber base, Ergen didn’t entirely slam the door on the prospect of a renewal with the RSNs. “Sinclair, we think, is a company we want to do business with,” Ergen said. “Culturally, I think we’re pretty well aligned with them. We hate to be in a position to not be able to carry a product that they are investing a large sum of money in.”

At times Ergen batted the RSN issue around like a cat bopping a mouse with its paw a few dozen times before chewing it in half. “Because I’m emotionally involved, I want to keep them. But my nose tells me, that’s not the right thing to do,” Ergen said. “Once you take something down, a month from now, we won’t have anybody who wants a regional sports network. And to put it back up when you’ve lost the customers that did want it, makes no sense.”

Among the RSNs affected by the dispute are three that serve as the home networks for some of baseball’s hottest teams. These include YES, which will air 45 of the American League-leading Yankees’ 57 remaining regular-season games, as well as Fox Sports North, home of the playoff-bound Minnesota Twins, and Fox Sports South, which reps the NL East-topping Atlanta Braves.

Regarded by cable network insiders as the most intractable negotiator on the distribution side, Ergen for decades has been a thorn in the side of any programmer looking to secure significant increases in its monthly fees. But in recent years, Ergen has let other Dish execs fight the never-ending carriage wars; in November 2017, he stepped down from his CEO post in order to oversee the company’s emerging wireless business.

While it’s difficult to qualify how many sports-mad subs Dish may expect to lose as baseball meanders toward the postseason, another recent high-profile dispute didn’t exactly open the floodgates. Despite blacking out HBO, a move that forced “Game of Thrones” enthusiasts to seek out alternative means of watching the show’s final season, Dish’s second-quarter sub losses weren’t devastating. The company lost 31,000 net video subs in the period spanning April 1 to June 30, as its 48,000 Sling TV adds helped undercut the churn of 79,000 Dish TV subscribers.

The 31,000 departures marked a significant improvement compared to the 151,000 video subscribers who decamped in the year-ago quarter. By comparison, AT&T in its second-quarter earnings reported a loss of 946,000 video subscribers, a tally that includes 778,000 customers who parted ways with either its DirecTV satellite service or the U-verse platform. AT&T is currently mired in a carriage beef with CBS.

Ergen said he planned to discuss the matter further with the Dish board sometime this week. But Sling TV Group President Warren Schlichting, who oversees the acquisition and renewal of all Dish content, told investors that he has already advised Ergen to cut bait on the RSN issue.

“The model is broken,” Schlichting said. “The RSNs are just not a good deal. So, the recommendation is actually to leave those RSNs off the service long-term.”

Dish Network closed out the quarter with 12 million subscribers, including nearly 9.56 million satellite customers and some 2.47 million Sling TV subs. AT&T remains the nation’s No. 1 pay-TV operator, having begun the third quarter with 22.9 million video subs, although it is shedding subs at a disproportionate rate. Of the 1.34 million video customers the top four operators lost in the quarter, 70 percent were AT&T subs.