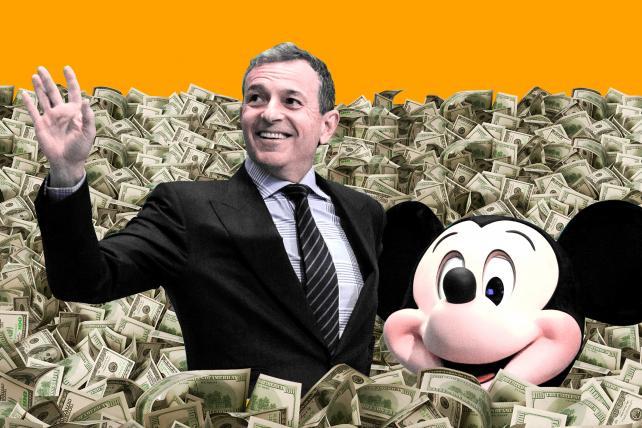 21st Century Fox on Wednesday announced it has received a significantly enhanced acquisition agreement from the Walt Disney Co. that not only tops Comcast's counteroffer of a week ago, but includes a cash component.

Disney's sweetened offer for Fox's studio and select cable assets is valued at $71.3 billion, besting its December 2017 all-stock bid of $52.4 billion, or $28 per share, and eclipsing Comcast's recent all-cash bid of $65 billion. Per terms of the revised offer, Disney will pay $35.7 billion in cash while issuing Fox shareholders some 343 million new shares of stock, which represents a 19 percent stake in Disney on a pro forma basis.

In offering to take on $13.8 billion in Fox debt, Disney's revised proposal effectively adds up to an $85.1 billion transaction.

In a statement that was released in conjunction with the Disney announcement, Fox characterized the new offer as "superior to the proposal made by…Comcast." Disney's beefed-up bid comes as Fox's board of directors gets set to convene today for a previously scheduled meeting in which to consider the June 13 Comcast offer.

"We are extremely proud of the businesses we have built at 21st Century Fox, and firmly believe that this combination with Disney will unlock even more value for shareholders," said Rupert Murdoch, Executive Chairman of 21st Century Fox. "We remain convinced that the combination of 21CF's iconic assets, brands and franchises with Disney's will create one of the greatest, most innovative companies in the world."

The latest salvo in the bidding war between Disney and Comcast reflects the frenzied mergers-and-acquisitions climate that is expected to transform the composition of the media universe over the next several months. Last week's consummation of the long-simmering AT&T-Time Warner merger has all but given the green light to titans like Disney and Comcast looking to build their respective empires by snapping up smaller entities.

Among the Fox assets up for grabs are its film and TV studios, the FX and National Geographic cable network groups, 22 regional sports networks and a 30 percent stake in Hulu. Upon parting ways with those properties, Fox will spin off its flagship broadcast network business and the Fox News and Fox Sports units to form a new standalone company.

Disney said it believes the proposed transaction has a "clear and timely path to regulatory approval." Earlier this spring, the Fox board had decided that a deal with cable giant Comcast would pose too great a regulatory risk to pass muster with lawmakers, although in the wake of the AT&T-Time Warner merger, those concerns may no longer hold water.

In a statement to investors, Disney Chairman and CEO Bob Iger said the combination of assets would create significant value for shareholders of both companies.

"After six months of integration planning we're even more enthusiastic and confident in the strategic fit of the assets and the talent at Fox," Iger said. "At a time of dynamic change in the entertainment industry, the combination of Disney's and Fox's unparalleled collection of businesses and franchises will allow us to create more appealing high-quality content, expand our direct-to- consumer offerings and international presence, and deliver more personalized and compelling entertainment experiences to meet growing consumer demand around the world."

Speaking to analysts on a Wednesday morning conference call, Iger was confident that Disney would prevail over Comcast in the fight to snap up the Fox properties. Iger also acknowledged that one of the more attractive elements of the proposed deal had to do with how the Fox content library and studio assets would go a long way toward arming Disney for a war of attrition with Netflix.

"Direct-to-consumer distribution has become an even more compelling proposition in the six months since we announced the deal," Iger said. "The consumer is voting, and loudly, that these new platforms are very compelling from an experience and value perspective."

For all the certainty Iger projects, many observers believe the Disney-Fox-Comcast intrigue is in early innings. Speaking this morning on CNBC's "Squawk Box," Porter Bibb, managing partner at MediaTech Capital Partners, warned investors to brace themselves for a lengthy and heated battle.

"This is just the beginning of what is going to be an unbelievable bidding war," Bibb said, although he believes Disney will prevail in the long run. "I don't think Bob Iger is walking away. He has every intention of taking over the Fox entertainment assets because it fits his strategy of going over-the-top and leaving legacy media behind and going all-in on streaming.

"Comcast, unfortunately, is going to be losing a Disney battle for the second time. [Comcast Chairman and CEO] Brian Roberts, if you remember, a little over 10 years ago tried to take over Disney and was shown the door by Iger and Co.—and that's going to happen again," said Bibb.