Now that the third season of "Downton Abbey" has premiered on PBS -- winning an average audience of 7.9 million, a 96% surge over the season 2 premiere nearly a year ago -- devotees of the British drama can not only watch but start living like their favorite characters. The show's massive following in the States has spurred a bevy of promotions and product tie-ins that tap into fans' desires to experience the period fashion and sprawling estate. Here's a sampling of categories:

Travel: Viking River Cruises, which sponsors the series, created a three-night tour exploring Oxford University and London and a day at the Highclere, the Victorian estate where "Downton Abbey" is filmed. The cruise is offered as part of the 12-day Cities of Light river cruise between Paris and Prague or on the eight-day Paris and the Heart of Normandy cruise, from March through November.

Engagement Calendar: Workman Publishing rolled out a "Downton Abbey" week-at-a-glance 2013 datebook that includes images and quotes from the show. This is one of the first licensees announced by Knockout Licensing, which was selected by NBCUniversal International TV to launch the brand in the U.S. and Canadian markets. 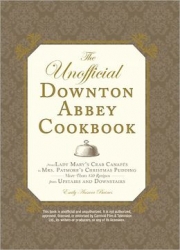 Fashion: Fashion house Ralph Lauren announced in September that it would become the national sponsor of "Masterpiece," the showcase for "Downton Abbey" on PBS. Ralph Lauren had previously channeled the period drama in his fall 2012 collection, when models walked down the runway to the "Downton Abbey" theme song.

Other: Wonder-Shirts will also market a line of "Downton Abbey" tees and tote bags, and Knockout is currently seeking manufacturing and retail partners to introduce other products such as beauty and fragrances, jewelry and home goods.