Disney Prices 'ESPN Plus' Streaming Service at $4.99 Per Month 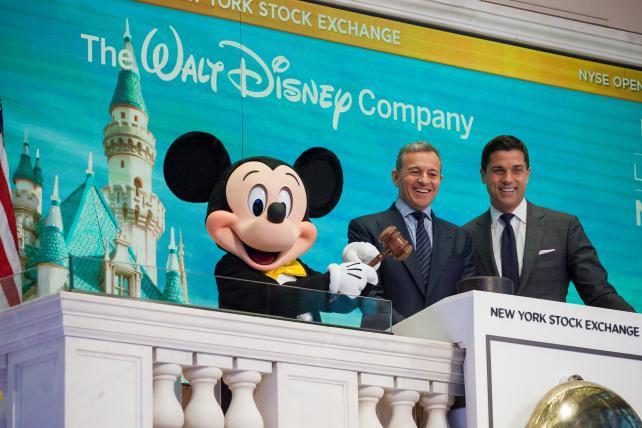 Bob Iger, chairman and CEO of The Walt Disney Co., center, and Disney mascot Mickey Mouse ring the opening bell with Tom Farley, president of the NYSE Group, right, on the floor of the New York Stock Exchange on Nov. 27, 2017.
Credit: Michael Nagle/Bloomberg

During a Tuesday afternoon appearance on CNBC's "Closing Bell," Disney Chairman and CEO Bob Iger said the direct-to-consumer offering ESPN Plus would roll out in the spring, in an introduction that will coincide with the reboot of the network's legacy app. The streaming service will be priced at $4.99 per month, Iger said. The company plans to introduce a Netflix-esque movies-and-entertainment product in late 2019.

In an interview with CNBC's Julia Boorstin, Iger said ESPN Plus would offer "an array of live [sports] programming … that is not available on current channels." Last August, when Iger first took the wraps off Disney's plans for the OTT product, the Disney boss indicated that subscribers to the then-unbranded service would have access to some 10,000 live events that could not be seen via ESPN's linear TV channels.

The prospects for ESPN Plus became more intriguing in December, when Disney proposed a $60 billion-plus deal to acquire a bundle of 21st Century Fox's entertainment assets, a haul that includes the 22 Fox owned-and-operated regional sports networks. Should the deal pass regulatory muster, not only would ESPN enjoy a virtual stranglehold over local sports coverage (the Fox RSNs are home base for 44 MLB, NBA and NHL franchises), but it would also pick up another 5,500 annual live events that could stream on ESPN Plus.

ESPN Plus will be available via mobile devices powered by Apple's iOS and Google's Android operating systems, as well as on Apple TV and Chromecast.

Disney on Tuesday afternoon reported quarterly earnings results that beat Wall Street's expectations, although revenue came up short. Adjusted earnings per share for the company's first fiscal quarter came in at $1.89, up 22 percent compared to the year-ago $1.55, while easily eclipsing Thomson Reuters projections ($1.61). Overall revenue was up 4 percent to $15.4 billion, $100 million shy of the $15.5 billion expected by Thomson Reuters.

Speaking to investors during Disney's afternoon earnings call on Tuesday, Iger made it clear that much was riding on the success of ESPN Plus. "If anything points to what the future of what ESPN looks like, it will be this," he said.

While Disney begins filing the necessary regulatory documents, with an eye toward closing the Fox pact within the next 12 to 18 months, Iger and his team have been having a look under the Fox hood.

"We spent the last six weeks or so learning more about their businesses—in particular, I've been meeting with all their senior executives—and I'll say that knowing what we know now, we're even more encouraged by the assets we are buying and the talent that comes with it," Iger said during today's CNBC telecast.

ESPN Plus represents a way for the sports-media colossus to target younger fans who may not necessarily subscribe to a traditional pay-TV package and who consume the bulk of their media diet on their smartphones. Iger noted that ESPN is starting to see some abatement of its subscriber losses thanks to the acceleration in the adoption of over-the-top services.

"There are signs that young people are coming into multichannel television," Iger told Boorstin. "People that were once called 'cord-nevers' are starting to adopt less-expensive [video] packages."

Revenue at the media networks segment, which includes ESPN and its broadcast sibling ABC, was flat at $6.24 billion. Cable accounted for 72 percent of Disney's TV revenues, or $4.49 billion. That marked a 1 percent increase versus the year-ago period; meanwhile, the broadcast unit saw revenues dip 3 percent to $1.75 billion.

According to Nielsen coverage estimates, the ESPN network now reaches 86.7 million linear TV subscribers, or around 72 percent of all TV households. And while the network has lost approximately 12 percent of its sub base since February 2013, its steadily-increasing affiliate fees help make up for the shrinkage of its linear footprint. With an industry-leading average carriage fee of $7.86 per sub per month, ESPN in 2017 booked an estimated $8.2 billion in affiliate revenue, and that's before the contributions of spinoff nets like ESPN2 and ESPNU are tossed into the mix.

Five years ago, when ESPN reached 98.8 million subs and charged operators $5.13 per head each month, the network generated around $6.1 billion in affiliate revenue.

Disney in its quarterly filing with the Securities and Exchange Commission chalked up the declines at ABC to lower ad sales revenue and elevated production cost write-offs. ABC finished the quarter in last place among the key sales demo, averaging 1.48 million adults 18-to-49 per night, according to Nielsen C3 data. That marked a 15 percent drop from the year-ago period, when the average was 1.75 million.