75th Anniversary Issue Looks to the Future, Not the Past
READ THIS NEXT
Watch ‘SNL’ hilariously try to market L’eggs pantyhose to Gen Z
The cover flashes its message in three parts: 'The 21st Century ... Begins ... Now.'
Credit:

NEW YORK (AdAge.com) -- Esquire began planning for its 75th-anniversary issue a year ago, and that's when it began to explore how to make the October issue a look into the future rather than a guide to the past. And it took 16 months to coordinate all of the processes and people who had to be involved to produce the first E-Ink cover and ad. 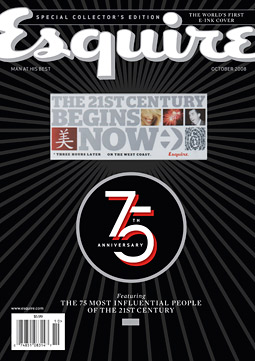 The cover flashes its message in three parts: 'The 21st Century ... Begins ... Now.'
Actually, if you take editor David Granger's word for it, the idea for incorporating E-Ink into an issue began seven years ago, when deputy editor Peter Griffin first started looking into whether the technology could be used as part of Esquire's "Genius" issue. "It was impossible," Mr. Granger told reporters gathered at the cover's unveiling, which took place at a Borders in Manhattan. "But now it's come to fruition."

Partners share work, expense
The magazine's editors had to partner with E-Ink Corp., the company whose technology is behind Amazon's Kindle, to develop a version of its electronic paper technology. They also tapped Structural Graphics to help design the mechanism and display. The partners had to figure out how to get a battery inside the cover to keep it flashing. Parent company Hearst was needed to help Esquire figure out how to produce a cover that was durable enough to survive the binding process, and ask the circulation department to help figure out how to get it out to newsstands intact. (Only 100,000 copies will be available on newsstands, selling for $5.99 as compared to the usual price of $3.99.) The cost of producing the cover? Mr. Granger politely declined to say. Ford Motor Co. was brought in as a partner to sponsor the cover, and is using the issue to introduce its new crossover SUV model, the Ford Flex. 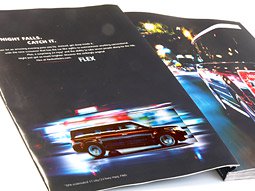 Mr. Granger introduced the anniversary issue and its flashy cover by saying he "considers it a beginning." And while right now the cover is "cool" and a "novelty," he's looking forward to the day when he can use the technology in such a way that writers can update their words as events change. He hopes to reveal the next E-Ink project in the first half of 2009.