Forbes Media, the publisher of the eponymous financial magazine and website, is exploring a sale. 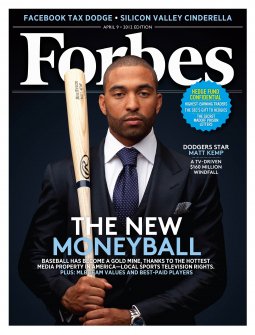 The company is working with Deutsche Bank AG to consider its options.

In a memo to staff Friday morning confirming a report by Bloomberg News, CEO Mike Perlis said the company had received unsolicited offers along the way and now expects interest from "numerous" contenders.

The print edition of Forbes faces the same headwinds as other publishers. Ad pages in Forbes and sibling Forbes Life this year through the Nov. 18 issue declined 10.6% from the period a year earlier, according to the Media Industry Newsletter. Its total paid and verified circulation inched up 1% to 932,884 through the first half of 2013, according to its report with the Alliance for Audited Media. Single-copy sales, a sliver of total circulation but a struggle for most magazines, climbed 18% at Forbes in the first half to 29,482.

But the company has reinvented itself online, expanding traffic partly by assembling a network of paid and unpaid contributing writers. It has also become one of the standard-bearers of "native" advertising, the sponsored posts that try to fit in with a site's editorial surroundings, under the BrandVoice banner.

BrandVoice, which allows advertisers to publish their own articles directly to Forbes.com, has attracted more than 30 sponsors since its introduction in 2010 -- when it was called AdVoice -- and, for the first time, helped digital revenue surpass print at Forbes in the first half of 2013, the company has said. Last month, Forbes also said 20% of its ad revenue this year will come from buys that include elements of BrandVoice, with the proportion expected to hit 30% by next year.

That's below a prediction from 2012, however, when an executive there said packages including BrandVoice buys would likely comprise 25% by 2013.

In 2006, private equity group Elevation Partners, partly owned by U2 lead singer Bono, bought a minority stake in Forbes. "There may be some requirement for liquidity for Elevation Partners," said Reed Phillips, managing partner at Reed + Phillips, "And if there is a requirement for liquidity then probably the best way is to sell the whole business."

Right now is the ideal time for Forbes to sell, according to Ken Doctor, a media analyst at Outsell. "It is a moment at the end of 2013 that native ads are very hot," he said.

It's difficult to forecast native advertising's effect on publishing, he added. But what Forbes can rightly claim is that it is a pioneer in native and understands the space. "That makes it a good moment to sell," he said, "especially if you need the liquidity."

So much has been accomplished recently, and we're very much in the spotlight these days. We're seen as innovators with extraordinary business momentum. This year is expected to mark our best financial performance in the last six years, strengthened by revenue growth in digital as well as licensing and conferences. As a result of your tremendous work, we have received more than a few "over the transom" indications of interest to buy Forbes Media. The frequency and serious nature of these overtures have brought us to a decision point. We're organizing a process to test the waters regarding a sale of Forbes Media. We have hired Deutsche Bank to represent us, and we expect interest from numerous suitors.

I'm proud to say that we've accomplished what no other traditional media company appears to have done: established a huge digital audience by efficiently creating quality content at scale, and we're innovating around new business models to maximize that relationship. In the last three years, our unique visitors to Forbes.com have jumped from 12 million to 26 million, according to comscore worldwide. Digital revenues are expected to increase over 25% by the end of the year. In print, through September, we continue to be the share of market leader in our competitive set. Our efforts have also focused on diversifying our revenue streams to complement our advertising-based businesses - and many of our initiatives have come to fruition this year.

I will share more details about the interest in our company as events unfold; however, I was eager to inform you before you hear about this news elsewhere. If you receive any inquiries from the press, forward them to Mia Carbonell in Corporate Communications.

We will have an open conversation about our company at our next Town Hall meeting early next year.

~ ~ ~
CORRECTION: An earlier version of this story said Forbes' print ad pages were down 5.1% through November. Ad Age regrets the error.