Sinclair may be the Mouse House's last best hope for an all-in deal
READ THIS NEXT
Rethinking TV attribution: The full-funnel approach 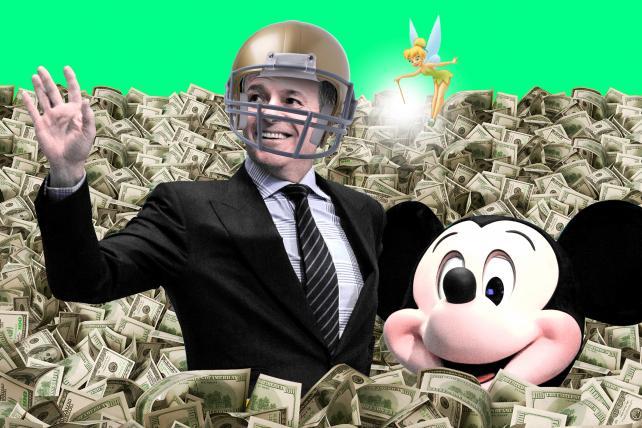 The new-look Fox Corp. on Friday announced that it will not bid for the 22 regional sports networks the Walt Disney Co. is selling off in accordance with the terms of the two media giants' $71.3 billion asset transfer.

In an 8-K filing with the Securities Exchange Commission, Fox stated that it "does not intend to bid for any of the Fox regional sports networks that Disney (or any entity operating on its behalf) may sell as required by the consent decree with the U.S. Department of Justice."

The transaction is expected to close toward the end of the first quarter, perhaps as early as next month. Antitrust concerns compel Disney to sell off the RSNs, which Guggenheim Securities analysts valued at $22.4 billion at the time the Mouse House initially proposed a deal to acquire 20th Century Fox.

Because Disney has had a difficult time finding a new home for the local sports assets, the company almost certainly won't be paid anywhere near that earlier valuation when it eventually does clear the decks.

Given its stated emphasis on sports, live events and news, the so-called "New Fox" that will emerge after the Disney deal goes through was thought to be the most likely contender to buy back the RSNs. But this morning's filing makes it clear that such a move is no longer on the table.

The RSNs on the block serve a host of sports-crazed markets including New York, Los Angeles, Dallas, Cleveland, Detroit and Kansas City. While YES Network is the crown jewel of the bunch—the Yankees/Brooklyn Nets outlet has been the most-watched RSN in the country for 14 of the last 16 years—the Cleveland Cavaliers put up huge numbers on Fox Sports Ohio, while the MLB's Royals are no slouch on Fox Sports Kansas City.

Disney sent out the official bid book for the RSN sale in mid-October. In the early going, traditional TV companies such as Sinclair were said to be interested in looking under the hood (Fox's local sports nets presumably would be a good fit with its portfolio of broadcast stations), while digital titans Amazon and Google and the telco-content hybrid AT&T also were in the hunt. Sinclair is now seen as the last viable bidder for the entire RSN portfolio; meanwhile, Amazon and the New York Yankees are teaming up in an apparent venture to take YES Network off Disney's hands.

Major League Baseball Commissioner Rob Manfred late last year confirmed that the league was considering taking a run at the RSNs, which could go a long way towards consolidating baseball's control over its own in-game assets.

But perhaps the most interesting potential bid is being pieced together by O'Shea Jackson Sr., who in the 1993 track "It Was a Good Day" boasted that he'd "messed around and got a triple-double" in a pick-up basketball game.

In a conference call Thursday Jackson, the rapper/producer/entrepreneur better known as Ice Cube, said he and a business partner were trying to raise enough capital to scoop up the RSNs, adding that tennis great Serena Williams and former NBA legend Julius "Dr. J" Erving were interested in joining the effort. Under the auspices of his upstart basketball league BIG3, the multi-hyphenate Cube reportedly reached out to Viacom for a leg up, but as CEO Bob Bakish stated during Wednesday's Citi TMT West Conference, the media conglomerate has no use for a collection of regional sports networks.

That the RSNs may be sold off piecemeal speaks volumes about how the core value proposition of local sports has changed in the last few years. Once seen as a license to print money, regional sports nets began elevating their carriage fees in order to contend with the massive costs of acquiring the exclusive broadcast rights to local MLB, NBA and NHL games. Many RSNs now trail only ESPN as the most costly line-item expense on subscribers' monthly cable bills; per SNL Kagan estimates, three of the Fox RSNs—YES Network ($6.74), Fox Sports Detroit ($6.69), Fox Sports Arizona ($5.48)—command among the priciest affiliate fees on the menu.

The expense associated with carrying one or more RSNs in a given market and the steady drip of subscribers ditching the traditional cable packages have eroded the value of the sports nets. And some operators are sidestepping that onerous tariff by dropping or refusing to carry RSNs altogether. For example, SportsNet LA, which is jointly owned by Charter Communications and the Los Angeles Dodgers, has failed to gain carriage on any non-Charter service in Southern California. If you're a Dodgers fan and a DirecTV, Cox or Dish Network subscriber who lives in the Southland, you're out of luck.

RSNs have begun migrating to the "skinny bundles" or virtual MVPDs (multichannel video programming distributors), but another threat to the legacy business model may be more difficult to escape. If the feared predations of Scrooge McDuck digital types like Google and Amazon come to pass, many RSNs may find themselves being priced out of the sort of high-impact sports rights deals that justify their very existence. Lose the rights to televise the Phillies, Flyers and Sixers in Philly or the Tigers, Pistons and Red Wings in Detroit, and say goodbye to your entire raison d'être.