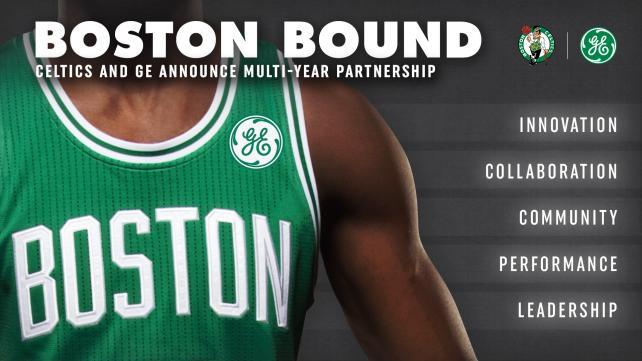 GE and the Boston Celtics announced a multi-year partnership that includes placing the marketer's logo on the team jerseys.
Credit: Courtesy GE

General Electric Co. will pay more than $7 million a year under an agreement with the Boston Celtics to put the company's iconic round logo on the basketball team's uniforms, according to a person familiar with the deal who asked not to be identified.

The industrial giant, which moved its headquarters to Boston last year, also will provide data and analytics services to the Celtics under the multiyear deal, GE said Wednesday in a statement. Representatives of GE and the Celtics declined to comment on the deal's value.

The partnership marks the most high-profile step by GE to embrace its new home city. The company ditched its longtime suburban Connecticut headquarters for an urban campus to burnish its image in the tech community and help recruit engineering talent.

The logo patch will appear in the team's green and white colors on the front left shoulder of game jerseys in the 2017-2018 season, GE said. The National Basketball Association approved uniform sponsorships last year under a three-year pilot program. The Philadelphia 76ers became the first team to reach such a deal, with StubHub paying $5 million a year for a 2.5-by-2.5-inch patch.

WME/IMG advised the Celtics on the sponsorship, which also provides for GE's brand to be integrated into scoreboard promotions and fan events.