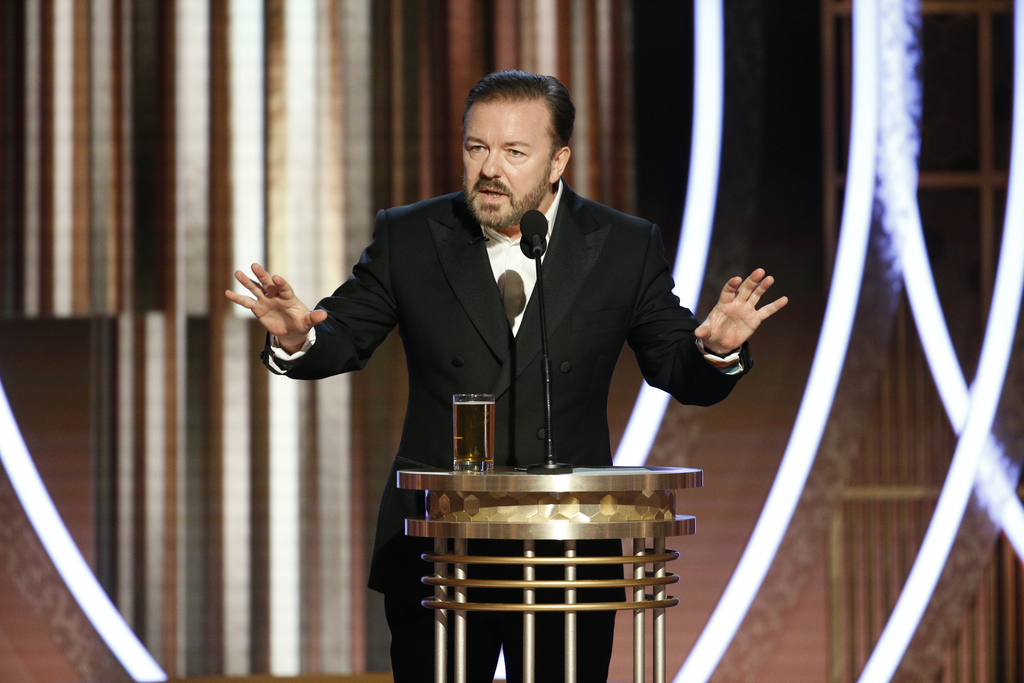 A fast-moving NFL lead-in may have robbed the Golden Globes of a number of would-be viewers Sunday night, as NBC’s coverage of the overstuffed ceremony dipped a bit compared to the year-ago ratings.

According to Nielsen live-plus-same-day data, the 77th Golden Globes averaged 18.3 million viewers, down just 2 percent versus the 18.6 million who tuned in to the 2019 broadcast. And the audience most valued by advertisers took a bigger hit. Last night’s Ricky Gervais-hosted show averaged a 4.7 in the dollar demo, which works out to some 6.1 million adults 18-49; by comparison, the previous Globes averaged a 5.2 rating, good for 6.76 million adults under 50.

While targeted viewership slipped 10 percent year-over-year, it’s worth noting that NBC’s Globes coverage now stands as the season’s top-rated entertainment broadcast, far outstripping the 2.5 rating (3.25 million adults 18-49) Fox delivered on Sept. 25 with the premiere of the second season of “The Masked Singer.” The Globe's 18-49 delivery is also nearly six times as sturdy as the 0.8 rating NBC’s entertainment programs are averaging season-to-date.

It’s likely that some of the Globes’ demo losses may be chalked up to a less-sturdy football lead-in. Preliminary data indicates NBC’s deliveries in the 7 p.m. hour may have been down by as much as 20 percent versus the analogous period in 2019. Whereas last year’s Eagles-Bears playoff game wrapped up just six minutes before NBC threw to the Beverly Hilton, Sunday night’s NFC Wild Card battle between the Seahawks and Eagles concluded a good 21 minutes before Gervais got things rolling in Los Angeles.

Last year’s playoff game was decided in the final minute of the fourth quarter, but the action in Sunday’s game dried up late in the third quarter.

Over the last five years the Golden Globes has been the most consistent awards show on the dial, staying within a range of 18.5 million and 20 million viewers each season. In terms of overall reach, it is the third most-watched statues-and-speeches extravaganza behind the Academy Awards on ABC and CBS’s Grammy Awards.

Among the brands that used Sunday night’s Globes as a marketing springboard were returning sponsors Amazon Prime Video, L’Oreal Paris, Discover Card, Verizon, McDonald’s, Pepsi and T-Mobile. Conspicuous by their absence were Walmart and Chevrolet, which according to iSpot.tv data were among the top spenders in last year’s show.

NBC aired promo spots from its streaming antagonists Apple TV Plus and the aforementioned Amazon Prime. Apple ran a 30-second spot to stir interest in its upcoming five-part doc series “Visible: Out on Television”—the clip featured an appearance by Carol Burnett Award winner Ellen DeGeneres—while Amazon ran a 60-second spot for the Al Pacino vehicle “Hunters,” as well as a brand spot.

When making their buys, it’s likely that Apple and Amazon had no idea that they’d find themselves skewered during Gervais’ characteristically acid monologue.

“Apple rolled into the TV game with ‘The Morning Show,’ a superb drama, yeah,” Gervais said, by way of teeing up his early joke. “A superb drama about the importance of dignity and doing the right thing, made by a company that runs sweatshops in China. So, you say you’re woke, but the companies you work for, I mean, unbelievable—Apple, Amazon, Disney! If ISIS started a streaming service, you’d call your agent, wouldn’t you?”

Netflix, which last year ponied up for a “Bird Box” clip, sat out of this year’s Globes, a move that seemed to anticipate the service’s near-shutout. Of its 34 nominations, Netflix chalked up just two wins, including one for Laura Dern in “Marriage Story” and another for Olivia Colman (“The Crown”).

NBC countered some of the third-party streaming hype with a couple of promos for its own service, Peacock. It ran three 15-second teasers for the service, which is set to launch in April.

Of course, even the in-house calls to action couldn’t entirely obscure the fact that Globes now functions as a 180-minute infomercial for the streaming disrupters and premium cable channels that are merrily devouring broadcast TV’s lunch. Not only were the networks once again completely shut out from the winner’s circle, but the Big Four were not even so much as nominated for any of the major TV awards.

Last year a trio of rabbit-ear shows were nominated, and as it happens, all three (NBC’s “The Good Place” and “Will & Grace” and CBS’s “Murphy Brown”) have either been canceled outright or are serving out the last of their episode orders.