Hearst is likely to call its forthcoming Dr. Mehmet Oz magazine "The Good Life," according to two people familiar with the matter. The title will likely also include the celebrity physician's name, though it's unclear precisely how that will be presented. 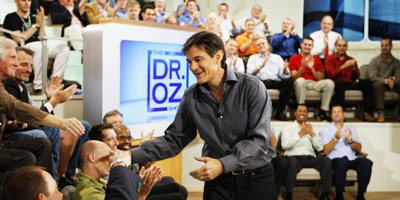 Hearst, the publisher of Esquire and Cosmopolitan, plans to announce the magazine's name on Oct. 15 as part of an event it's calling a magazine upfront, a reference to the TV industry's annual presentations to ad buyers and negotiations for ad inventory. Two pilot issues of the Dr. Oz venture are due starting early next year, the company has said.

Hearst this week also introduced a marketing campaign for the magazine, sending the first of a series of weekly email promotions to many clients and agency employees, according to the company. The emails contain a video of Dr. Oz offering a 40-second health tip, followed by information about the magazine.

When the first issue comes, the company intends to distribute about 350,000 copies to newsstands and send another 450,000 to certain subscribers of other Hearst titles. The magazine could move to regular frequency in the later part of next year if the company deems it successful.

The celebrity physician, who rose to fame appearing on The Oprah Winfrey Show, is host of "The Dr. Oz Show." He has also written for a variety of Hearst titles including Esquire, Woman's Day and Good Housekeeping. The new magazine will focus on physical and emotional wellbeing, food, beauty and "real" women's stories, Hearst has said. It is also the company's latest effort to use a TV brand in print, following O: The Oprah Magazine, Food Network Magazine and, most recently, HGTV Magazine.