But the annual event remains TV's most stable awards show franchise
READ THIS NEXT
Rethinking TV attribution: The full-funnel approach 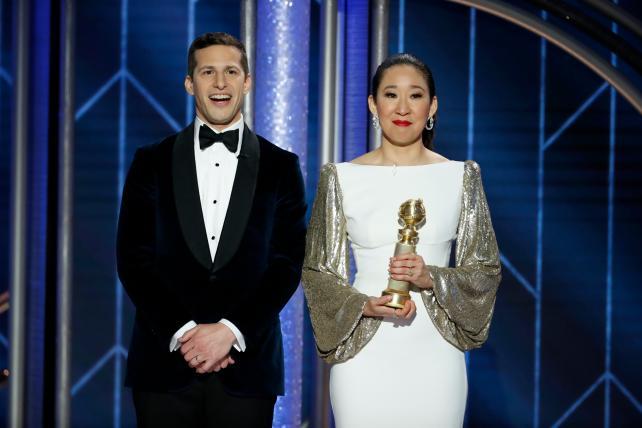 Hosted by Sandra Oh and Andy Samberg, the three-hour broadcast averaged 18.6 million live-same-day viewers and a 5.2 rating in NBC's target demo, which translates to 6.68 million adults 18-49. Retention of the audience that had tuned in for the end of the earlier Eagles-Bears nail-biter was relatively low; per Nielsen' fast national data, the last half-hour of that NFC showdown averaged 38.5 million viewers.

Roughly 42 percent of those watching the NFL playoff game drif away from NBC as the Globes broadcast kicked off. In all likelihood, many of those who elected to sit out the start of Hollywood's award season were residents of the nation's third- and fourth-largest media markets; a missed Bears field goal in the closing seconds left viewers in Chicago's 3.25 million TV households in despair, while Philadelphia's 2.82 million TV owners may have been too busy celebrating the Eagles' big win to bother with the Globes.

While results were a mixed bag—total viewers dipped 2 percent from a year-ago, while the demo improved 4 percent versus the 2018 show—the Globes by far has been TV's most stable awards show franchise. Ratings for the show have fallen just 11 percent since 2015, when the 72nd installment of the Globes averaged 20.9 million viewers; by comparison, deliveries for the Emmy Awards have plummeted 43 percent in the last five years, while the Academy Awards in the same period have lost 39 percent of its audience and the Grammys are down 31 percent.

The 2018 Globes was the year's 63rd most-watched national TV broadcast, slotting between NBC's annual NFL Kickoff Game and the Nov. 18 installment of "Sunday Night Football." It remains TV's third biggest awards gala behind the Oscars and Grammys, while staying well ahead of the Emmys in the ratings race.

Among the biggest-spending brands that used Sunday night's Globes as a marketing springboard were Walmart, Chevrolet, Amazon Prime Video, L'Oreal Paris, Discover Card, Verizon, HBO, McDonald's, Pepsi and T-Mobile. In keeping with network TV's myopic tradition, NBC last night aired promotional spots from its streaming antagonists Netflix ("Bird Box") and Amazon Prime ("Hannah," "The Marvelous Mrs. Maisel") as well as spots from cable rivals FX ("Fosse/Verdon") and HBO, which ran a 60-second teaser for the new seasons of "True Detective," "Veep" and "Game of Thrones" as well as the upcoming series "Watchmen" and "Euphoria." (And yet for reasons that remain shrouded in mystery, accepting spots for one of the competing broadcast networks remains a big no-no.)

If Netflix wasn't already a clear and present danger to the legacy ad model, the streaming service further twisted the blade by tweeting "shoutout to everyone who is watching commercials for the first time in several months" during the first hour of the Globes broadcast.

Then again, any hand-wringing about lending promotional muscle to the enemy is perhaps best characterized as energy wasted. Like the Emmys, the Globes now largely functions as a 180-minute infomercial for the streaming services and premium cable channels that are putting the bite on broadcast TV. Not only were the networks completely shut out from last night's winner's circle, but only three rabbit-ear shows (NBC's "The Good Place" and "Will & Grace" and CBS's "Murphy Brown") were so much as nominated for one of the top TV awards.