Irked by Nike and Kaepernick, Trump takes another swing at the NFL | Ad Age
Skip to main content

Irked by Nike and Kaepernick, Trump takes another swing at the NFL 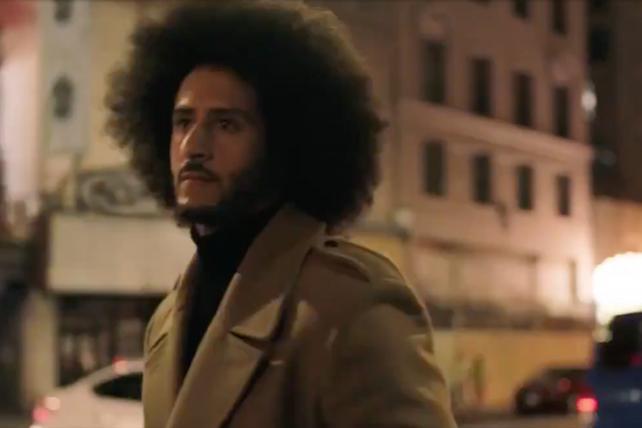 In the midst of a morning tweet storm in which he accused Bob Woodward of fabricating the particularly damning quotes in his new White House tell-all book, "Fear: Trump in the White House," President Donald Trump on Wednesday took a moment to take yet another jab at his favorite target, the National Football League.

Shortly after bemoaning the contents of Woodward's soon-to-be-released look into the inner workings of "crazytown"—that characterization comes courtesy of Chief of Staff John Kelly, who is quoted memorably throughout the book—and puzzling over "why [the] Washington politicians don't change [the] libel laws," the president shifted focus to the NFL and Nike.

"Just like the NFL, whose ratings have gone WAY DOWN, Nike is getting absolutely killed with anger and boycotts," the president tweeted at 9:39 a.m. EDT, before winding up with a salvo about his disinterest in watching pro football until "they" (which is to say, the protesting players) "stand for the FLAG!"

Quick fact check: While NFL TV deliveries did fall 9 percent in 2017, with all national and local windows averaging 14.9 million viewers, 37 of the year's top 50 most-watched broadcasts were NFL games. Average household ratings for all 256 televised regular-season games were off 8 percent year-over-year to an 8.6, down from a 9.3 during the 2016 season.

As one may well expect from a system in which steady demand for ad inventory squares off with a winnowing supply of ratings points, declining NFL deliveries did not eat into the networks' ad sales revenue. According to Kantar Media estimates, in-game NFL ad spending last season added up to $4.64 billion, up 10 percent compared to the year-ago haul of $4.22 billion.

President Trump's latest nugget of anti-NFL invective appears to have been triggered by news that quarterback-cum-activist Colin Kaepernick will be featured in Nike's new "Just Do It" campaign. The former 49ers signal caller signed with Nike in 2011; in addition to the print ad that took social media by storm Monday, Kaepernick is also slated to appear in a TV spot alongside NBA superstar LeBron James, 23-time tennis champ Serena Williams and standout New York Giants wide receiver Odell Beckham Jr.

The new all-star Nike spot is slated to air Thursday night during NBC's broadcast of the NFL Kickoff Game (Falcons at Eagles).

The face of the NFL's burgeoning social activism movement, Kaepernick began drawing attention to racial injustice back in August 2016 when during a preseason game in Santa Clara, California he remained seated during the national anthem. Since he made that gesture, Kaepernick has patiently explained why he chooses to refuse to stand for the playing of "The Star-Spangled Banner," yet many Americans, including the president, don't seem to have gotten the message.

Since opting out of his contract in March 2017, the 30-year-old has failed to find a place on another NFL roster.

That Kaepernick is suing the NFL's owners for colluding to not hire him and Nike is the official supplier of uniforms and sideline gear for the league has led to some speculation about the relationship between the Swoosh and the Shield. But an NFL spokesperson on Tuesday tried to put that sort of thing to rest, issuing a statement that read, in part, "The social justice issues that Colin and other professional athletes have raised deserve our attention and action."

Of course, none of this has discouraged the inevitable displays of misguided patriotism and small-scale vandalism that breaks out whenever Kaepernick or any other protesting athlete expresses his or her First Amendment rights. By Monday afternoon, social media was a swirling vortex of angry Nike customers setting their shoes (and, in at least one case, lawn) on fire and tearing the company's iconic logo from their sports apparel.

Shares of Nike were up 0.44 percent to $79.94 in mid-afternoon trading. In the last six months, the stock price has soared 23 percent, and the company's market cap is currently at $128.1 billion.