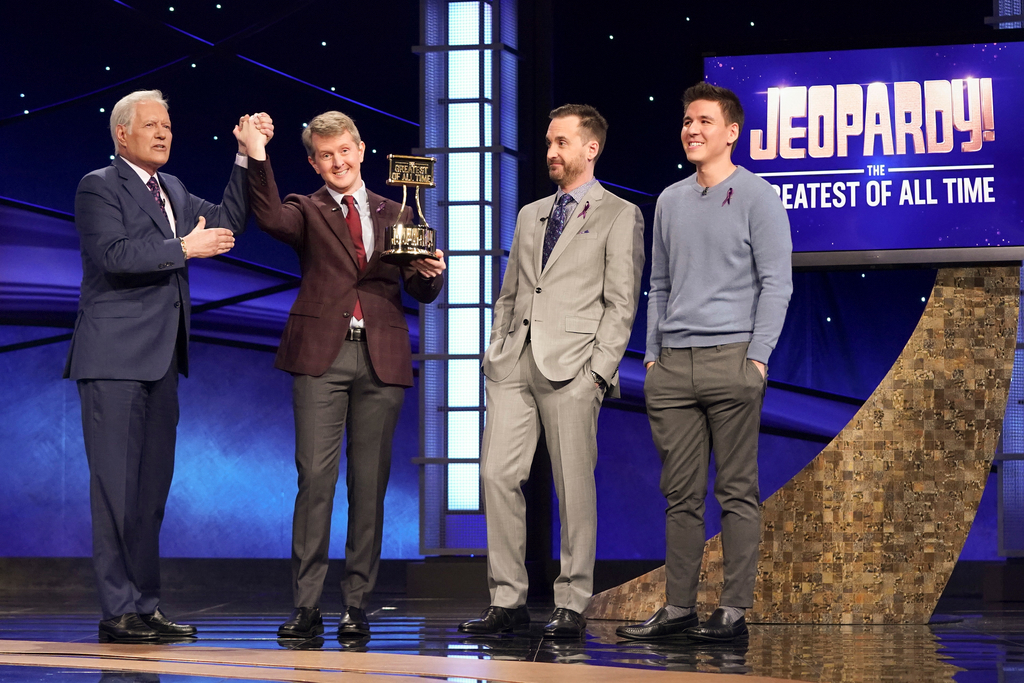 As a showcase for an American television institution and a ratings magnet, ABC’s four-night presentation of “Jeopardy! The Greatest of All Time” was an unqualified success, the sort of high-impact special event that serves to affirm the power of a medium that is forever being nudged in the direction of the boneyard. For all that, it’s perhaps best to set aside any thought that the brainy brawl might give rise to a new primetime franchise; by all accounts, the GOAT tourney was a one-shot deal.

Of course, the Nielsen data all but demands a sequel. ABC’s “Jeopardy!” broadcasts averaged 14.6 million live-same-day viewers, of whom 2.87 million were members of the adults 18-49 demo. Thursday’s round marked the high-water line for the tournament, drawing 15.5 million viewers and a 2.2 in the demo, making it the most-watched and third-highest-rated entertainment program of the 2019-20 broadcast season. (With an average draw of a 2.5 rating, the Sept. 25 premiere of Fox’s “The Masked Singer” edged past the first two nights of the “Jeopardy!” tournament by one-tenth of a point.)

In the NFL-or-bust era, perhaps it’s more instructive to look at how the “Jeopardy!” specials fared in comparison with some of the primetime football packages. Per Nielsen, the Jan. 9 installment of the GOAT tourney out-delivered nine of the 11 “Thursday Night Football” simulcasts on Fox/NFL Network and beat out 16 of the 17 “Monday Night Football” telecasts produced by ABC’s corporate sibling ESPN.

The only knock on the “Jeopardy!” run is that it attracted a much older crowd; with a median age of 64.1 years, the audience was the grayest to flock to ABC this side of the “Dancing with the Stars” set (65.5). By comparison, “Thursday Night Football,” which nearly doubled the “Jeopardy!” demo average with a 4.3 rating, boasted a median age of 53 years.

Still, the absolute deliveries were massive, especially for a network that since the season began is averaging just 5.28 million viewers per night. Per iSpot.tv estimates, the four “Jeopardy!” broadcasts notched 1.3 billion commercial impressions, of which 96 percent were served up live. Such is the nature of event television—an engaged crowd watching in real time is far more likely to stick around for the spots.

If anything, ABC may have somewhat undervalued its GOAT inventory, with the average unit cost coming in at around $200,000 for each 30-second avail. In other words, big-budget brands such as T-Mobile, Microsoft, Geico, Mazda, McDonald’s and Target snapped up a whole lot of impressions on the cheap; given that an ABC upfront buy in the 0.9-rated first hour of Tuesday prime fetched around $111,000 per unit, a reciprocal investment in “Jeopardy!” may have called for a $280,000 price.

On the other hand, the small premium paid by advertisers that bought time in Thursday’s GOATcast paid off enormously. If you’re a Target or Trulicity and you’ve invested $186,000 for every :30 you’ve aired in “Grey’s Anatomy,” you saw your targeted impressions jump 69 percent with a Thursday night “Jeopardy!” buy that was only negligibly more expensive than your usual scripted order (+7 percent).

Ad inventory aside, the GOAT tourney offered a unique opportunity for ABC to align itself with the “Jeopardy!” brand—so much so that the network’s fingerprints were visible throughout the four-night run. The show’s producers managed to work in a great deal of promotional opportunities for the network; among the ABC-themed categories in play throughout the tourney were “David Muir Covers the World,” “Modern Family,” “The Bachelor,” “Dancing with the Czars” and “The Oscars.” An early “American Idols” [sic] category featured clues teed up by host Ryan Seacrest and judges Lionel Richie and Katy Perry.

None of which is to say that ABC actively foisted the promotional razzle-dazzle onto the GOAT event. “Jeopardy!” first began integrating brands into its gameplay nearly a decade ago, and producer Sony Pictures Television in recent years has included video clues for a number of theatrical films distributed by Sony Pictures Releasing, including “Ghostbusters” and “The Amazing Spider-Man 2."

For all the success of the “Jeopardy!” primetime run, this may prove to be an induplicable phenomenon. Addressing contestants Ken Jennings, James Holzhauer and Brad Rutter before the final Double Jeopardy! round on Tuesday night, host Alex Trebek suggested that the tourney was in all likelihood a one-off. “I don’t mean to be negative, but this is probably the last time we will see the three of you competing as contestants on this program,” Trebek said.

That valedictory note was echoed during the climactic Final Jeopardy! round, when Rutter closed out his run by scrawling “Who is, ‘You’re the best, Alex!’” on his telescreen. “It’s true, and I should get credit for it,” Rutter said, to the cheers of the studio audience.

If the GOAT tourney proves to be the capstone to Trebek’s TV career, the unlikelihood of a reprise may have less to do with his illness than with the nature of “Jeopardy!” itself. Speaking last week at the Television Critics Association press tour, Trebek said that the meteoric rise of Holzhauer largely made the primetime showdown possible.

“This tournament would not have been possible if it weren’t for James’ appearance on our program, because there was never a third candidate that we could put in against Ken and Brad [that would] make it plausible,” Trebek said. “And now, all of a sudden, ‘Hey, this is great television.’”

Trebek went on to say that the only way to top the GOAT tournament would be to stage a follow-up showcase with the three champs “in 10 … or 15 years.” Trebek will celebrate his 80th birthday in July.

For his part, Jennings said his victory in the GOAT tourney will probably serve as his “Jeopardy!” swan song, telling the Seattle Times, “At some point, Alex is going to retire and I can’t imagine playing ‘Jeopardy!’ with a different host. This seems like the right time to go out on top.” For his part, during his final on-camera chat with Trebek, Holzhauer said he planned to “see what the world of media has to offer.”

When asked how his life would change after the tournament ended, Rutter simply said, “I’m going to miss you, Alex. That’s a big part of it. It’s been a privilege and an honor to have been associated with this program.”

Trebek told the Television Critics Association crowd that he has no plans to retire “in the near future.” And while that’s the best possible news for fans of the syndicated show, a follow-up to the primetime showcase would appear to be out of reach.