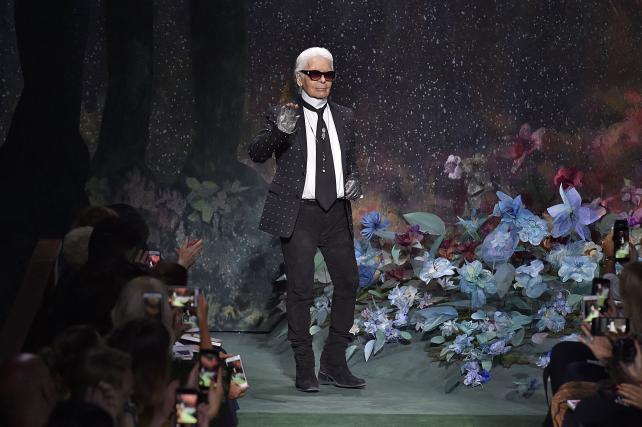 Karl Lagerfeld, the German fashion designer who helped set the industry standard for five decades with collections that dressed celebrities such as Princess Diana and actress Keira Knightley, has died. He was 85 years old.

The creative director at closely held Chanel for more than 35 years, Lagerfeld was among the fashion trade's most prolific couturiers, producing outfits for the Paris-based luxury-goods maker, for Italy's Fendi SpA and for his own label—all at the same time. Recognizable for his high-collared shirts, white ponytail, dark sunglasses and black fingerless gloves, Lagerfeld had a client list that featured stars of the stage and screen, including actresses Nicole Kidman and Cate Blanchett and the singer Pharrell Williams.

Lagerfeld "was ahead of his time, which widely contributed to the Houseof Chanel's success throughout the world," Chanel CEO Alain Wertheimer said in a statement. "Not only have I lost a friend, but we have all lost an extraordinary creative mind."

In announcing Lagerfeld's death, Chanel said Virginie Viard, his second-in-command for three decades, will take over creative work for the collections "so that the legacy of Gabrielle Chanel and Karl Lagerfeld can live on."

The fashion guru, who earned the nickname "Kaiser Karl" for an uncompromising approach to his work, joined Chanel in 1983, more than a decade after the death of founder Gabrielle "Coco" Chanel. He set about reviving the French maker of perfume and accessories with a modern look on its ready-to-wear lines, helping it become one of the industry's most successful companies.

"What I do Coco would have hated," Lagerfeld said in "The World According to Karl," a 2013 book of his quotes. "I do what she never did. I had to find my mark. I had to go from what Chanel was to what it should be, could be, what it had been to something else."

An accomplished photographer who counted Helmut Newton and Andy Warhol as friends, Lagerfeld was the No. 1 designer at Chanel, whose headquarters are two 18th-century buildings on Paris's Rue Cambon. He considered the shirt the most important fashion item; defended Fendi's use of fur against the protests of animal-rights activists; and said that wearing sweatpants is a sign "you lost control of your life." Vogue crowned him the "unparalleled interpreter of the mood of the moment" in 1997.

"We owe him a great deal: his taste and talent were the most exceptional I have ever known," said Bernard Arnault, CEO of Fendi owner LVMH, in a statement. "Fashion and culture has lost a great inspiration."

Alongside figures like Arnault and Italy's Giorgio Armani, he was instrumental in turning luxury fashion from a niche proposition into a global commodity with mass appeal. His runway shows pushed Chanel's extravagance to the extreme—building forests, waterfalls and beaches in Paris's Grand Palais—while the price tags on Chanel's handbags and tweed suits pushed skyward. He managed to preserve Chanel's image as the ultimate luxury, while perfumes and nail polishes made the brand accessible to anyone.

A sharp-tongued person with a bold disposition, he once gave an entire interview to Harper's Bazaar about his cat, Choupette, with whom he shared a special bond, and said he avoided having children because it "makes you look 100 years old" when they become adults. His public comments also betrayed a willingness to offend anyone, taking aim at German Chancellor Angela Merkel's choice of pants, former U.S. first lady Michelle Obama's hairstyle and the body weight of English singer Adele.

Born Karl Lagerfeldt on Sept. 10, 1933, in Hamburg, he later dropped the final letter in his surname to make his fashion brand more marketable. Lagerfeld's year of birth is sometimes given as 1938, a discrepancy that he refused to solve in interviews. His parents were Elisabeth Bahlmann, who was Swedish, and Otto Lagerfeldt, who made a fortune producing condensed milk in France and selling it in Germany. Lagerfeld had an older sister, Martha, and a half-sister, Thea.

"My problem as a child was that I was bored to death because I wanted to be a grown-up person," he said in a 2011 interview with the U.K.'s Independent newspaper. "My childhood was endless—from eight to 18 felt like hundreds of years."

At 14, Lagerfeld moved to Paris, where he studied drawing and history, spending much of his time alone while his parents traveled. After developing an interest in drawing cartoons, Lagerfeld designed a coat that won a contest run by the International Wool Association.

Lagerfeld then worked for Pierre Balmain and Jean Patou, for whom he was artistic director until 1963, when he went to Italy for a job at Fendi. That relationship lasted more than 50 years. During the 1970s, he designed for Chloe and switched to Chanel in 1983. He began his own label the following year, describing it as "intellectual sexiness."

Lagerfeld lived in Paris and had various residences over the years, including a chateau in Brittany, a palace in Monaco, a villa near Hamburg, apartments in Berlin and Rome, a villa in Biarritz, France, and a house in Vermont, according to The New York Times.

"I would like to be a one-man multinational fashion phenomenon," he once said.