Kilborn's Comedy Central Successors Have Passed Him By in Dobrow's Eyes

Here's how my DVR describes "The Kilborn File": "Craig Kilborn interviews celebrities and human interest guests." As far as robo-captions go, it checks out. The show does indeed devote a goodly percentage of its 22 non-ad minutes to guests that are, at least in theory, interesting to humans. 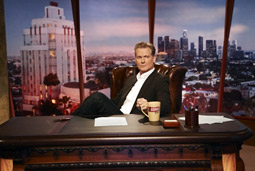 'The Kilborn File' doesn't inspire critical wrath as much as pity.
Unfortunately, the caption omits other pertinent information, like "Craig Kilborn nods his way through those interviews" and "Craig Kilborn proudly displays his smirk implant." It doesn't highlight the too-easy Hasselhoff cracks or reference the myriad please-YouTube-me bits ("Speed News," "Thought of the Day," "File This Under 'Disturbing'") littered throughout the half-hour. The caption makes the show sound much more compelling than it is.

In practice, the only thing saving "The Kilborn File" from anointment as the least-watchable talk show in the history of western civilization is its length. It can only pack so many self-pats on the back and stale pop-culture references (a recent ep hit the Solid Gold Dancers/Electric Boogaloo/Yahoo Serious trifecta) into 30 minutes. By contrast, Chevy Chase and Magic Johnson inflicted their particular brands of torture on viewers for a full hour.

Why is this here?

Thus I'm not going to review "The Kilborn File" so much as try to understand it. Why is it here? Whose fault is this? The show doesn't inspire critical wrath as much as pity. My instinct isn't to rip "The Kilborn File"; it's to sincerely inquire as to the well-being of the people who birthed it, and offer them a reassuring hug as I drape a warm shawl over their shoulders.

Little about this show makes sense. Launching it on the Monday preceding the 4th of July feels like a half-hearted attempt to hide the incriminating evidence. Its test-balloon debut in a mere six markets -- New York City, Los Angeles, Philly, Boston, Phoenix and Austin -- appears less likely to prime the pump for a massive countrywide rollout in the fall than to say "Okay, we tried -- you can have your 'Simpsons' reruns back now."

Even the format feels unbalanced: Kilborn emerges from the wings and heads straight to his desk, then fires off eight straight minutes of overlapping jokes. During this sort-of-monologue (a chairologue?), the "Kilborn File" logo swooshes across the screen between gags, as if to cue the viewers that one joke has ended and another is soon to commence.

As for those gags, they alternate willy-nilly between celebrity takedowns and riffs on oddball news. The only connecting thread is that few elicit laughs: "There will be no nudity or alcohol allowed in Missouri strip clubs anymore, all due to a bill signed last week by Governor Billy Buzzkill!" Hell, some don't even make sense: "A New York bar owner is being charged with hiring a man to beat up a food critic who had panned one of his eating establishments. Ironically, the critic gave the beating five stars." There's a joke in there, maybe, but where? Where, man, where?

Kilborn has also regressed as an interviewer. Last week, during his chat with Sam Jaeger, Kilborn couldn't be bothered to appear interested. His questions included, "Tell me about the indie movie. What'd you do -- write, produce, star?" and "Your wife -- is she an actress?" He compounded the indifference by responding to Jaeger's rote answers with "that's hilarious" (two times) and "I love that."

But this came off as Frost/Nixon compared to Tuesday's chat with Ryan Kwanten. In order, Kilborn asked the actor about Los Angeles; about "a story involving Steven Spielberg"; about the American literary classics with which he wasn't familiar; and about "the shark story." Few surgical procedures are less spontaneous. The segment didn't just suck the life out of the studio; it sucked the life out of my living room. Plants sagged. Couch cushions de-poofed.

And then there's the set...

What else? The set looks like a hotel lobby. The graphics are community-access caliber. The sidekick interaction is less two-pals-shooting-the-bull than traveling-salesman-tries-to-forge-new-special-friendship-at-hotel-bar. I've spent the last 10 minutes trying to come up with something positive to say about the show; the best I can do is, "everybody on it has nice teeth."

Dating back to his "SportsCenter" days, I've always thought Craig Kilborn was a funny dude. He meshed Letterman's deadpan with a game-show host's deliberate smarm, and would have been a much bigger star had there been a viral-video universe in which to cultivate his go-to "Daily Show" bits.

The problem is that the job at which he excelled has passed him by. Whereas a talk-show host could once get by with a quip and a smirk, Kilborn's Comedy Central progeny have raised the personality bar. It's no longer enough to throw out a one-liner and bask in the studio audience's appreciative bleats. Hosts now need a distinct identity, comic or otherwise.

Kilborn, then, comes off as a graduate trotting out his senior-year shtick at a class reunion 15 years down the road. On "The Kilborn File," he's a man out of time.