And Why It's Not Necessarily an Endorsement for the Power of Print
READ THIS NEXT
Watch Elon Musk’s awkward ‘SNL’ promos—plus, why his hosting stint is so controversial

CHICAGO (AdAge.com) -- Storied lifestyle and food magazines like Gourmet have shut down, but that hasn't stopped Kraft from deciding to start charging a subscription rate for its formerly free custom publication, Food & Family magazine. While some could see that as a positive endorsement of the power of print, Kraft actually views it as an opportunity to divert more resources online. 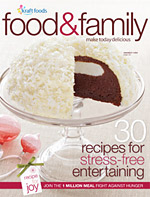 "The world is going more and more digital," said Kelley Woodland, director-CRM at Kraft, who oversees the magazine, e-mail newsletters and the iFood Assistant app. She added that research made it clear that while some consumers want culinary inspiration while standing in the grocery aisle, others want something "a little more leisurely, more aspiration and inspiration for future cooking, but not for that second of that day." And the print product will still be a great resource for the latter. However, consumers who want that inspiration will have to pay extra for it.

Consumers can still download monthly issues of Food & Family free from Kraft's website, but those who want the print version need to pay $14 a year. Ms. Woodland describes the publication as being "bigger than Food & Wine, and not yet a Cooking Light." The publication grew to 5.5 million in circulation over just eight years, and Kraft realizes asking consumers to pay will likely mean a smaller circulation. Already, Kraft has about 1 million paid subscribers -- albeit most of them at a reduced $7 introductory rate. The subscriptions have come in during an eight-week period. Ms. Woodland adds that the 4.5 million extra subscribers aren't lost, but still get a weekly e-mail from KraftFoods.com.

Kraft is reinvesting its savings to connect better with those who want to be reached digitally. "We're trying to be where consumers are, where they want us and how they want us," Ms. Woodland said. "They're engaging more and more online, mobile, social media channels. The conversation comes from the consumer."

To that end, Kraft is looking to offer more in those platforms. The company recently launched a Kraft Foods Facebook page and Twitter handle, as well as a YouTube cooking channel. Kraft has already explored these media with individual brands. Still, the company recognizes that some of its consumers will want to stick with the magazine.

"People who are into Food & Family magazine are into Kraft food solutions and recipes," she said. "What we're providing is the convenience of food solutions." Kraft recipes, for instance, minimize the number of ingredients, whereas other cookbooks or magazines typically carry recipes that have 10 or 12 ingredients.

Kraft's consumer research has found its consumers want dishes that can be prepared quickly and easily -- with a few ingredients most people have on hand. "Our recipes are very low risk," she said.

In the meantime, Kraft is testing a variety of ways to have more meaningful connections with consumers. The company recently updated its iFood Assistant, released a free "Lite" version, and an application for Blackberry.

Emily Bryson York
View all articles by this author