Why It's Getting Harder to Find a Good Magazine Newsstand

NEW YORK (AdAge.com) -- Magazines had better hope they get a nice prominent digital newsstand on the tablets flooding the market, because their bricks-and-mortar retail outlets are continuing to disappear. 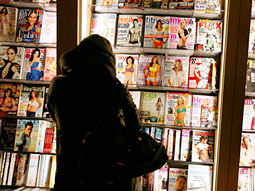 Magazines' retail outlets in North America sank by 18,000 between December 2007 and this month, an 11.3% decline to 142,000 in just three years, according to the Magazine Information Network, or MagNet, which tracks magazine sales. In the United States magazine retail outlets declined 11.4% to 117,000, MagNet said.

And you can blame some of that decline on convenience stores' decisions to stop carrying skin mags. But more on that in a moment.

Although subscriptions comprise the vast majority of most magazines' circulation, newsstand sales are crucial for the impulse purchases that can lead to subscription commitments.

After the 'men's sophisticates' go...
There are plenty of reasons for the sales declines, but a falling number of retail outlets for magazines doesn't help. Convenience stores that sell magazines have declined significantly, partly because many decided to ditch magazines like Playboy, Hustler and Penthouse, according to Gil Brechtel, president-CEO of MagNet.

Even as specialty retailers such as Home Depot and Linens 'n Things have increasingly stocked magazines, meanwhile, big box stores such as Walmart have been driving smaller superettes and local drug stores out of business.

Smaller volume at Linens 'n Things
Walmart has been giving less prominence to magazines in its own stores, moving the big magazine racks to the back, Mr. Brechtel said. And Linens 'n Things just doesn't generate the same newsstand sales as a traditional store with a wide selection of titles.

So are the declines impossible to slow or stop?

"The other factor has been the economy," Mr. Brechtel said. "When the economy improves we will see a steadying of single-copy sales. I would think that there will probably be a continual decline, but perhaps not as quick as previously."