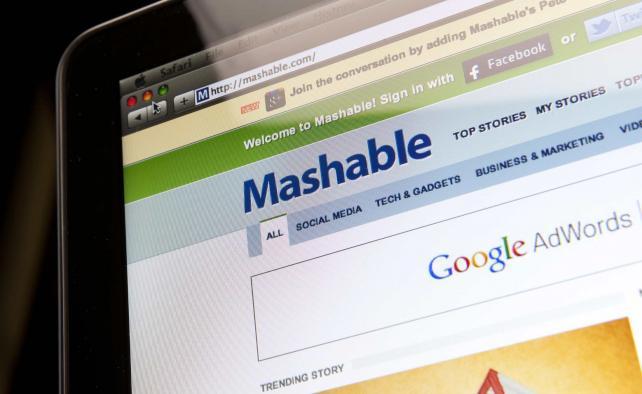 Mashable is exploring strategic options including the sale of all or part of the online media company, according to people with knowledge of the matter.

Mashable, founded in 2005, may draw interest from buyers in Europe and the U.S., said one of the people, who asked not to be identified discussing private information. The company said Tuesday it hired LionTree Advisors months ago to seek more capital and isn't in conversations about a sale.

Pete Cashmore, who founded the media company at age 19 in Aberdeen, Scotland, held talks to sell Mashable to CNN about five years ago. The publisher offers European companies a foothold in new, online media popular with younger audiences. U.S. companies are already well entrenched in this area. Time Warner, parent of CNN, is one of Mashable's major investors and led a $15 million funding in March 2016. Walt Disney holds a stake in Vice Media and Comcast has backed BuzzFeed, Snap and Vox Media.

"We have hired a bank," Mashable said in a statement. "And as we also have said in the past, we hired them to raise capital from a strategic partner or a financial."

Mashable needs cash to support its foray into producing video, a more costly endeavor than the written journalism that marked the company's earlier years. Mashable is producing short-form shows for Facebook, Bravo and others, and is collaborating with Time Warner's Turner Broadcasting. The company can earn more money from advertisers for video.

Mashable says its videos are generating 1.6 billion views a month, a fivefold increase from a year earlier.

The business is valued at around $250 million, the Information reported in April. Cashmore has been loath to dilute his stake without receiving a significant increase in valuation, one of the people said. Other online media startups, such as BuzzFeed, have raised money at little to no increase in valuation in the past couple years.

Covering social media
Mashable was one of the first news outlets to cover social media, attracting attention from newspapers and TV networks slower to discover the emergence of internet culture. Mashable's early popularity and success transformed Cashmore into a media darling.

Time magazine named him one of the world's 100 most influential people in 2012, and Cashmore became a regular on the speaking circuit at media conferences the world over. The company still hosts one of the largest parties at South by Southwest, the annual festival celebrating music, technology and film.

Yet as every other media outlet caught up with Mashable, the company has shifted strategy a couple times. Cashmore hired former New York Times editor Jim Roberts as editor-in-chief in 2013, and Roberts pushed the company to cover more serious news stories.

Mashable's work under Roberts earned praise from media pundits, and attracted investment from Time Warner. But online writing isn't much of a business, and Roberts left three years later, as the company fixed its eyes on original video.