Meredith is launching a (yes, print) mag, drama at The Intercept, and People gets a new editor: Publisher's Brief | Ad Age
Skip to main content
Sign In Register

Meredith is launching a (yes, print) mag, drama at The Intercept, and People gets a new editor: Publisher's Brief

Meredith Corporation, the Des Moines, Iowa-based publishing conglomerate, is launching a new magazine—yes, an actual physical, ink-on-glossy-paper thing. It's called Happy Paws, it's for dog and cat owners, and it's being produced in partnership with a veterinarian-led organization called Fear Free. 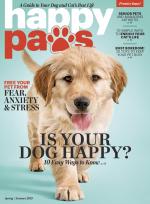 The debut issue of Happy Paws.

The first issue will hits newsstands on April 9 with a $9.99 cover price; a second issue is slated to go on sale Oct. 11, and by the end of the year Meredith plans to make a decision about frequency going forward based on consumer demand (350,000 copies of each issue will be distributed nationally). VP and Group Publisher Scott Mortimer tells Ad Age that Purina, which already works with Fear Free, is the lead sponsor of the premiere issue.

As for Meredith's decision to partner on the launch, Mortimer says that "We know that pet content is one of the best-selling categories in our Special Interest Media Group. We also know that pet coverage across our Meredith brands from People and Real Simple to Southern Living and Family Circle is extremely popular."

And while the internet is obviously awash in animal-related adorableness, Happy Paws' content is meant to be authoritatively servicey; the first issue's line-up will include articles on "helping your pet overcome fears and anxieties" and "training methods that build communication and trust."

Fear Free's founder is Dr. Marty Becker, aka "America's vet," and the organization describes itself thusly:

Our mission is to prevent and alleviate fear, anxiety and stress in pets by inspiring and educating the people who care for them. ... Founded in 2016, Fear Free provides online and in-person education to veterinary professionals, the pet professional community, and pet owners.

Podcast power: "'The Daily' has revolutionized our business. It's the first product I've ever sold that has more demand than supply." That's Sebastian Tomich, global head of advertising for The New York Times, talking about the news organization's wildly popular flagship podcast in Ad Age Editor Brian Braiker's latest "Ad Lib" podcast. Stream the full episode here: "What The NYT's head of ads thinks about being 'subscription-first.'"

Laura Poitras—the "Citizenfour" director and award-winning filmmaker who helped start The Intercept's parent company First Look Media—lashed out Wednesday after layoffs were announced internally at the publication, according to emails obtained by The Daily Beast. "I am sickened by your decision to eliminate the research team, which has been the beating heart of the newsroom since First Look Media was founded, and has overseen the protection of the [NSA leaker Edward] Snowden archive," she wrote. "I am also sickened by your joint decision to shut down the Snowden archive."

Cagle out: Entertainment Weekly broke some news Wednesday afternoon about one of its own:

Jess Cagle, a 32-year veteran of Time Inc. (now Meredith) who helped launch Entertainment Weekly in 1990, is stepping down from his role as editor in chief of People. His last day with the company is March 31. ... Under his leadership at People, the editorial team published special books, significantly ramped up its digital content production, and produced numerous TV programs such as the People Magazine Investigates franchise on Discovery ID, and a live daily web series, People Now, on People's OTT network, PeopleTV.

Wakeford in: Meredith announced this morning that Dan Wakeford, a People deputy editor since 2015, will be the next EIC. The New York Times' Jaclyn Peiser serves up some highlights from his résumé:

Mr. Wakeford, who will take over April 1, got his start in London in the late 1990s, when he worked in TV production and covered celebrity news for UK News, a subsidiary of Rupert Murdoch's News Corporation. In 2000, he revamped a British magazine, Heat, increasing its circulation to nearly 600,000 from 40,000. In 2002, Mr. Wakeford moved to the United States to become the news director of In Touch Weekly, a celebrity gossip magazine started that year by Bauer Publishing and sold last year to American Media Inc., the company behind The National Enquirer. He became the editor in chief of In Touch Weekly in 2012.

Laborious: Condé Nast's foodie site Epicurious briefly had a messy little labor-related controversy on its hands. On Twitter, Doree Shafrir, a veteran of BuzzFeed, Rolling Stone and Gawker, helpfully lays it all out with screenshots of an (elaborate) Epicurious "full-time freelance" job description, followed by a tweet from the New York State Department of Labor:

Some clarification on the EA job I tweeted about yesterday: This job will in fact be eligible for benefits, including health insurance, 401k, and sick leave. Also, "building 30 recipes a month" refers to a data entry task—it is not recipe development.

And finally... Time is out today with an animated version of its latest cheeky cover (the issue hits newsstands tomorrow):