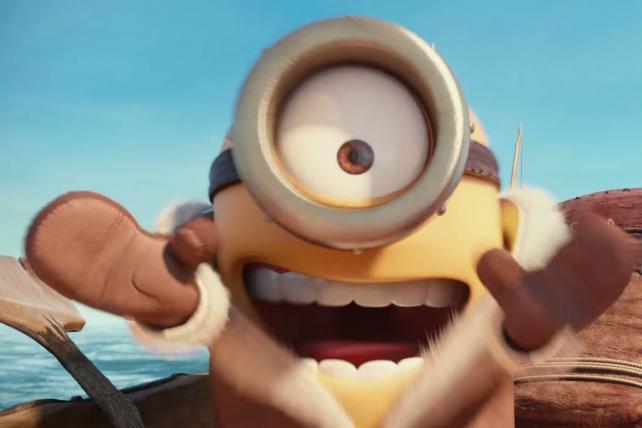 Universal Pictures is undertaking one of its biggest-ever marketing campaigns to promote "Minions," an animated spinoff film about yellow creatures that's poised to join the $1 billion box-office club.

The studio has decorated theaters with giant Minions, put yellow labels on half a billion Chiquita bananas and joined with more companies than ever, including Amazon.com Inc., General Mills Inc., McDonald's Corp., studio parent Comcast Corp. and Snapchat. Partners alone have delivered $593 million in ads and promotions, Universal said.

Of the partners' $593 million in spending, less than half was for ads such as TV and print, the rest being the estimated value of promotions, for example using Minions on cereal boxes, according to a person with knowledge of the matter who asked not be identified discussing non-public information. Universal isn't disclosing its own additional marketing costs.

Universal itself began promoting "Minions" on TV in December, an early start for a summer release. The spots included a $4.4 million ad during the Super Bowl on Comcast's NBC network, according to researcher iSpot.tv. Total spending on national TV ads for the film amounted to $23.4 million through July 8.

A spinoff from the successful "Despicable Me" series, "Minions" may hand Universal the box-office lead for the full year, its first win since at least 1998. Only two animated films -- "Frozen" and "Toy Story 3" -- have ever topped $1 billion in global sales, and both are from Walt Disney Co., the main rival for this year's bragging rights. Disney has new Marvel and "Star Wars" films on tap this year.

"Universal is a lock to win the year," said Barton Crockett, analyst at FBR & Co.

"They end up right now being the best parts of the whole acquisition," he said.

U.S. theaters
Universal leads the domestic box office this year by a wide margin, with $1.53 billion in sales as of July 5, compared with $1.15 billion for No. 2 Disney, according to researcher Box Office Mojo. Universal has been bolstered by "Jurassic World," the top domestic film of the year, along with "Furious 7," the No. 1 film worldwide, and "Fifty Shades of Grey."

The toylike Minions are a perfect tie-in for marketers, which carried a lot of the advertising burden for Universal in exchange for rights to use the characters to promote their own products.

The film is a prequel, starting with the development of the Minions from one-celled yellow organisms. The creatures, who have their own language, fall into the service of the evil Scarlet Overkill and have to save all of Minionkind.

BoxOffice.com forecasts opening weekend sales of $114 million in North America for "Minions" and $345 million for the film's full run in domestic theaters. The picture could also yield $700 million internationally. Advance sales so far are outpacing Disney's Pixar feature "Inside Out," according to online seller Fandango.

The movie does face obstacles. Past films in the series rated better with critics. And in "Minions," the non-English-speaking creatures move from a supporting role to center stage, according to Robert Marich, author of "Marketing to Moviegoers: A Handbook of Strategies and Tactics." They're backed up with a voice cast that includes Sandra Bullock, Jon Hamm and Michael Keaton.

"The characters have become personalities unto themselves after the 'Despicable Me' films and the campaign has just been adorable" McCourt said in an interview.