Never Short of Optimism Anyway, Vice Sees Money 'Sloshing Around in the System'
READ THIS NEXT
TV giants see glimmers of hope for the ad market 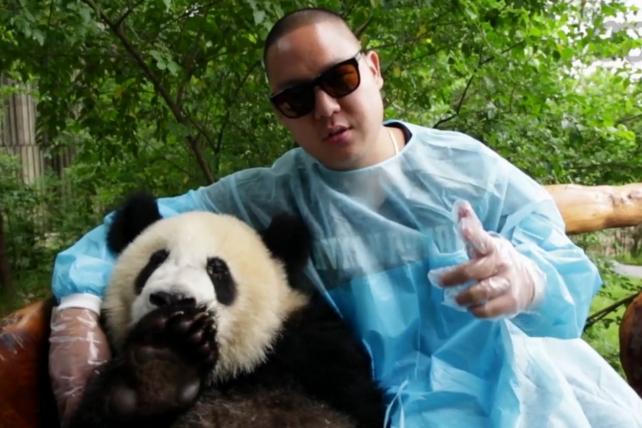 Vice series 'Fresh Off the Boat' with Eddie Huang
Credit:

Vice Media, the company that combines punk culture with online journalism, is poised to double revenue to $1 billion by 2016 and may pursue an initial public offering, co-founder Shane Smith said.

The company, backed by billionaire Rupert Murdoch, expects to reach that mark in 12 to 18 months, with profit margins targeted to widen to 50% of sales from 34% now, Mr. Smith, 44, said in an interview with Bloomberg TV.

The question is whether investors would agree with that.

"We'd be stupid not to test what the market would bear," said Mr. Smith, who is CEO. "There's a lot of money sloshing around in the system, obviously valuations are high."

Closely held Vice Media, based in New York, supplies news and entertainment online to young audiences. It sells a program to Time Warner's HBO and produces "The Vice Guide to Everything" for Viacom's MTV. Reporters file stories that shun conventional journalism rules and often include profanity. In one episode on MTV, they sneak into North Korea as tourists and hang out with a Russian mobster.

Murdoch's 21st Century Fox acquired about a 5% stake in Vice Media last year, according to Smith. The price was $70 million, Fox said in a regulatory filing, suggesting a valuation of $1.4 billion. The investment came after Mr. Smith and Mr. Murdoch, 83, chatted over drinks at a bar in Brooklyn. Mr. Murdoch's son, James, sits on the company's board.

"One of the reasons we did the Fox deal was to stay independent, so we could run the business the way we wanted to run it," Mr. Smith said. "I vote 95% of the board, so it was a great deal for us. And it's helping us expand into India, Europe, South America."

Other investors, with board seats, include MTV founder and former Viacom CEO Tom Freston, the advertising agency WPP and Raine Group, an investment bank, Vice Media said in 2011.

Vice Media started out as a small punk magazine in Montreal in 1994, then moved into video after making its content available online. Its events and programs draw sponsors including Intel Corp., AT&T Inc. and General Electric Co.

The company produces the HBO show "Vice," which provides reports from areas of conflict around the world. Conventional media outlets struggle to reach the company's young male audience, Smith said. Vice Media's main YouTube channel has 4.4 million subscribers while the newer Vice News has 236,597, according to the website.

Vice Media has 35 offices around the world. It's expected to post revenue of $500 million this year, the Wall Street Journal reported in January, citing a person close to the company. USA Today put 2012 sales at $175 million.

The company is producing so much TV programming worldwide that Mr. Smith said he is considering starting or buying a cable channel. "We are looking at various opportunities because there is such a destratification going on in media right now," Mr. Smith said. "We can look at buying distressed media assets and then see if we can't turn them around."